The Akron Lamp Co. referred to their No. 81 lamp, the Portable, as their original lamp and said it was patented on November 26, 1912. This torch lighting lamp, in Mike Ogilvie’s collection, is advertised in Catalog No. 18, circa 1916. The burner (lower image) includes three rods to support the burner – one from above and two to hold the cowl on the sides.

Model 84 by the Akron Lamp Co. is a torch lighting model that appears in their 1916 catalog. The tip cleaner door is pointed at the bottom (to the left of the air tube). This lamp is in Doug Dwyer’s collection.

This lamp is stamped Akron Gas Lamp Co. It has the appearance of a torch lighting model but with a generator. This Model 92 appears in a 1919 advertisement for Akron products, and probably dates to 1919-20 according to Neil McRae. This lamp is in Doug Dwyer’s collection.

This Diamond salesman’s kit (above) includes a price list dated Feb. 1, 1922. The Diamond lamp Model 102G  with the original shade and mantles was in this kit. This kit and the separate lamp and shade (below) are in Fil Graff’s collection. 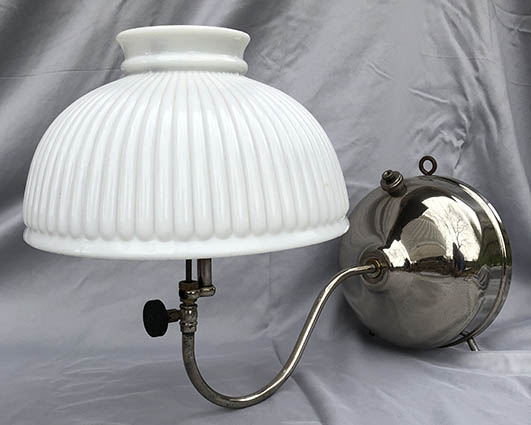 Akron’s Model 105G chandelier lamp with shades as original provides light and warmth in Randall Adams’s home on a winter night. Randall, who restored the lamp, learned that it once hung in a speakeasy (a bar that served alcoholic beverages during Prohibition) in Nevada.

The Akron Lamp Co. also made a Model 106G bracket lamp. The same ventilator and mica globe were used on the Model 103 lantern. The lamp below is not typical as it lacks the nickel plating and support pegs for the fount. It is hung by a keyhole tab on the back, not a ring. The lamp above was in the late David Jahn’s collection, while the lamp below is in Craig Seabrook’s collection. 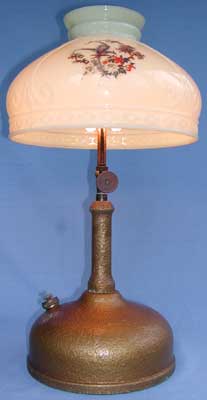 Akron’s Model 120-BG is another 300 c.p. two mantle gasoline lamp. This match lighting lamp, in George and Nancy Remkus’ collection, also requires a separate pump. The Gold Krakel finish on the fount and handle is complemented by the Cremax Diamond shade with two peacocks decals on the four panels (hence the B in the model suffix).

Akron Model 120-AG was also sold in the late 1920s as an Art Lamp with the same “antique bronze” finished fount and handle as on the 120-BG lamp above but with “a shade finished in a charming burnished ivory background with a delicately hand decorated rose design in the natural and pleasing colors of rose and green.” This lamp is in Ken Brown’s collection.

Akron made this match lighting lamp for Montgomery Ward. The lamp requires a separate pump. The art-deco finial would have held a parchment shade that was likely protected by an inner hanging mica globe. A similar model but with a gold painted fount was advertised in a 1932 Montgomery Ward catalog.

Akron made a Utility Lamp, Model 121G, seen here with the earlier “…opal white…” shade (left) in Jerry Engbring’s collection, “…ivory-gold glass shade of modernistic design.” in John Anderson’s collection (middle), and with a green with black accent painted fount (right) in Dean Dorholt’s collection. This lamp is a two burner, 300 cp model. The shade in the center image was available for this lamp and Model 125, see below, in an Akron catalog from mid-1941.

This “S-shaped” generator is from the green and black finished 121 lamp above. Note the fine mesh brass screen inserted into the bottom of the orifice, to the left of the letter A, presumably to filter out loose carbon particles that could plug the orifice. While carbon buildup inside the generator with continued use will eventually plug the generator, until that time the screen may reduce the need to prick the tip of the generator to allow fuel to continue to flow to the burner (McRae). Other Akron lamp and lantern models from the late 20’s and 30s with this match lighting generator may also have this feature. 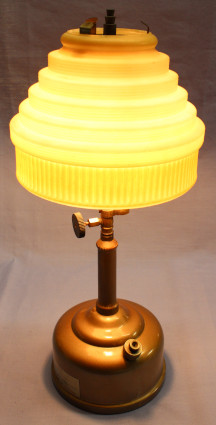 This Model 121 has a tan painted fount that Akron used on several lamp models. Dean Dorholt ran the lamp with his “…ivory-gold glass shade of modernistic design.” for the upper image. The finial for the shade holder is an Art Deco design as is the shade. The instructional decal on the side of the fount (lower image) is more readable than most. The bottom line says: Do not operate before reading printed instructions. The filler plug is marked for the Akron Lamp Co. rather than a reseller such as Sears.

This Model 125 Utility Lamp is instant lighting, as evidenced by the generator tapered at the bottom and the tip cleaner knob just past the upper left corner of the square fiber valve wheel. The instructional decal includes using gas or kerosene fuel (lower image, courtesy of Dean Dorholt). This lamp, in Ethan Cosby’s collection, also appeared in the 1941 catalog and came with the “…ivory-gold glass shade of modernistic design.” as on the above lamps. The retail price for this lamp and shade was $5.95 in 1941.

Akron Model 140-BG (left), in Kelly Williams’ collection, has an Instant-Glo generator and tip cleaner. Akron also made a similar lamp for Montgomery Ward (center and right), in John Anderson’s collection, but without a built-in pump and Instant-Glo lighting. The lamp founts and handles were finished in “statue bronze” paint (close-up on the right) by Akron (Neil McRae). These lamps are seen here with Akron Cremax shades. 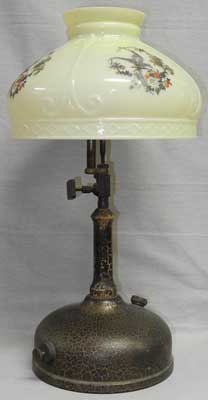 In early 1930’s versions, before the Instant Glo patent was approved (middle image), Akron made these Model 140-B lamps with an earlier round handle (not hexagonal as above) and finished it in nickel (left & center) and Gold Krakel paint (right – in the Tongass Historical Museum, Ketchikan, Alaska). These 140-B versions came with a Cremax shade;”>as on the above right; the lamp on the left has the Diamond shade.

Two of these Akron vase lamps in the Art Deco style with Instant-Glo generator’s date to 1938
when they were sold as Models 486B7257 (upper right) and 486C7258 (lower) by Montgomery Ward (McRae). The third lamp (upper left) may also have been sold by Montgomery Ward around the same time. The lamp on the upper left is in Jon Schedler’s collection. The lamp on the upper right was in Dick Sellers’ collection. The lamp below, in John Anderson’s collection, has the lamp fount removed from the pottery vase to show the construction.

This Diamond brand floor lamp by the Akron Lamp Co. (left & middle) is in Craig Seabrook’s collection. It features the original parchment shade. The close-up views (center & right) reveal the characteristic Akron Instant-Glo generator and square/diamond valve knob. The image on the right is of the fount and burner of this lamp, running, in Fil Graff’s collection.

Montgomery Ward sold this Model 450F5418 Akron pottery lamp in the 1933 catalog for $7.45 with a 16″ parchment shade. The metal fount inside the ceramic pottery held 1.5 pints of gasoline. This lamp was in the late Jerry Engbring’s collection.

Akron’s Model 155 also features Instant Glo lighting. The lamp is finished in an Art Deco style; The fount is chrome plated. The parchment shade and protective inner mica globe are missing. The fount holds 2 1/2 pints of fuel. This lamp is in James “Smitty” Smith’s collection.