“The Efficient” pendant arc lamp, No. 6, was manufactured by Irby & Gilliland in Memphis, Tennessee, 1899-1903. After selling these lamps for Irby & Gilliland, W. C. Coleman bought the company. This nickel plated lamp is in Dick Sellers’ collection. 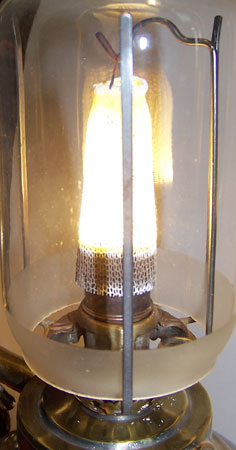 The Efficient was replaced by The Coleman Arc Lamp. It is also embossed Made by The Hydrocarbon Light Co., Wichita, Kan. This lamp, serial No. 8685, was restored to running condition by Jim Nichols and is now in Jim and Jan Nichols’ collection.

The Model R Reading Lamp with a # 74 shade in opal, left, and green cased, right. Less than 20,000 of this model were shipped between 1909 and 1916. Note the upper air regulator screws. The burner shape helps distribute heat from the mantles to the generator (center image). The lamp on the left and center is in Ron and Charleen Becker’s collection, while the lamp on the right is in Dwayne Hanson’s collection.

By 1917 Coleman offered to convert torch lighting lamp models to match lighting with a Quick-Lite burner. The Model R Reading Lamp had to be sent to the factory for conversion since the stem above the handle had to be cut and threaded. Dealers were advised to send the entire lamp; the conversion cost $3.50. This converted Model R lamp is in Dwayne Hanson’s collection. 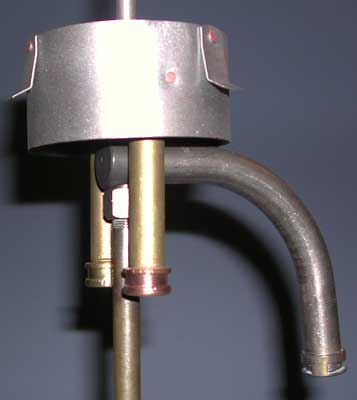 This early Model A, the first designated “Air-O-Lite,” was introduced 2 years after the Model R, in 1911. Fewer than 25,000 were made in the 13 months it was in production. It had a curved air tube and an improved burner. The 306 shade was the standard shade for this model; note the short shade supports. This lamp is in Jim & Jan Nichols’ collection.

The Nichols have run their Model A lamp with the optional green cased version of the 306 shade (Vantiger).

United Factories existed in Kansas City, Missouri from 1908-17. This company, like Sunshine Safety below, was presided over by William Hoffstot; both were located at the same address. This Model A, In Darcy Vantiger’s collection, is badged for United Factories (lower image). 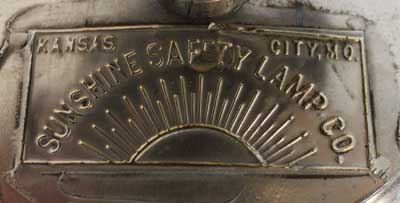 Coleman also made their Model A for Sunshine Safety circa 1912 when Sunshine Safety was a new company in Kansas City, Missouri. Shade holders varied in size and shape according to the shade to be supported (Hanson). In this case the “fancy shade” that Sunshine Safety supplied required the shade holder with the longer supports in the middle image. This lamp and original shade are in Dwayne Hanson’s collection. 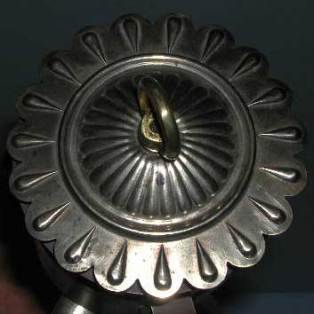 The Model H torch lit lamps were made from 1912 – 1916 and came with the 306 shade as seen here (left image). The heat bell in this model has a design limited to Models H and A (center image); heat bells help torch lighting models run as designed (Hanson). This lamp is in Jim and Jan Nichols’ collection. 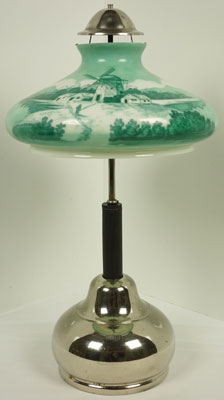 A later version of Model A or AA lamps was made from 1912-22. The burner assembly (left image) includes many of the same parts as on the early Model A, above on this page. A variety of shades were available including this 314A shade (right image), making the model number for this lamp AA314A. This lamp is in Dean DeGroff’s collection. 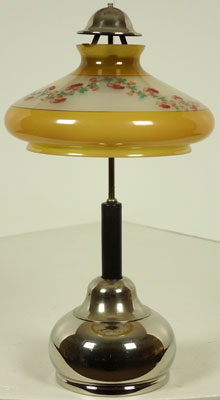 Model AA314B (left image), in Michael Merz’ collection, and 314C (right image), in Darcy Vantiger’s collection, were also made for this lamp model. Model AA314C has the optional (reproduction) fringe and was running when this image was taken. 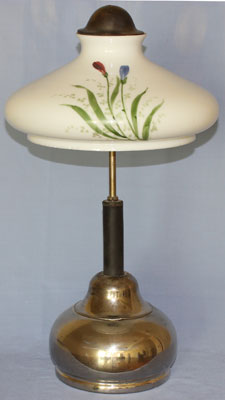 Coleman’s 314D “purple and red tulips” shade was unique because the patterns were different between the front and back sides (Vantiger). This shade, in Bruce Dolen’s collection, is seen here on a Model A lamp in Mel Taylor’s collection. 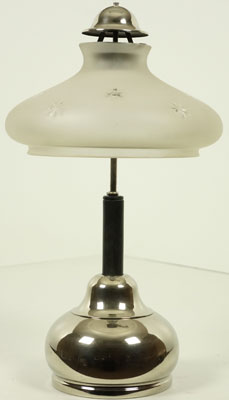 Model AA314E, in Michael Merz’ collection, includes the frosted (opaque) version of this shade and ten, 8-point stars cut into the glass.

There is not much information available on Model 35. This torch lighting gasoline lamp was made for several years circa 1915. It was unusual at the time because it had a straight-sided fount; so it was possibly a step in the development of the CQ lamp fount. The burner assembly is the same as on an arc lantern (Vantiger). This lamp is in Jon Heiderich’s collection.

The Model “M” Air-O-Lite (left) and Model “N” Air-O-Lite (right) lamps. The Model “M” was made in Wichita, Kansas, from 1915 to 1919. George Rocen also has the wrench and torch for preheating the generator on this lamp. The Model “N”, in Shirley Willard’s collection, lacks the tip cleaner of the Model “M” and dates to the same time period.

Model Q was made in 1916 – 17 using the same handle and fount parts as on Models M and N above. Since Coleman used the new “Q” match lighting burner on these lamps the model was simply referred to by that letter. The only marking on this lamp, in Larry Hillhouse’s collection, is the stamping on the fiber cap (lower image). 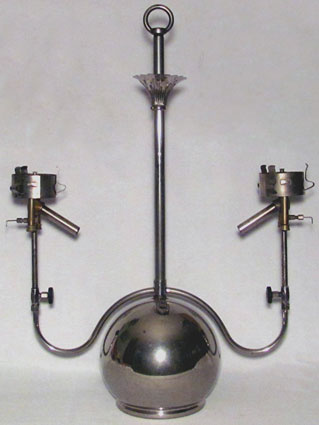 Coleman made the torch lighting Model P lamp from 1915 to 1918. This lamp has M burners as Model M above. The fiber valve wheels are unstamped. This lamp, in Ron & Charleen Becker’s collection, is stamped on the bottom: AIR-O-LITE, MODEL P,
THE COLEMAN LAMP CO.-WICHITA KANSAS. 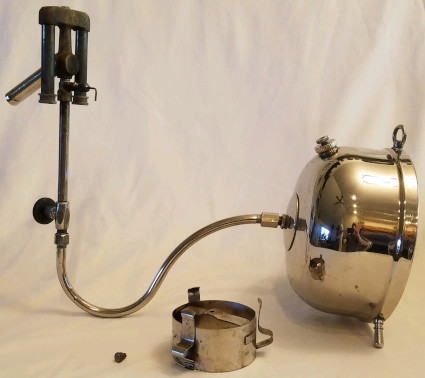 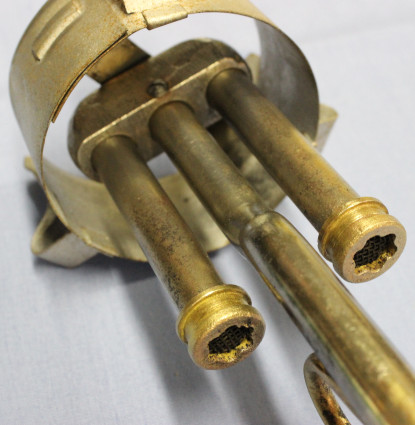 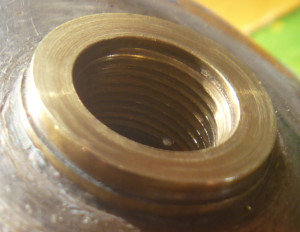 This early match lighting CQ lamp has a mixing chamber with a flat bottom and that has a screw to hold it in position on the air tube (upper right image). The shade holder support passes through the cylindrical sides with the end tabs bent up (upper images). The filler plug is round (upper left image) and the opening is flat (lower image) rather than with a round shoulder. This lamp, in Jon Heiderich’s collection, also has features of the early CQ lamp on the following page and likely predates it.