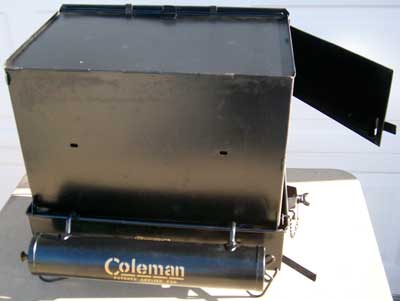 This early version of the Model 1 Coleman camp stove has an offset pump and air inlet valve screw in the left end of the tank (lower image). This stove, in Mike Murphy’s collection, also has top and front oven panels that separate from the rest of the stove
and store in the lid when it is disassembled.

This is another early Model 1 Coleman camp stove as the one above seen here completely restored by Joe Pagan. It could be purchased with a folding oven, baking grate for the upper half of the oven (lower image) and a heat diffuser – a flat metal sheet that covered the burners when the oven was being used. The lower half of the oven was accessed by tipping the entire oven back on its hinged lid. Model No. 1 was made in 1923-24, most of which came with the oven, according to Matt Moore. 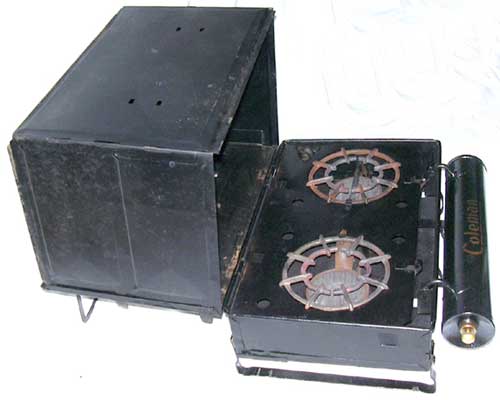 Coleman’s Model 2 stove included a folding oven, seen here in a tipped-back position. This model dates to 1924-26; This stove is in Randall Adams’ collection.

This early Coleman Model 2 stove has wire legs as on Model 1 stoves above but it also has the offset pump and air inlet valve screw in the left end of the tank as on the Model 1(not shown here). The most unusual feature on this stove, in Alex Swanson’s collection, are the latches to hold the case shut (lower image) that fold open to unlatch the stove and hold the oven when tilted back. 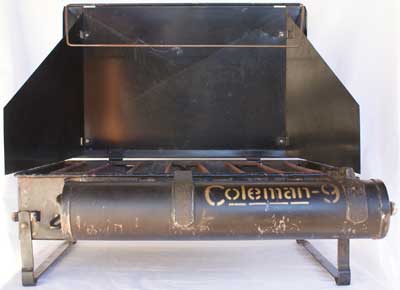 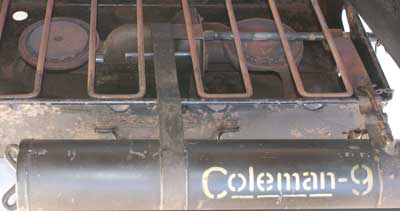 Coleman made the Model 9 stove from 1924-26. It is like Model 2 above but lacked an oven. Later Model 9 stoves have the Coleman 9 stenciling on the tank as on this stove in John Rugotzke’s collection. The wire attached to the lid (upper image) supports that part
to make a work space level with the cooking grate. 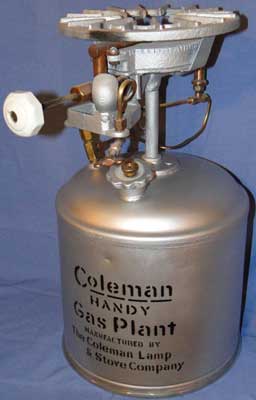 This early Model 5052 Coleman Handy Gas Plant in Dan Boschen’s collection can be dated to 1926 or later based on the name Coleman Lamp Co. & Stove Company stenciled on the fount. Dan hand cut a stencil template using another fount on which the original stenciling was still legible. 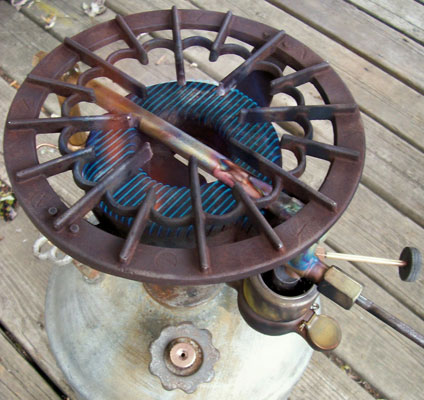 Model 5552 differs from 5052 above because it has a Blue Blaze Preheater. By opening the black fiber knob on the right (lower image) fuel will fill the reservoir on the preheater. A central air passage allows the burning fuel to heat the generator. This Handy Gas Plant, in Glenn Knapke’s collection, is labeled Coleman Lamp Co. so was made no later than 1925.

Coleman’s No. 4 urn burner is shown above mounted on a fount with fittings from another manufacturer, possibly W-M-P MFG. CO. Lohrville, Iowa, which is printed on the pressure gauge. The fount measures 11″ high x 10″ in diameter. The urn burner has a replacement valve stem and is missing parts of the tip cleaner below the stem. This stove is in Bob Fladung’s collection.

This Coleman Model 140 three burner Bungalow Cooker is an early stove model made from 1923 through August, 1927. Joe Pagan restored this stove in his collection. Not all the grates came with the stove. The 5″ center burner is identical to that of a Handy Gas Plant, as is the generator & fuel control.

Air-O-Gas Model 326 is a pre-1928 model. Note the two different grates on this model – on “open type” on the left and “no burn type” on the right. Joe Pagan restored this stove to working condition. Joe notes that the left grate is nearly identical to the center grate on the Bungalow Cooker above. 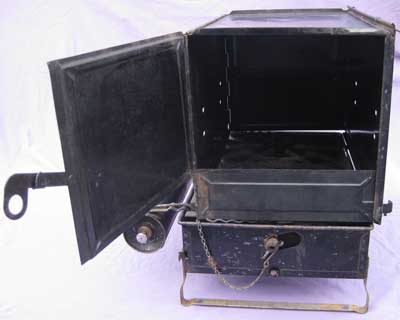 Model 2C was only shipped in 1927 according to Strong’s Shipping Records (Becker); only 1424 were shipped. The auxiliary burner control is a push-pull strap (not visible); it exits the case under the main generator valve. Model 9D (down this page), also made in 1927, lacked the oven. This stove, in Christopher Durbin’s collection, is missing the corrugated oven rack and diffuser plate (lower image).

This is a Model 2D stove manufactured by Coleman in 1928-29; all original including the box. The Coleman name is stenciled on the tank in gold. The tank rests in two positions, one to heat the generator and the second to operate (seen here). This stove is in Fred Kuntz’s collection. 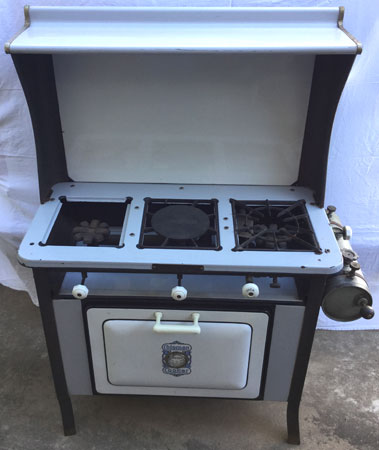 Called Model 362 Coleman Cooker, this stove includes a high back, three stove top burners (the grate is removed from one), and an oven with thermostat (lower image).
This early kitchen stove appears in the Shipping Records from 1928 to 1932, when the Model number changes to 912 (Stendahl). This stove is in Bill Whitten’s collection.

Coleman made Model 9C in 1927-28. Ron Lenfield was given this stove as a young boy. He has repainted the main compartment and still uses it. This stove featured a change in the burner openings as seen in the lower image.

Joe Pagan restored this Model 9D stove, successor to Model 9C above. The stove runs very well with a blue flame from each burner (not shown). Joe gave the stove back to his boyhood friend, Tim French; the stove had belonged to Tim’s father. 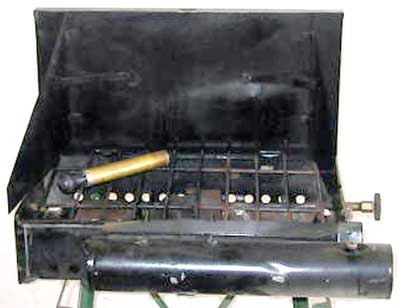 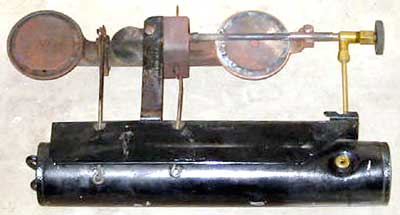 Paperwork with Coleman’s Model 10 stove, also called the Gypsy, dates it to Sept. 1927. The lower image shows the tank and burner assembly. The push-pull regulator rod on the left controls the flow of fuel to the second (left) burner, while the generating shift lever (another push-pull rod) near the middle allows for putting fuel in the preheating cup just to the left of the right burner. This stove is in Ron Lenfield’s collection.

This urn burner is made with a Coleman burner and other parts so the appliance may have been made by Coleman as well. However, Dick Sellers, whose collection this is in,
has not seen any paper documentation for this model but notes that in the 1920’s Coleman shipped thousands of urn burners. The CQ fount is so identified but is undated. 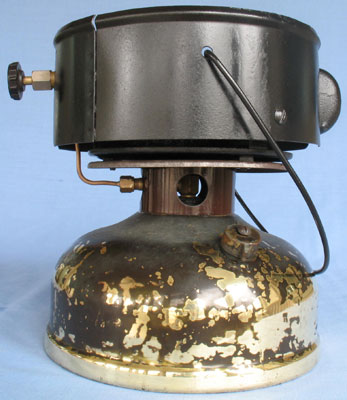 Model 454 is an instant lighting Utility Burner that is similar to the 456 Soldering Furnace, and dates to the late 1920’s – early 1930’s. This utility burner is in John Rugotzke’s collection. The fount is the same as on a CQ lamp. The utility burner is finished in brown Colac paint; the collar has the original brown paint. The upper parts of the utility burner were painted with high temperature black paint. 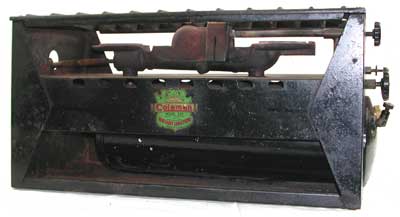 The Coleman Model 373 stove is unusual in that the tank is below the burners. The tank on this model is pressurized with an external pump; the pump nipple can be seen on the right side. This two burner stove dates to around 1930 and is in Jon Schedler’s collection.

The No. 10 Folding High Stand sold for $1.90 in the early 1930’s. This 25″ tall, all steel accessory had “all folding joints” that “lock automatically and make a rigid high stand.” Alex Swanson, whose collection this is in, believes the stand color, in this case black, matched the stoves being sold at that time. No. 10 stove stands also are found painted brown and green.

Coleman in Wichita continued to make Model 9 in the early 1930’s. This 9E, in Jim MacDougall’s collection, is instant lighting. The fuel valve wheel is tilted upwards in the end of the tank because the fuel air assembly is straight so it reaches the bottom of the tank.

Model 914 was made in the early 1930s. This stove, in Richard Gustin’s collection, measures 49 1/2″ H x 49″ W x 24 1/2″ D. It features instant lighting for the four cook top burners, oven and broiler. There is a service drawer for utensils below the cook top burner controls. The Everdur tank (left image) has an integral pump, safety lock fuel control, large filler plug and combination fuel and air gauge.

One of the earliest cabin stoves was this Model 376 made from January, 1933 and later. This stove, in John Bell’s collection, cites an instant lighting patent, 1,718,473, on the tag on the bottom middle front of the stove. This model requires a separate pump. 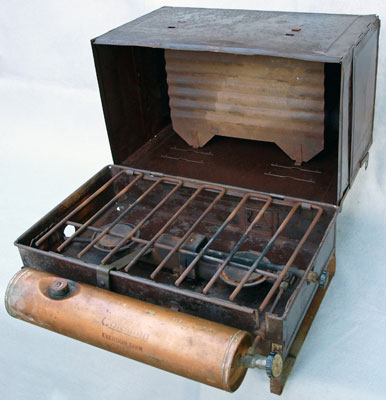 Coleman made the Model 2F stove, here in John Stendahl’s collection, in 1934. Model 2F differs from 2E in having an Everdur tank. John believes that Coleman also added a plug (white arrow, lower image) to drain fuel if the user didn’t shut off the main valve at the fuel tank causing fuel to escape from the generator tip of this instant lighting stove when only the generator valve is shut off. 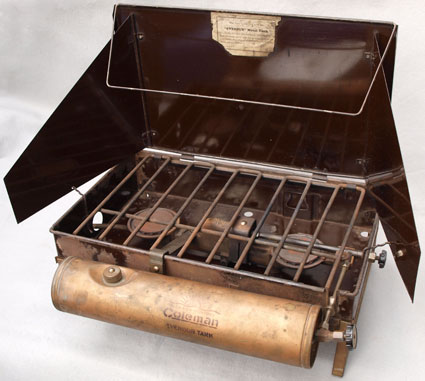 Coleman also made this companion 9F stove to Model 2F above in 1934. It has the same features, except the integral oven, as on Model 2F above. This stove is in John Stendahl’s collection.

Coleman’s Model 2G stove dates to circa 1935. It includes a bronze lacquered Everdur tank and Band-A-Blu burners. The pump handle has a locking pin; the left valve wheel slides out of the case for turning. This stove is in James “Smitty” Smith’s collection. 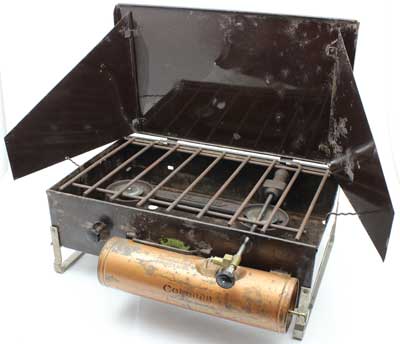 Model 9 continued to be the ovenless version of Model 2 above. This Model 9G, in Alex Swanson’s collection, has the same features as Model 2G above except for lacking the oven. The lower image shows the locking pin on the pump handle that was a feature of this pair of models. 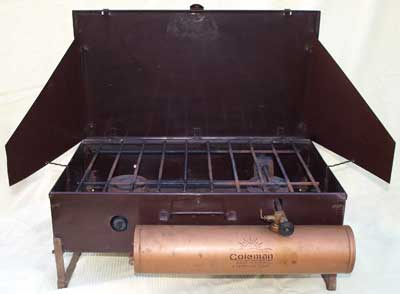 Coleman made their Model 3F stove in the early to mid 1930’s. This unlabeled two burner stove, in John Stendahl’s collection, was identified by James MacDougall who noted that the longer case (22″) with 3 hinges fits the Model 3F stove. The valve wheel for the left burner can be retracted inside the case when not in use. The stove has an Everdur tank.