This Model 51 kerosene lantern was manufactured by Hugo Schneider Aktiengesellschaft, HASAG brand, for Provincial Incandescent Fittings Co., PIFCO brand, in Manchester, England, possibly their Model 1405. It appears in PIFCO catalogs in the mid to late 1920s (McRae). The pump has a bracket to hold down the handle (upper images). The PIFCO stamp (lower image) was used on some of their appliances. This single mantle lantern, in Neil McRae’s collection, was rated at 400 cp. 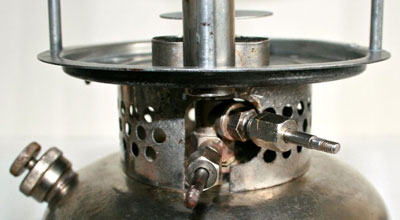 This lantern is marked HASAG, No. 102, Made in Germany. The lantern may have been made under license from National Stamping & Elec. Works, (Nulite brand) Chicago, USA. The flat ring around the mantle does not pass fuel but may help heat this kerosene lantern when it is running. The upper valve (lower image) is for the tip cleaner; it and the lower fuel valve are missing their wheels. This lantern is in Tony Press’ collection.

Hugo Schneider Aktiengesellschaft or MEWA (see below) made this Kerolux Model 103 lantern for an importer in Buenos Aires, Argentina. This lantern, in Juan Caiti’s collection, appears to be a 500 cp model. 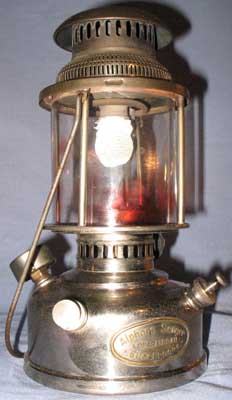 The only markings on this Hasag Liliput 100 cp kerosene lantern is the badge on the fount: Alphons Senger, Apparatebau, Düsseldorf. This lantern is in Bernhard Müller’s collection.

This Model 22 Hasag Liliput is stamped Für Spiritus (alcohol). The other side of the fount has a blue and yellow Hasag decal. It is a 100 cp model (Neil McRae). This lantern is in Bernhard Müller’s collection.

The Hasag Model 34 is a 100 cp kerosene lantern. From its good condition, Neil McRae, whose collection this is in, assumes it is post WWII. If so it was made by MEWA in East Germany. The tip cleaner needle in this one is broken which prevents its operation. 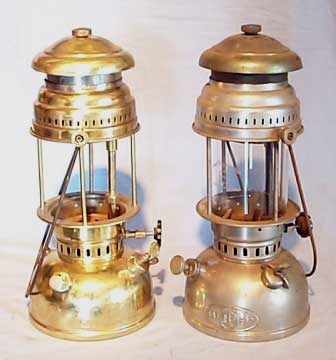 The Hasag Model 42 lantern on the left, in Henry Plews’ collection, and Bat Model 42 on the right, in Neil McRae’s collection, were made by Hugo Schneider Aktiengesellschaft and MEWA respectively. Neil notes the puzzle here that the Bat is post 1949 and the Hasag is identical but the Hasag brand was supposed to have died in 1945. Neil suspects that MEWA, an East German company, used the Hasag brand as well as the MEWA brand during the 50’s. 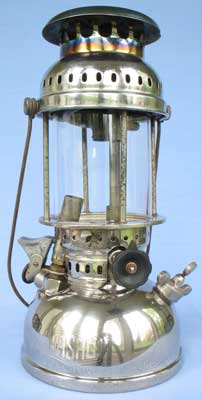 This Hasag Model 142 Presto lantern is the same as the Model 42 lanterns above except that it has the rapid preheater. This 200 cp kerosene lantern, in Ralph Trask’s collection, has the model badge on the top rim of the frame base plate, as is typical of appliances by this manufacturer.

This Hasag Model 51OA is badged on the fount and the underside of the reflector
for Alphons Senger, Apparatebau, Dusseldorf (Germany). The lantern is in Karl Göbel’s collection. Compare to Model 51A below.

Hasag Model 51A was manufactured as early as the late 1920’s. Frederik Tivemark dates this lantern in his collection to 1937-38 using catalogues. The A designation is for alcohol preheating. The lantern was rated at 270 cp. The globe was made by MEWA with a lighting hole and marked Raso Therm.

This Hasag Model 351L may have been made in 1944, according to Frederick Tivemark, whose collection this is in. The frame base plate is electroplated, not nickel plated. The valve wheel is fiber, not Bakelite, and the globe is marked 44 (1944?). One enameled badge on the frame identifies it as model 351L, and the other identifies it as Hasag – Leipzig.

MEWA (Metall Waren Kombinat), Leipzig, Germany made these Model 351L lanterns after WWII. Tobias Jesse repainted the lantern on the left to the original color; it has a glass globe with a hole to light the preheater. Frederik Tivemark’s lantern on the right includes the original Jena Therm globe.

Neil McRae took the picture of this unknown lantern in Henry Plews’ collection. It is marked “882 Made in Germany” on a brass plate riveted to the support collar. Petromax made a Model 882 table lamp. Hasag made other lanterns with blue enamel so it may be a post WWII lantern made by MEWA. Please email me if you have further information.

Standard-Licht-Gesellschaft m.b. H., began as a German company located in Frankfurt am Main, and in Switzerland, probably Zurich (Leger). All Standard-Licht lanterns are presented below.

This 200 cp Model 5022 Standard lantern was manufactured by Standard-Licht-Gesellschaft m.b. H., Frankfurt am Main, Germany. Neil McRae modified the burner with a 250 cp gas tip and opened the air gap a little to get it running as seen here.

Standard-Licht also made this Model 5032, 150cp kerosene fueled lantern This model, in Bernhard Müller’s collection, is preheated with alcohol. 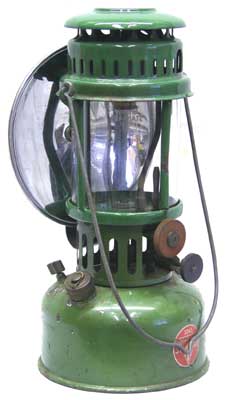 Standard-Licht possibly made this Model 2045F lantern in the 1930’s. It is 200-300cp but the reflector makes it 2000 reflected cp. The steel fount lantern is unusual in being able to use gasoline as it has a positive needle valve shut-off and the check valve is on the shoulder of the fount (left in the images). The lantern has a smaller flame preheater just below a bend in the generator. This lantern, in Neil McRae’s collection, is similar in design to Petromax Model 850.

Model 2046S is the same as Model 2045F above except that it has a non-war production nickel plated brass fount and a built-in tip cleaner. The lower image shows the fuel valve (left), preheater valve, and tip cleaner valve (right). This lantern is in Clemens Oetjens’ collection.

This Standard-Licht Model 2422 is a kerosene version of Model 2045 above, according to Neil McRae who also notes that this model lacks a second control wheel and has a preheater cup. This lantern, in Ruedi Fischer’s collection, has a green enamel collar, frame, and vent; the fount is green painted steel.

This Standard-Licht Model 4500 is Swiss made and gasoline fueled. McRae notes this model is 300 cp. The lever on the left is for the rapid blow preheater that appears as a tube opening along the generator. This lantern is in Ruedi Fischer’s collection. 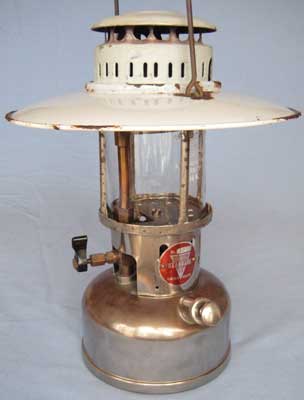 This Standard-Licht Model 4522 is also Swiss made but is kerosene fueled. Bo Keller found this lantern in Vietnam with the gray enamel shade. Both the lantern and shade are marked Standard and Swiss Made. The Jenaer Suprax globe is marked Made in Vietnam.

This Standard-Licht lantern is unmarked as to model. The lantern, in Ruedi Fischer’s collection, has a gasoline preheater, vertical tip cleaner lever on the right, and a gray enamel ventilator.

This 300 cp floodlight is badged Phare Koppel, a French company in Moselle, but was made by Standard-Licht as their Model 3116 (McRae). This lantern, in James Harvey’s collection, has a small preheater that appears just below and right of the mantle; the preheater lever is behind the fuel valve (left image). A manometer to measure fount pressure is mounted on the shoulder of the fount. A tip cleaner lever is behind the preheater lever and is not visible in these images.

Two more Standard Models, 5122H (left) and 6112H (right). Neil McRae was able to run the 5122H by using a 250cp Petromax generator Neil got the 350cp 6112H lantern from Thailand. The label seen on the base rest appears to have the importer’s name in three languages: Chinese, Hindi, & Thai. 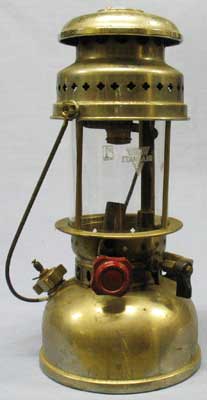 Standard Momento Models 6022 (left) and 6122 (right) are 250 cp kerosene lanterns. Model 6022, in Ruedi Fischer’s collection, appears in a 1940 catalog (Neil McRae). Model 6122 dates to the 1950’s and is in Jürgen Breidenstein’s collection. Both have rapid preheaters hence Momento in the model designation, and both have manometers. 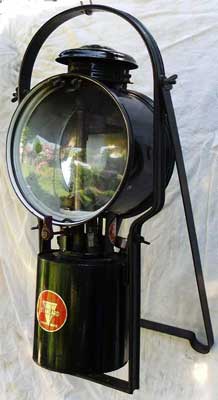 Standard-Licht-Gesellschaft made this Model 3516M floodlight in Switzerland circa 1954.
The lower image (left to right) shows the valve assembly, rapid preheater, and manometer. This kerosene fueled floodlight is in Rolf Hübener’s collection. 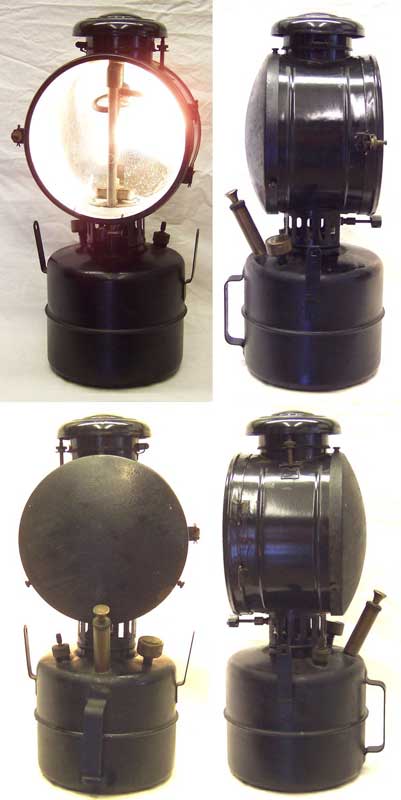 Standard-Licht-Gesellschaft m.b. H. also made this floodlight which Neil McRae, whose collection this is in, believes to be Model 3517M. This is a gasoline fueled model based on the lock down needle valve on the pump. The fount holds 2 liters of fuel.