James Hinks & Sons, Birmingham, England, made this Model 1410 bracket lamp, except for the burner casting, which is by the Thomas Manufacturing Co., Dayton, Ohio, USA. The pump has been fitted from a Tilley as the lamp came with the pump missing. The device at the bottom of the fount is an alcohol dropper bottle for preheating. Neil McRae was able to run this lamp on a 50-50 mixture of kerosene and gasoline, per the manufacturers’ recommendation in an advertisement for their products. James Hinks & Sons later became part of Falk Stadelman, located in London, England.

Model 1411 table lamp by James Hinks & Sons also runs on the same 50-50 mixture of kerosene and gasoline (right) as the above bracket lamp. The lamp appears in information from approximately 1928-29 supplied by Jeff Johnson to Neil McRae, whose collection this is in. The preheater torch (center) fits vertically in a well in the side of the fount (left & right images) when it is not in use.

The valve wheel on this unknown lamp model is marked HINKS, BIRMINGHAM. The integral pump on the left includes a pressure release screw. This model also has a built-in alcohol dropper bottle for preheating (left image, right side) as on the Hinks lamps above. The lamp would have been held on a wall in a circular bracket (missing). This lamp is in Neil McRae’s collection.

Jakob Hirschhorn AG, Berlin, made this AIDA Bonares indoor hanging lamp. This alcohol lamp, in Rolf Hübener’s collection, appears in a 1911 book on German lighting. The 90 cp lamp is 43 cm high and will operate for 10 hours on a filling.

The model number of this AIDA donut lamp is unknown but the patented Preston coil generator (mounted on a slant – right) dates it to 1924-28. This lamp is in Rolf Hübener’s collection.

Jakob Hirschhorn AG, Berlin, also made this AIDA Model 213 table lamp that is in Rolf Hübener’s collection. The Preston coil generator on this 200/250 cp (McRae) kerosene fueled lamp is preheated with an alcohol cup (just above the valve wheel).

J. M. & D. Hunter, Birmingham, England, primarily made Nulite products, presumably under license from that US company, but also created their own burners, including this Type 2 burner for their appliances, including this 1H lamp, for a brief time, circa 1923. You can see more burner detail on a Hunter lantern here. This lamp is in Neil McRae’s collection.

These Apex brand lamps were manufactured in South Africa, most probably by Johannesburg Metal Pressings. This nominally 400 cp double mantle kerosene lamp, Model 400?, may date to the 1950’s. The model is unusual in having an open-top ventilator. These lamps are in Alan Ford’s collection (left) and Neil McRae’s collection (right).

These two lamps, in Albert White’s collection in Australia, have similar parts to a Kerona heater in Dane Gernecke’s collection in New Zealand. One of these lamps is only stamped with two Australian patents, while the other lamp is stamped Kerona. Neil McRae notes that this is the earliest known use of the Preston burner and generator. Trade magazine notes show that the Kerona brand in Australia was made by Malcolm Preston & Co., Sydney, by at least 1915 (Mills) and advertised by Early Bros. Ltd, Wellington, New Zealand, by 1925 and later (McRae).

Conny Carlsson found this lamp in France. It is much like the Kerona lamp above, but is stamped Talisman on the fount, a brand name owned and used by Maurice Juchat, Paris, according to company paper obtained by Conny. It also has two German patents stamped by the Preston generator. The conical top, shade, mica globe, and pump are not original to the lamp. 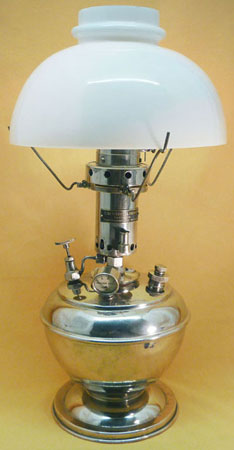 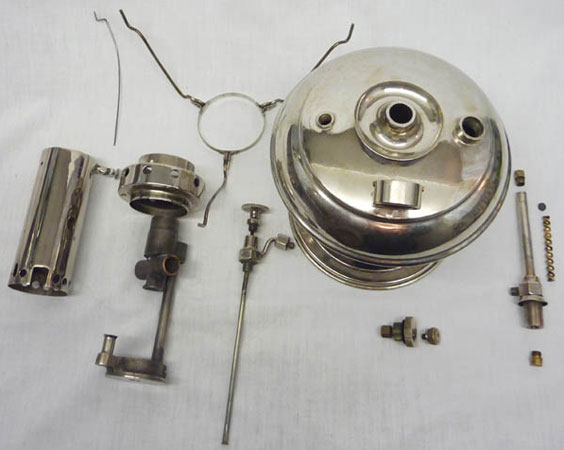 This lamp was most likely made by the Kitson Empire Lighting Co. Ltd, Stamford, England, based on patents filed by that company with features of this model. The lamp may date to around 1908-12 based on the design and use of the Empire Light name (McRae). The lamp includes a vertically placed torch lighting generator (middle image – right). The kerosene fueled lamp has an alcohol preheater cup built into the top of the fount. The lamp, in Conny Carlsson’s collection, requires a separate pump.

Kitson Model KD 1 is likely an earlier model than the Kitson lamp above. It was made circa 1920, according to Kenny Connolly, whose collection this is in. Neil McRae notes that this lamp is a 100 to 200 cp kerosene model.

Kitson Model KD 2 is much the same as Model KD 1 above but is a kerosene wall lamp mounted on a steel ring. This lamp, in James Harvey’s collection, is missing the burner cover. The badge on the tank of this lamp (middle image) identifies the manufacturer as The Kitson Empire Lighting Co., Ltd., Stamford, England.

The Kitson Empire Lighting Co., Stamford, England, also made this Model KD4 donut lamp. Neil McRae, whose collection this is in, believes it dates to around WWI. Seen here running in the right image, it is a 300cp model in Neil’s opinion. The lamp is missing the top cover for the burner and the shut off valve wheel in the right image. Similar models of this lamp have four arms rather than two.

Kitson also made this unknown model table lamp. The air tube in the burner image (right) has a ring of 12 small holes around the bulbous base connection to the handle that allows air to enter the lamp. This lamp is in Jeff Johnson’s collection. 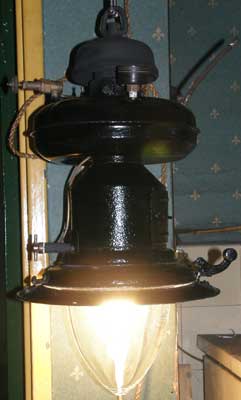 Kitson also made Model A, a 600 cp kerosene outdoor donut lamp. This steel lamp, in Neil McRae’s collection, is seen here in a composite image (left and center) and running (right). Kitson also made a 300 cp and a 1200 cp model in this series of outdoor lamps.

The Kayen table lamp, Model HL7, burned kerosene and was rated at 300 cp. Kayen pressure lamps were made in Sydney and Melbourne by W. Kopsen & Co. and T.S. Nettlefold & Sons Pty Ltd. respectively between 1945 and circa 1955. They were finished mainly in lacquered polished brass. The globe in the image on the left, in Jim Dick’s collection, is not original. The lamp on the right, in Neil McRae’s collection, has a shade that is most likely old Tilley stock that was used by Kopsen on their lamps in the late 40’s. 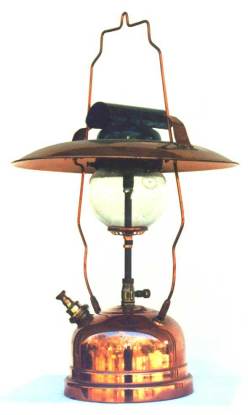 This is a Kayen Model AP2, an all-purpose hanging lamp (reflector on), table lamp (wire hanger and reflector off), or lantern (reflector off). This 300 cp kerosene model is in Jim Dick’s collection. The AP2 was very popular in Australia from the mid 1940’s to the mid ’50’s. Jim has polished the uncommon copper fount for show purposes. Usually the founts were brass, polished, and clear lacquered.

Gebrüder Lauterbach, Berlin, Germany, made this Marla brand gravity fed alcohol lamp which was first advertised in 1910. This lamp, in Walter van Gulik’s collection, includes a tool (left) that he believes was used for cleaning the vapouriser.

This Model 211 lamp (McRae) was made by G. Lefebvre et Cie., Paris. The embossed fount is a feature of this model. The lamp is gasoline fueled. The manometer is marked with the company name. This lamp is in James Harvey’s collection.

Société Métallurgique Liotard Frères, Paris, made this Lilor brand Model 1988 lamp in the mid 1920’s. Conny Carlsson, whose collection this lamp is in, made the shade holder and found a reproduction shade with a hole in the top so the lamp would run as designed. This 300 cp lamp runs on gasoline. 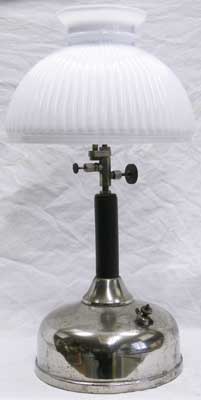 The Provincial Incandescent Fittings Co. Ltd., Manchester, England, sold this Model 987 PIFCO brand lamp. The lamp was likely made for them by the Société Métallurgique Liotard Frères (McRae). Compare this lamp’s burner to Model 1988 above. Neil McRae, whose collection this is in, has found this lamp in PIFCO catalogs from the mid to late 1920’s. He notes that the match lighting lamp has an early built-in tip cleaner operated by the small wheel on the left (lower image, right).  Note the P (for PIFCO) in the valve wheel (lower image, left) that was used to identify some of their appliances. This gasoline fueled lamp was rated at 350 cp; the shade is a reproduction of the original.

This Lilor Model 1935 is convertible from a desk model (running, lower right) to a wall lamp (upper image) by means of a ball and socket joint at the top of the handle (lower left). Conny Carlsson, whose collection this is in, dates the lamp to circa 1930. The lamp originally had a cloth shade That may have been protected from burning by the glass “tulip” shade seen here.

This Lilor Model 1931 is also both a desk and wall lamp as Model 1935 above. It also originally had a cloth shade over the glass shade. Models 1931 and 1935 appear in 1925 and 1929 Lilor catalogs This lamp is also in Conny Carlsson’s collection.

Another Lilor brand light, this Model 4083 donut lamp appears in their catalogs from 1920 until the early 1930’s. This 150 cp gasoline fueled lamp, in Conny Carlsson’s collection, was rated at 150 cp and has a single mantle.

This lamp is stamped Lumiere Noel, a company located in Paris, France. This lamp doesn’t appear in their single known catalog from 1921. Conny Carlsson restored the lamp which is in his collection. He notes that it has features associated with an outdoor lamp.