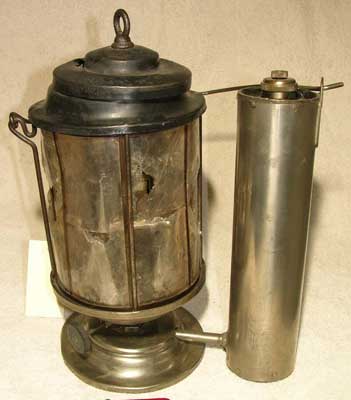 The Akron Lamp Co, Akron, Ohio, made this torch lighting lantern circa 1915. This model doesn’t appear in any catalogs or company literature but has a burner that is the same as on their model 90 below. The bail is attached to left side of the frame and the right side of the fount. This lantern is in the collection at Mammoth Cave National Park, Kentucky.

This Akron Model 90 lantern appears in their No. 18 catalog circa 1916. A torch lighting model, the lantern has a thick generator tube that requires preheating for a minute or so
with the flames from an alcohol soaked torch. Note the screen at the bottom of the air tube (lower image). This lantern is in Conny Carlsson’s collection. 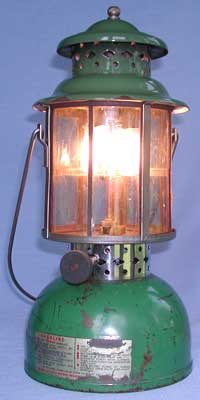 The Akron Lamp Co. made their Model 103 lantern in several different styles. The first style ( upper left – in Craig Seabrook’s collection), lacked the later diamond shaped holes in the globe rest and ventilator. Later styles have the diamond shaped holes in the collar (top center- in Bob Fladung’s collection) or in the collar and ventilator (upper right, in Robert Shelton’s collection, and lower). The lantern on the lower right is in Scott Martin’s collection. Model 103 lanterns require a separate pump, have an “S-shaped” generator, and are match lighting.

Akron made two versions of their Model 107: with a built-on pump (left), in Joe Pagan’s collection, and a pump built into the fount (not visible; right), in Bo Ryman’s collection. The diamond cut-outs in the globe base are a symbol of Akron’s Diamond brand. As Model 103 above these were match-lighting with the “S-shaped” generator; and were available as gasoline or kerosene fueled lanterns. 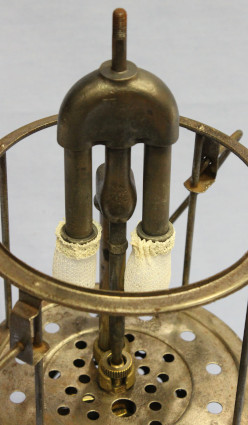 The ventilator and fount were chrome plated on Akron’s Model 131 lantern. This model, as Models 131 and 132 below, had the Instant Glo burner system (right image) that included a tip cleaner (left image – handle below the frame base plate) and dates to the 1930s. Note the flat brackets on the opposite frame uprights to which the bail ends are attached (right image). This lantern is in John Rugotzke’s collection. 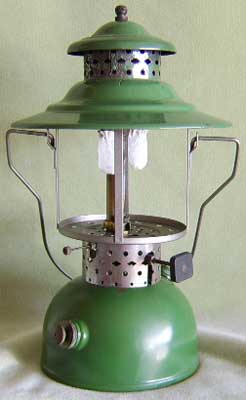 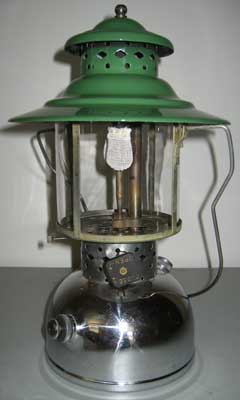 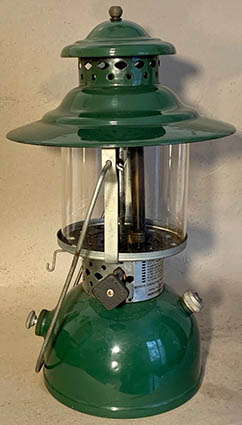 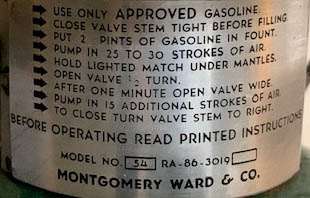 Akron also made Model 132AG (above) for the retailer, Montgomery Ward. The Montgomery Ward model number for the lantern was 54 RA-86-3019 (lower image). This lantern appears in a 1935 catalog where is retailed for $4.98 (McRae). The mixing chamber  casting on this lantern and the 132 Models above is the same as on Model 131 above. This lantern is in Agostino Del Coro’s collection.

The Akron Lamp & Mfg. Co. made this Model 132-S-42 which was converted to burn leaded gasoline with an Aladdin Conversion kit dated 1944. The burner assembly kit was made by the Delta Electric Co, Marion, Indiana. This lantern, in Craig Seabrook’s collection, has a Combat Servicable decal stating that it has repaired/refitted by QM (QuarterMaster) depot and returned to service.

Akron Model 133 is the same as Model 107 above except for the Instant-Glo fuel valve and generator, comparable to instant lighting in Coleman lanterns. This model probably was first made in the early 1930’s; Joe Pagan restored this lantern in his collection. The tip cleaner handle has a “hook and eye” in the middle so it hangs down when not in use (left side of the collar), >unlike the other Instant-Glo models above. 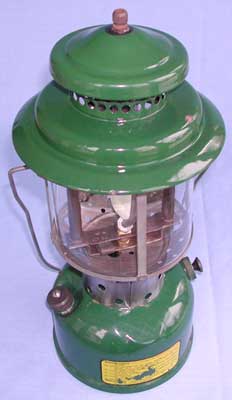 Akron Lamp & Mfg. Co. was one of the contractors that produced the military specification lantern during WWII. This one is also stamped U.S. and 1944 on the fount base. The Aladdin conversion burner is also date stamped 1944 by Servel, Inc. The upper fount is shaped for a parts well (right image) but was not stamped out.

Akron also marketed the above lantern as R 301 under its Radiant brand and badged Radiant Products Inc. This lantern, in Dan MacPherson’s collection, has the same features as Model 301-G above The globe, which appears to be original is heavy glass, unmarked, and with the top and bottom surfaces ground flat.

Akron made these lanterns, stamped 60-8846 in ink on the bottom, possibly for Montgomery Ward (Neil McRae). This 200 cp model has a reproduction mica globe and takes a separate pump (left) and the original mica globe with a built-in pump (right). These lanterns are similar to Akron Model 302-G, which had a built-in pump, but may have been made as shown here exclusively for Montgomery Ward. The lanterns are in Dan MacPherson’s collection (left) and John Anderson’s collection (right). The bail is missing from the lantern on the right; the frames are offset on the collars 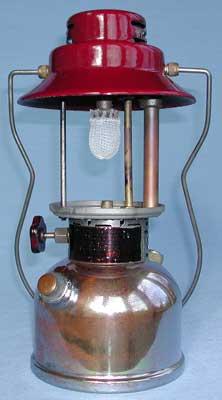 The label on this lantern identifies it as Model 400G by the Akron Lamp & Mfg. Co. and company literature notes its introduction in 1941. While the fuel filler cap is an Akron style, the generator and valve knob are AGM designs, and the bail slides into two bolts that fasten the ventilator – a unique design. The globe is an early Coleman with green lettering. This lantern is in Dan MacPherson’s collection. 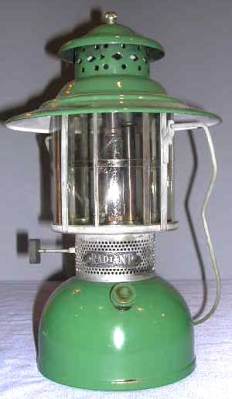 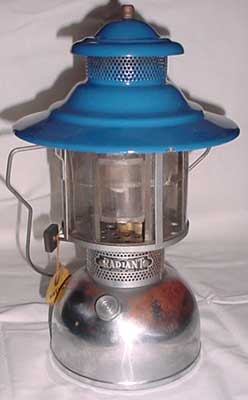 These Model R-132 lanterns were made by Radiant Products, Inc., Akron, OH. The Akron Lamp Co. used the brand name Radiant from the 1930’s and changed from Diamond to Radiant after WWII and went out of business in 1948. Both lanterns are original and share the same model number. The lantern on the left is in David Jahn’s collection; the lantern on the right is in John Bell’s collection.