Coleman appliances made in countries other than the US and Canada are included in the Coleman Canada pages on the website.

This PQ lamp was made not long after the Toronto factory opened in 1921 based on the single Canadian patent stamping on the air tube (lower image). Later appliances are also stamped with the British patent dated Feb 2-1922. These patents were for the match lighting burner. This chandelier lamp, in George Rocen’s collection, includes an escutcheon to hide the hanging bolt.

This Coleman Canada Model CQ is undated and is only identified on the fiber handle (lower image). Roland Chevalier found the bell and handle height are 6″; the bell is taller than the ones that follow. We believe this one was made in the early 1920’s.

This Coleman CQ is undated and stamped on the fiber handle as the CQ above, but is also embossed on the bottom of the fount (right image). Roland Chevalier believes this version of the CQ was made after the CQ lamp above. The bell and handle height are 5 5/8″. 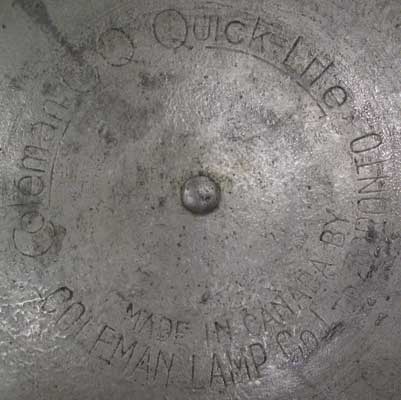 Later CQ lamps, such as this one that was made in May 1926 (lower image), were also stamped on the fiber handle as the CQ above, and stamped, not embossed, on the bottom (above right). The bell and handle on this version vary in height from 5 1/8 to 5 3/8″. This lamp is also in Roland Chevalier’s collection.

This CQ differs from the one above by having a fount painted black with gold accents. The lamp is dated May 1927. Agostino Del Coro fitted it with a 324 Coleman shade.

Coleman – Toronto also made Model HQ pendant lamps This lamp, in Doug Dwyer’s collection, is seen without the 329 shade. The lamp can be moved in the hanger “eye” to be level with the shade attached. The Canadian version can be distinguished by the valve wheel & patents on the air tube. You can see the Coleman – Wichita version here.

Coleman Canada made these Everbright lamps for a company by that name in Toronto. The lamp in the left and center images is in Jerry Engbring’s collection, while the lamp on the right is in Dwayne Hanson’s collection. The shades are original; the burner assemblies and fount bottom stampings are identical. The Canadian department store chain Eatons advertised this model in 1926 – 1929 (Vantiger). 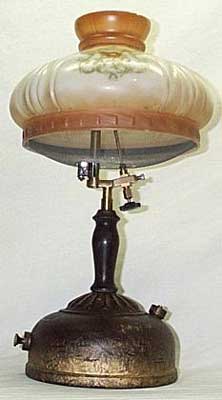 Coleman Toronto made Model 118 in Oct. 1928 This lamp, in George Rocen’s collection, has the #324 shade and #903 bug screen. The paint, not used in the US, is a dark brown Colac finish with gold accents.

This Model C331 has two features that are unique among Canadian Quick-Lite models – a turned wood handle and a fluted fount. The US version of this model also had an integral pump, whereas the Canadian version required a separate pump. Coleman – Toronto described the finish as “Brushed silver with ebony highlights.” Model C331 was sold with a 329 white Monax shade as seen here. This lamp, date stamped May, 1929, is in Roland Chevalier’s collection.

This Canadian Coleman is the Silver Duchess. It was originally sold with a parchment shade. It was model 118B in the US but seems to have been model 118 in Canada. It is also similar to Model 154, shown in a 1935 Canada parts catalogue, but that model lacks the integral pump which this one has. This one, in Neil McRae’s collection, is dated September, 1934.

Canadian Coleman lamps, Model 153 (left) dated Sept. 1934 and Model 154 (right) dated Aug. 1938. These models lack the integral pump and have the valve at the base of the handle. The Model 153 lamp is graced with a #318 Coleman glass shade and is in George Rocen’s collection. The Model 154 lamp is in Craig Seabrook’s collection.

Coleman in Toronto, Canada, sold a steel base/vase to hold 242 series lanterns and called it a No. 121 Duo-Lite lamp. This Duo-Lite lamp is in Jim & Jan Nichols’ collection. The 242 lantern in the base was made in Wichita and is dated February, 1935. The lantern sits on three tabs that are fastened halfway down inside the base. The Coleman plastic shade is No. 152SD (left image). The shade holder screw in the ventilator (right image) holds the lamp shade. A brass finial fits over the shade holder screw in the left image.

The Toronto factory referred to this nickel plated large fount Model 143A lamp as the “Duchess Lamp” in their 1938 catalog. This two mantle, instant lighting lamp requires a separate pump. It takes a 14″ parchment shade and inner mica globe. The model was made from the mid- to late-1930s. This lamp, in Agostino Del Coro’s collection, is date stamped April, 1937.

A CQ stamped lamp on the bottom, the decal on the side of this Canadian lamp identifies it as Kerosene Mantle Lamp. This lamp, in Bernie Rousseau’s collection, is date stamped May 1937. Neil McRae has determined that this is Model 169K based on the listings in a Canadian Coleman Catalog from 1936.

Coleman in Canada finished these Model 128 lamps, named the “Princess,” in either Coppertone (128C) or Silvertone (128S). This 300 cp model was match generating and required an external pump. It would run on either kerosene (on the right with the alcohol cup) or white gas (left). The lamp on the left is dated Sept., 1934 and is in Bob Meyer’s collection. The lamp on the right is dated April, 1938 and is in George Rocen’s collection.

When Coleman protected parchment shades with the 355 globes, as on the lamps above, a screen to protect the mantles from flying insects was desirable. George Rocen found this insect screen in Regina, Saskatchewan. It may have been made by an aftermarket supplier.

Coleman – Toronto made this kerosene burning chandelier lamp, Model 103K, in August, 1938. Roland Chevalier, whose collection this is in, reproduced the original parchment shades. The central hanger rod is 24″ high (top not shown) and includes a hook for hanging from a ceiling. 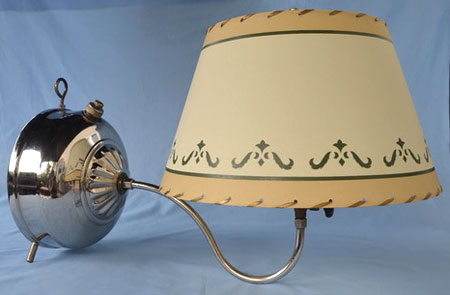 Another kerosene burning lamp, this 102K wall lamp is date stamped September, 1938. Like Model 103K above, this lamp requires a separate pump. The lamp, in Gary Bromm’s collection, has a reproduction shade by Roland Chevalier.

Model 329BC, the “Empress,” was made from the early 1930s until the early 1940s. While the model has an embossed fount, it is a match lighting or Quick-Lite lamp and requires a separate pump. By the time this lamp was made in September 1939, a parchment shade with a mica liner globe was available for the lamp. This lamp, in Agostino Del Coro’s collection, is finished in Coppertone Ivory and has the 11 1/2″ long hanger rod screwed into the mixing chamber casting that allowed the lamp to be hung on a hook from the ceiling (right image).

Model 169K requires a separate pump and had a parchment shade with an inner globe. This Canadian model, dated Nov 1941,  was a large fount alternative to the 168K below; both use kerosene. Both of these models have a mixing chamber that contains an inner metal sleeve (lower image). It reduces the diameter of the tube which alters the gas/air mix so that a gasoline generator such as an R55 can work with kerosene (McRae). 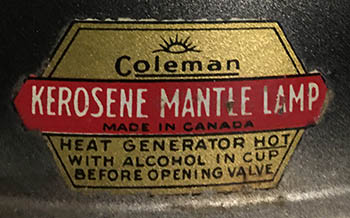 Coleman – Toronto made these Model 168K lamps, named the “Regal,” in June 1937 (upper left and lower), December 1942 (upper center), & May 1946 (upper right). This kerosene model requires an external pump. The lamp on the upper left, in the late David Jahn’s collection, is an earlier version painted black with gold accents. The decal (lower image) only identifies this lamp as a Kerosene Mantle Lamp. Later colors were green with silver highlights. The fount on the lamp in the center is steel due to a shortage of brass during WWII. The mica globe and parchment shade on the lamp on the right, in Doug Dwyer’s collection, appear to be original.

Coleman made these Model 156 “Empress” lamps that are date stamped April 1947, left, in the late George Rocen’s collection, and February 1949, right, in Herman Mulder’s collection. Unlike Model 157 below, this match lighting economy model requires a separate pump. The one on the left has the pressed, two-piece brass mixing chamber as on Model 157 below. Coleman-Toronto also used a differently shaped wood handle (left image) occasionally on the early 15X series lamps.

Coleman – Toronto made this Model 157X “Sunshine” lamp date stamped Feb. 1948. Like Model 157, this X version was finished in ivory with gold highlights and had a built-in pump. The X version differed in having the option to run on kerosene in addition to gasoline; note the kerosene preheater cup. It also has the inner metal sleeve as in Model 169K above. After WWII Coleman made a number of lamps and lanterns with mixing chamber castings from two pieces of pressed brass as on this lamp (right image). This lamp is in Sean McGee’s collection.

Kerosene Model 158 was named the “Royal”. This lamp, in Doug Downs collection, is dated April 1948. The 355 globe would protect an optional “Sheer-Lite” shade; The fount and handle are painted with silvertone green baked enamel.

Another Model 158 lamp as above, this lamp, in Agostino Del Coro’s collection, is date stamped 2 48 and includes an optional “Sheer-Lite” shade from this time period.

This 158 Model lamp, in Tony Press’ collection, has the same differently shaped wood handle as on Model 156, left, above. The lamp is date stamped February 1947.

These Coleman Canada Model 159Xs are dated Dec. 1955 (left) and June 1969 (right). The X designation is for the red painted brass restrictor on the base of the air tube. With the restrictor in place the lamp burns gasoline well and, if removed, it runs well on kerosene (John Eggert). The lamp on the left is in Ed Dennis’ collection. The lamp on the right, in George Rocen’s collection, may have been made near the end of lamp making by Coleman in Canada. The lamp is unfired and came with the 159X-3382 globe holder and 330 globe.

This 159K lamp was made in February ’71, several years after the above 159X lamps. This lamp, in James “Smitty” Smith’s collection, was built with a 6″ lantern fount, rather than lamp fount. The lamp has an ink stamp on the bottom identifying it as Model 159 but the box these lamps came in identify it as Model 159K. The lamp was sold without the shade. The inner 660 globe and hanger (left image) are original to the lamp.