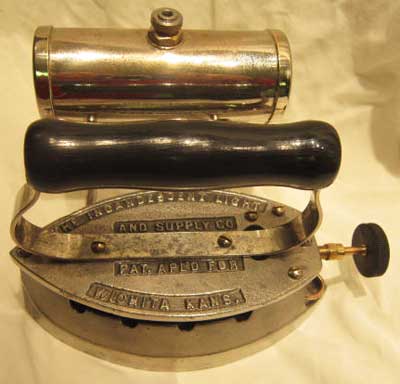 This iron is marked for the Incandescent Light & Supply Co., Wichita, that was later consolidated with the Coleman Lamp Co. This model was manufactured for Incandescent Light & Supply by the American Gas Machine Co. (AGM), Albert Lea, Minnesota. The iron (here Patent Applied For) was issued patent 1,043,421 on Nov. 5, 1912 to Hans C. Hanson, President of AGM. This iron is in Jan Dyke’s collection.

Coleman sold their No 1 iron for a short period in the mid 1920’s. This model was made for them by the Monitor Sad Iron Co., Big Prairie, Ohio. You can see this same Monitor iron badged for the Thomas Mfg. Co. here. The “key” wrench controlled the fuel flow. Jason Tyler bought this iron near his home in Australia.

Roland Chevalier was preheating his Coleman Canada Model No. 2 iron with alcohol when he took this image. The alcohol preheats the valve at the back of the iron and the lid extension allows the top plate to lean against the tank to preheat that part as well. This iron came with the wrench, funnel, and instructions. The trivet is from a different iron. 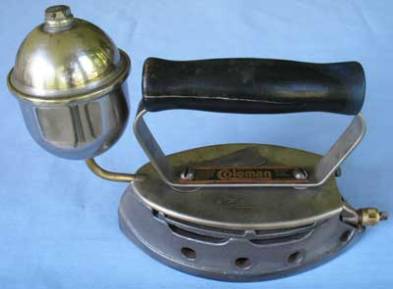 The Coleman Wichita Model No. 2 iron was manufactured in the mid 1920’s. The lid extension is folded back during operation in the left image and the iron is running in the right image. This model was replaced by the No. 3 iron, that was the first of the Instant-Lite series.

Coleman’s Model 3 iron was manufactured in 1927. James Davis found this iron, as seen here, in his father’s effects after he passed away. The box label has the family’s address where they lived until the mid 1930’s. Jim has had this iron operating. 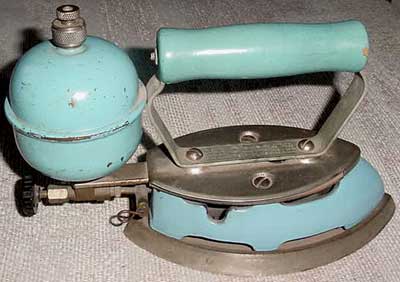 Coleman’s Model 4-A iron was very popular with it’s “Cool BLUE Handle.” Coleman in Wichita, Kansas made this model from 1929 – 1948. This iron belongs to Clarence Landrum; it was purchased in 1939-40 in rural Oklahoma.

This Coleman Model 5 iron has a green enameled sides. This torch-lighting model, in Ron Lenfield’s collection, dates from 1929-33. 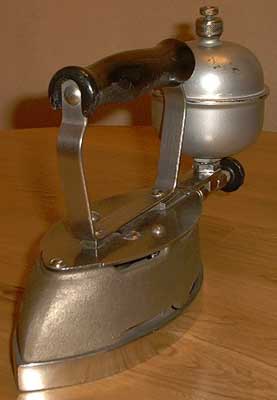 While the valve wheel and other parts on this iron appear to be Coleman the only markings are “Instant ” Paperwork with another of these irons shows that it was sold by Sears as No. 5946 and possibly made in 1935 based on what may be a date code on that paper. 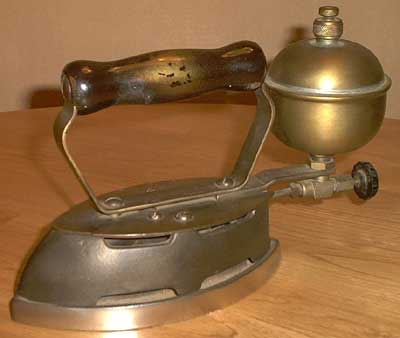 Coleman Canada’s version of the Model 8 iron features a gold painted tank and gold band on the black wood handle. This iron, Don Colston’s collection, appears to have been used very little. 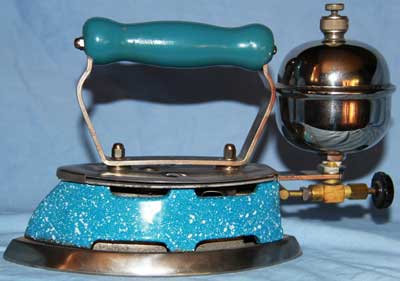 This Coleman iron is stamped Made in Australia by arrangement with Coleman Lamp & Stove Co., Ltd, Canada. It also has a Jan. 14, 1936 Trademark date. This iron appears in Australian catalogs until at least 1955. This instant lighting iron is in Joey Sparks’ collection.

Coleman in Wichita made the Model 609 iron in 1938-1940. This instant lighting “Streamlined” model featured a natural grip Bakelite handle with a built-in thumb rest. The tank has a counter sunk filler plug. This iron is in Joey Sparks’ collection. 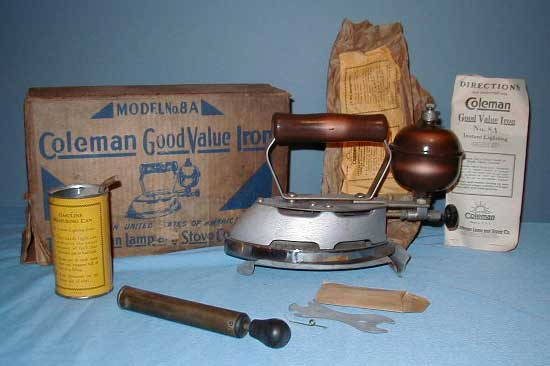 This is Coleman’s Model 8A, the Good Value iron. It was manufactured in September, 1939. I found this mint condition iron with “all the bits” – box, wrapping paper (in Spanish), instructions, pump, filler can, wrench, and extra parts. 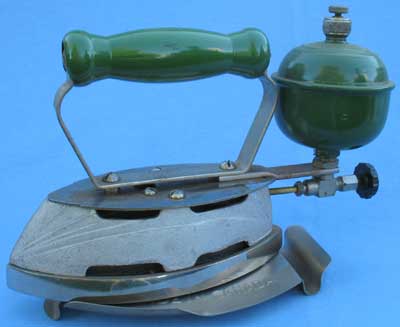 Coleman – Canada made the Magic No. 10 iron. This instant lighting model features the fluted body that is seen in only a couple of other models. The instruction sheet for this model has a printer’s date of April 1937 (Rocen). This never-fired iron is in Bernie Rousseau’s collection. 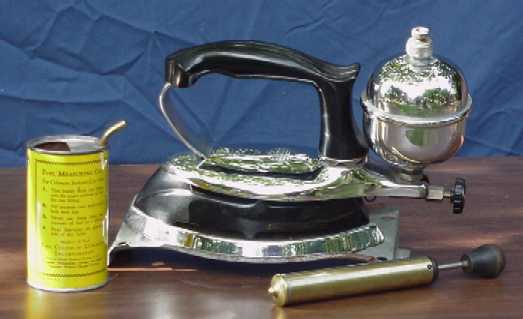 This Coleman 609A iron is shown with the original pump and filler can. This iron is in Dwayne Hanson’s collection. It was manufactured in 1938-1941.

Coleman Canada listed the 4-A iron in ivory and red colors as well as blue in a 1942 catalog. The iron retailed for $6.95 in that year and came with a stand, pump, wrench, and measuring can. This instant lighting iron is in Joey Sparks’ collection. 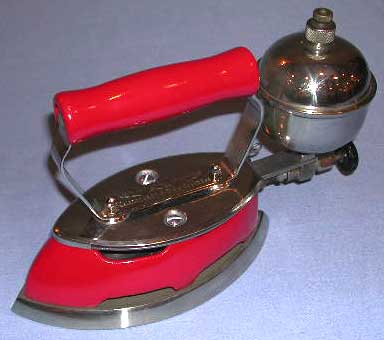 This is a Canadian Coleman iron, Model 4-A, which was manufactured in this beautiful red color. This iron is in Don Colston’s collection.

Coleman Canada also made Model 4-A with a black enamel body and black painted handle. This iron, in Tom Muscardin’s collection, came with the trivet, tools, and spare parts. The iron has a common problem – the user burned the wood handle!

This iron is stamped Coleman Model No. 11 Kerosene, Pat. Appl’d For. George Rocen, whose collection this is in, notes that it appears to be identical to Model 611 below.

This Canadian Coleman iron is Model 611, a kerosene model circa 1947. Note the clean-out lever built into the fuel valve which distinguishes it from the more common 611A which lacked this feature. This iron, in Don Colston’s collection, came with the original pump, burner cleaner, and instructions. 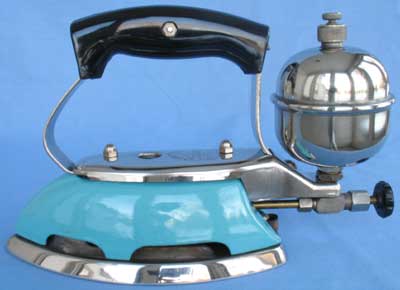 Canadian Coleman Model 611A differs from Model 611 above by not having the clean-out lever built into the fuel valve. The two lower images show the iron running from the side (left) and rear (right). In the side image you can see the flames directed to the sole of the iron and in the rear image you can see the flames directed down on the generator. This model first shows up in catalogs in the late 1940’s. This iron is in Roland Chevalier’s collection. 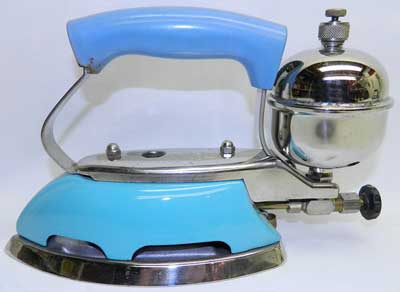 This 611A Canadian iron is the same as the 611A iron above except that it has a blue wooden handle instead of the usual black plastic handle. George Rocen, whose collection this is in, believes this handle is original to the iron. 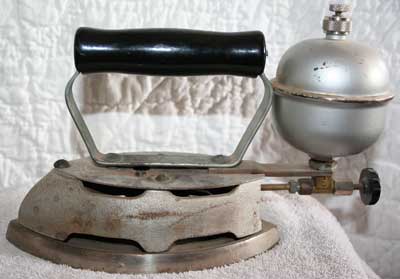 Model 12, a Good Value Instant-Lighting Iron, appears in a Coleman Wichita Jobber’s Catalog in 1948 and is listed for two more years with parts available in a 1958 parts catalog. It cost $1.50 – $3.00 less than Model 4A. This iron is in Joey Sparks’ collection. 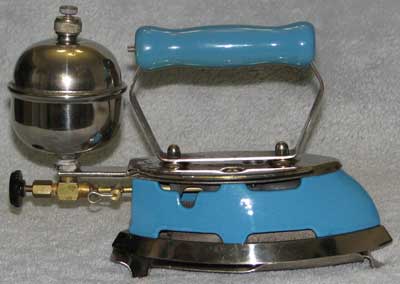 Coleman Canada may have made this 4-A iron in the early 50’s based on the color and style of the instruction sheet that came with it. For years Coleman Canada referred to the 4-A iron as the Aristocrat in its brochures. (Rocen) The iron, in Doug Downs collection, came with the box and accessories.

Coleman Canada probably made this Model 4-C iron after 1952. The body of the iron is stamped steel that was enameled. This Instant Lite iron is in Roland Chevalier’s collection. The top plate has a rounded lip all the way around, not just on the nose as Model 4-A, and lacks slots around the top of the enameled sides, that made it prone to overheating (Engbring).

Coleman Toronto also made a Model 12 iron but later than Coleman Wichita (see above). This iron, in Ron Becker’s collection, is stamped Model 12 Instant Light, Good Value Iron, Coleman Lamp and Stove Co. LTD Canada. The only differences that Ron can see between this iron and the US version are the screw heads used to attach the handle to the body of the iron and the lack of company stamping on the tank of the Canadian version. The instruction sheet that came with this iron is dated 4-60 (George Rocen). 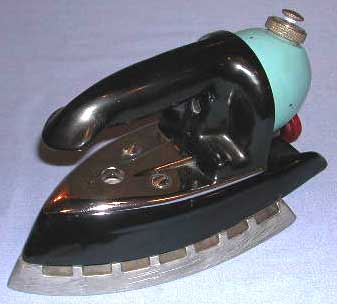 This Model 615A, date stamped January 1975, is in Don Colston’s collection. This model was made until at least February 1982 (Engbring). The sole plate is aluminum; the iron is fueled with kerosene. An instruction sheet that came with this model has directions in English, French, Spanish, Sotho, Zulu, and Afrikaans. Model 602A from this period differed in having an iron sole plate.

Coleman Canada also continued making their 4 series irons at least until January 1983 (lower image) when this unfired 4-E iron was made. This instant lighting iron is in Ron Becker’s collection.