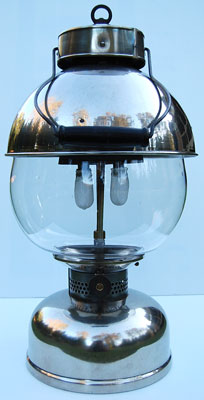 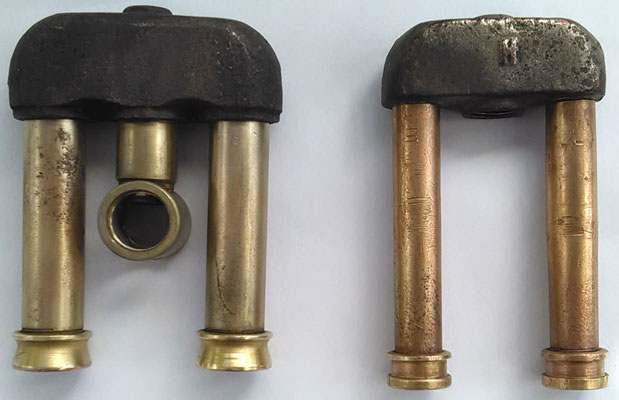 Coleman made hundreds of Arc lantern Model H 416 from 1922 – 1925 (Strong – Shipping Records). Only the burner assembly parts were different from Model 316 on this page, from the generator to the burner caps and larger, round air tubes (lower image, left) Model H 416 took larger mantles and was rated at 800 candlepower (Diehl). This lantern was restored by Steve Retherford for Mike Coon, whose collection this is in.

Coleman also made these LZ327 (left) and LZ427 (right) lanterns, known here by their Coleman numbers, for several retailers including Sears and Montgomery Ward. These lanterns have a separate post to support the burner; the air tube, which is curved in these models, opens below the mantles. The mica globes were removed for the images. The lantern on the left is in Doug Dwyer’s collection. The lantern on the right lacks its generator and is in Don Colston’s collection.

There is no documented evidence that Coleman made a chandelier with lantern heads, however, this chandelier, in Brad Stephenson’s collection, has no evidence of solder in the lower portions of the fuel valve assemblies where a fuel uptake tube from the fount would have been fastened and there are no bail attachment marks on the frame posts.
The embossed ventilators date it to 1922 or later.

Coleman Shipping Records note several hundred BLQ appliances shipped in 1924-25. In that period Coleman was still using 7″ diameter founts, as on this lantern, for bracket models in Coleman literature of the period (Vantiger). The valve wheel stamping and burner details are consistent with this lamp being made in 1924-25. Other features including the rim tabbed unmarked ventilator and a soldered hex bolt in the fount bottom suggest they were using these parts from old inventory. This wall lantern is in Mel Taylor’s collection. 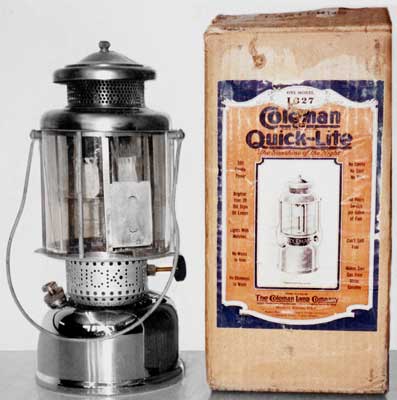 The Coleman Quick-Lite 327 was sold from 1920 to 1924 from the Wichita (USA) plant with no date stamp. This lantern, in Ron Lenfield’s collection, includes the box and accessories. Although this lantern has a later style baffle plate, the usual baffle plate in this version is as in the lower image.

These two Quick-Lite lanterns are unusual because the pump is only partially mounted in the fount. The check valve can be seen between the pump and filler cap. Air from the pump is piped up to the top of the fount. Shipping records show several hundred were sent from July – December, 1924 (Becker). They were the first Coleman model to have a pump as part of the lantern. These lanterns are in Shirley Willard’s (left)& Dean DeGroff’s (right) collections. 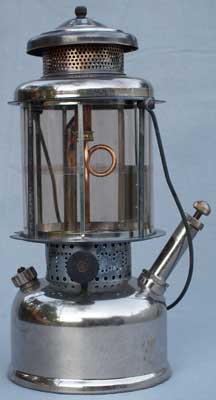 The first pumps on Quick-Lite lanterns were “built-on” rather than “built into” the founts.
This L427 lantern, in John Stendahl’s collection, is date stamped May, 1925, and has the pump top with the rounded handle. Other L427 pump handles have a nearly flat top or a top with rounded lobes. 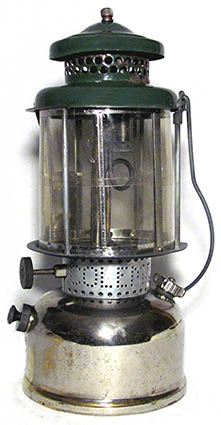 Beginning in May, 1927, Coleman changed the design of the integral pump from built-on (above) to built-in, as on this lantern in Ron Becker’s collection. L427s built after this date all have the built-in pump.

Coleman made this model for their Sunshine Safety company (post 1923). It has many of the same parts as Quick-Lite Model L327. The collar, generator, and cap nut are different from that model. The center globe cage base disk is stamped Sunshine Safety Lamp Co., Kansas City, MO. This lantern is in Dwayne Hanson’s collection.

Model E20, the Quick-Lite Jumbo Gas Lantern, with a built-on pump (left), and the Quick-Lite Poultry House Lantern, without a pump (right),both featured a 1 gallon fuel tank. Steel wool and a coil of asbestos “rope” inside the globe rest kept dust from clogging the air intake and fuel from dripping on the floor. These lanterns are in Jerry Engbring’s collection.

This L427 was tagged and has a decal by the California Dep’t of Motor Vehicles. Michael Hawks, whose collection this is in, was surprised that the numbers on the tag and sticker were different. This lantern is date stamped 7 9 = September, 1927. There are other examples of Coleman lantern models badged or marked for other Federal and state agencies on the next page and later. 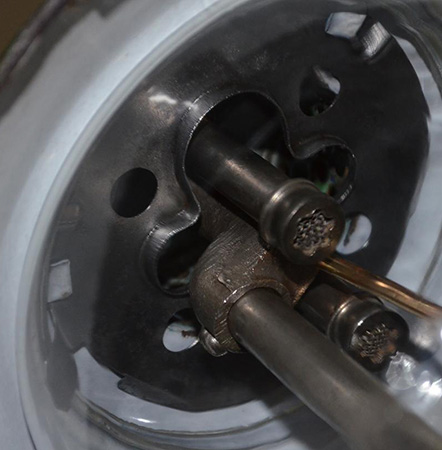 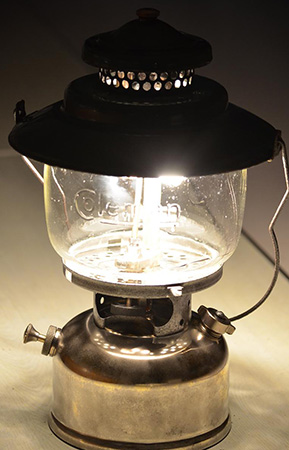 This lantern is date stamped 7 9 (September ’27), six months before the L220/L228 lanterns were introduced. It appears to be an early version of those first instant lighting models with the same burner and T88 generator. The globe is embossed Coleman and Pyrex Reg US Pat Off Made in U.S.A. on the back (not shown). The globe is stabilized in the frame by an upper plate (middle image) and lower spring clips (upper right image). Takao Kimura, whose collection this is in, and I believe this is Model 216, one of three lanterns noted in the Coleman Shipping Records a couple of months after the 7 9 date. 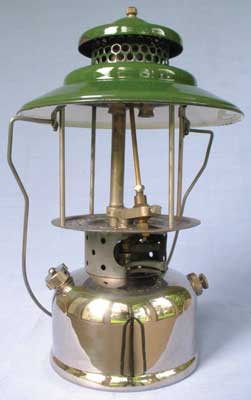 The first production of instant lighting lanterns was in March, 1928 when Coleman made the L220 and L228 (above- missing mica globe). 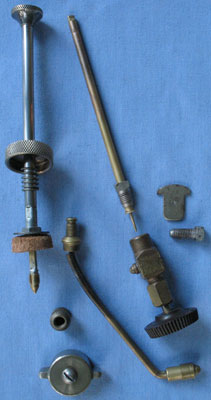 Coleman made the L220 (above) and L228 (below) for a short time in 1928. The L220 above, dated Aug. ’28, is running with the original T88 generator. To accommodate the pump, which is mounted into the center of the fount, the fuel pickup tube had to swivel for removal (below the 2nd set of threads). Note the air tube along the left side of the fuel pickup tube, which is necessary for the Instant Lite feature.

For the first few months of production the fuel air feed tube, Part No. 217-148 (left and above), was supplied with the L220/L228 lanterns. Note the air enters at the top of the tube just below the fitting that is seated in the inlet bushing in the top of the fount.  After several months Coleman switched to Part No. 117-148 (right). The air tube surrounds the fuel tube. Air enters at the top where the outer tube is beveled. Both designs have a fine screen inside or around the barrel at the bottom to capture particles in the fuel and prevent clogging but the one on the right has more surface area. These parts are in Dean DeGroff’s collection.

Coleman lantern Models 220 (left) and the earlier L228 (right). The Model 220 has the slant Q77 generators and is dated July 1929, while the L228 has the T-88 generator and is dated Oct. 1928. We think the different style of the valve knobs indicates the type of generator. These lanterns are in Craig Seabrook’s collection. The original globes in these lanterns were mica. 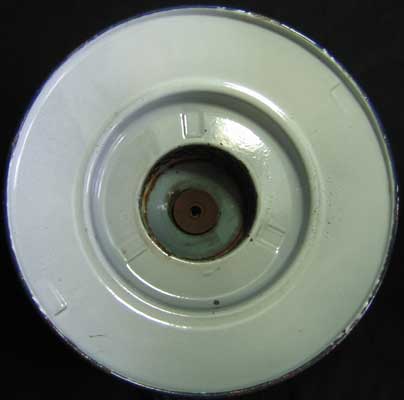 Model L227 is a Quick-Lite model with a wide ventilator. This version, in Dwayne Hanson’s collection, is the most well known with a flat capture nut to hold the ventilator and several indentations in the ventilator (right). This lantern is dated Dec. 1927. 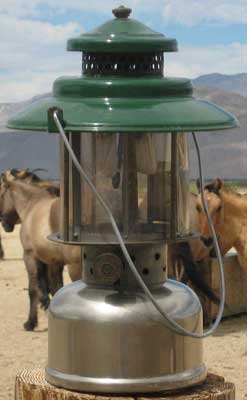 Coleman Shipping Records and catalogs date this Model MF125 and Model MF143 that follows, to 1931-35. Model MF125 lacked a built-in pump. The baffle plate in this lantern is stamped Sunshine Safety Lamp Co. This lantern is in Dick Seller’s collection. Images of the ventilator for this lantern are below. 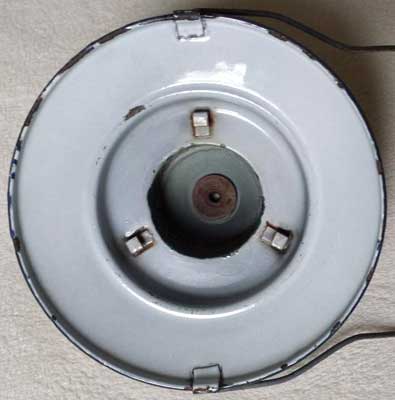 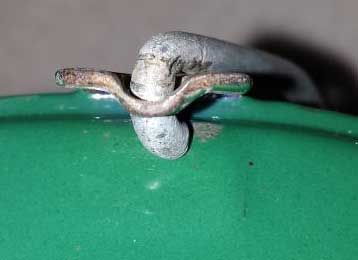 The brackets in the middle portion of the ventilator center the mica globe (image above). The detents in the bail tabs (image below) hold the bail upright. Model 227 preceding (right image) has flat spaces in the ventilator where these brackets and bail tabs were not used. This ventilator is from an MF-125 in Russ Baldwin’s collection. 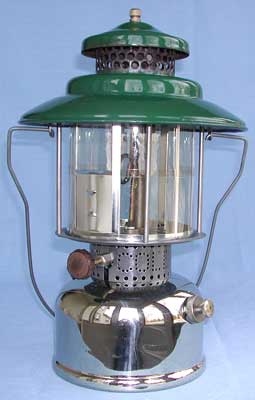 The ball nut on this version of Model L227, dated stamped Feb. 1929, is separate from the vent and the ventilator lacks indentations as above. Coleman shipped Model L227 from Aug. 1927 through Dec. 1932 (Strong cited by Becker). The mica globe is a reproduction by Fred Kuntz.

In 1927 Coleman advertised an accessory ventilator, No. 216-490, to convert an L327 or 427 to an L227 with a retail price of $2.10. The advertisement says: “This makes the Lantern a most desirable light for use in hen houses, work shops, barns and feed lots, or any place where concentrated light is desired. Especially good for night fishing.” This lantern is in Dick Sellers’ collection.

Coleman’s first production of Models 220B and 228B was May, 1930. Until early 1934 all of the founts of these two models were stamped 220B on the bottom. These models could be purchased with either a Pyrex (left) or mica globe (right). Details of the early construction of these models is shown below. These lanterns are in Paul Elgin’s collection.

The construction of the above 228B built in May 1930 includes a swaged bail that will only fit in the key slot on the frame member when it is under the frame. As a result the bail will not detach from an assembled lantern. 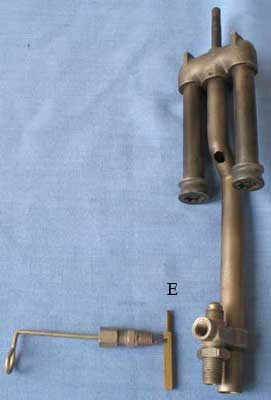 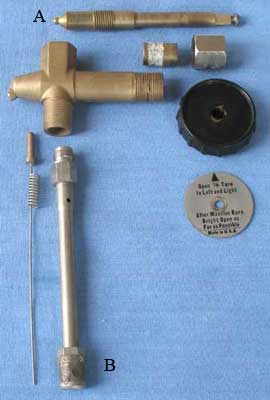