The badge on the fount of this Coleman lantern identifies it as a 286 Original Edition, (Serial) No 0973. The model number on the collar is 286A700T; the instructions there are in English, French, and Spanish. This lantern, in Michael Merz’s collection, is dated April 2001. Note the unusual metal globe. 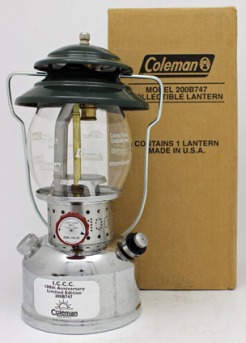 Model 200B747 was a Limited Edition lantern for members of the International Coleman Collectors Club on the 100th anniversary of the company. 100 YR COLEMAN is spelled in holes in the collar. There are a variety of Coleman logos on the globe (upper left image). By the time of the manufacture of this lantern, the burner (upper right image) is composed primarily of pressed steel parts. The valve body continues to be offset from the central axis of the lantern which reduces the amount of brass needed to make this part (lower image). This lantern, in Tim Treutler’s collection, is date stamped Aug. 2001.

Model 295 continued to change cosmetically compared to earlier versions above. This 295-700T, dated Feb. ‘2002, is finished in dark green, lacks the Powerhouse Dual Fuel fount decal, and came with the green plastic case, which is dated 2001. This lantern is in John Kemmis’ collection. 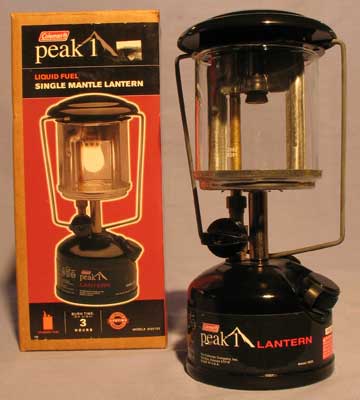 Coleman made this Peak 1 Model 3022 lantern with little change from the earlier 222-226-229 series that was first made in the early 1980’s by Coleman – Toronto, then by Coleman – Wichita. This lantern, in Clayton Heiderich’s collection, is date stamped November 2002.

Coleman in Wichita made this Model 290 lantern for the Canadian military, Matthew Reid believes, as it came from a Canadian Air Force Base and has the M prefix in the model number. It appears to be the same as other model 290 lanterns (see above) except for the plain Coleman parallelogram label on the fount. It is date stamped Sept. 2003.

Coleman has produced several different versions of gold or silver plated lanterns using models that were in production at the time. These lanterns were used as gifts or for recognition purposes. This engraved Model 288, in Dan Boschen’s collection, is date stamped Dec. 2004. 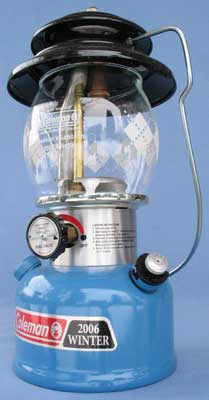 Model 285A was manufactured by Coleman to run on Coleman fuel, unleaded gasoline, or E-10 gasohol (10% ethanol). The label to the right of the Coleman logos says Select E Fuel under an ear of corn. Matthew Reid, whose collection this is in, finds that only the generator has a 285A prefix in the parts list. This lantern is dated April, 2006.

The Heritage Lantern, Model 3000000101, included a limited release to International Coleman Collectors Club members who attended the 2007 convention. This lantern, No. 0190, is date stamped Oct. 2007 and is in Tim Treutler’s collection. The ten digit model number was part of a Coleman transition in their computerized inventory. The lantern is much the same as Model 200B higher on this page but they only refer to it as a single mantle model on the box besides using the 10 digit model number.

Model 286B has a couple of obvious changes from Model 286A: 1. the pump has a plastic cap that requires a special tool to remove. 2. While the mixing chamber lacks the “trough” around the outside to help stabilize the ventilator (right image) as on the 286A it still stabilizes the ventilator. This unfired lantern, dated May 2011, is in Greg Rubin’s collection.

Coleman made the Model 200B 2017 Limited Edition Seasons lantern available to the North American market. This lantern, date stamped August, 2017, is in Jeremy Hall’s collection.