Prentiss-Wabers Products Co. made this Model 2 Auto KampKook Kit when the town they were located in was known as Grand Rapids, Wisconsin, which dates the stove to between Oct. 21, 1919 & Aug. 4, 1920 (Joe Pagan). Note the stove tank is fastened to the case. The legs are removable on this early model (middle image). This stove came in a steel carry case with utensils and flatware (top image), some of which seem to be original. Gene Childers has restored this stove which is in his collection.

This early version of the No. 4 stove dates to around 1920.The tag on the stove identifies the company location as Grand Rapids, Wisconsin, as on Model No. 2 above. The tank is half-round and fits closely to the left side of the case. Note the valve wheels vs. a key to regulate the burner as on the No. 4 stove lower on this page. Jim MacDougall used a filler cap from a newer Preway stove when he took these images.

Prentiss Wabers Model 3 Auto KampKook Kit came in a carrying case (upper image) that had places for eating utensils in the lid. Joe Pagan, whose collection this is in, dates it to 1922-24. Note the removable key to operate the valves. 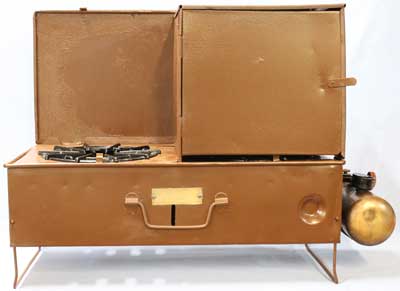 This later version of the Model 3 stove includes an integral oven over the master burner. The burners and tank store inside the stove case as on the later two burner Model 4 below. James “smitty” Smith repainted the stove case to preserve it from further rusting. 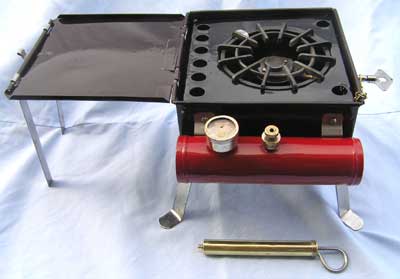 This Prentiss-Wabers Model 4 Auto Kamp Kook Kit is the one burner equivalent of the two burner model above and was made from 1922-24. This stove, in Joe Pagan’s collection, has a removable key to control the burner. The steel parts of the burner make preheating difficult. Preway used the Model 4 designation later for a two burner model (see below). 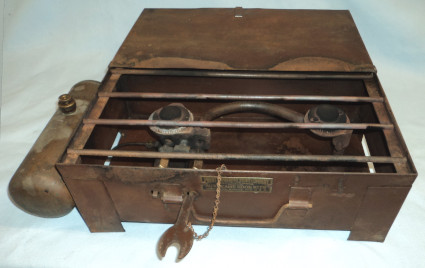 1923 advertisement for this Preway Kamp Kook Special No. 6 two burner stove notes that it has the same burners as Models 2 and 3 above.  The burners are controlled by a “skate key” combined with a wrench (upper image). The top of the case slides forward when the stove is not in use. When it is in use the top is supported in back by a clip that also functions to hold the top closed (lower image). Joe Pagan, whose collection this is in, cleaned the stove and case leaving the original patina. This economy model has no pressure gauge or windscreen. 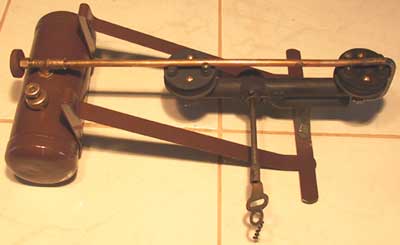 In 1925 Preway introduced the two burner Model 4. Joe Pagan believes the above stove, in Rodney Redondo’s collection, is this first version of the Model 4, as it has the tank mounted on the left and the “skate key” to control the second burner. Rodney restored the stove including repainting. The preheater cup is missing but the stove can be run.

A later version of Preway’s Model 4 Auto-Cook-Kit still required preheating but the preheater cup was changed from the first version above. Glenn Knapke restored this stove including repainting the case. By lifting Rod A (lower image) and opening the valve,
fuel is diverted to the preheater cup. Rod B passes through the slot in the case to control the left burner.

Preway’s Model 1 Auto-Cook-Kit has 3 burners but is comparable in burner design
and control to the preceding Model 4. This stove, in Don Ostby’s collection, dates to around 1926-’27, based on the tank placement on the right side (Pagan).

Prentiss-Wabers made this Master Chef stove for Sears circa 1926-27 (Pagan). It differs from Model 5 (not shown) in having a sheet metal top around the 8″ burners rather than a grate and the tank is mounted on the right side of the case rather than the left. The warming rack across the top is a feature on both models. This stove is not instant lighting and requires a separate pump. Bill Flecher restored this stove which is in his collection.

Prentiss-Wabers Products Co., Wisconsin Rapids, Wisconsin, manufactured many stoves in the first half of the 20th century. This Model 8B two burner stove was advertised in 1931 (Pagan). The burner assembly stores in the case by lifting it from the running position (upper image). The stove is instant lighting; it has a sliding bar with a hole to allow the fuel air mix to reach the left burner (lower image).

Prentiss Wabers also made this Handy Chef Auto-Camp Stove for Sears, Roebuck and Co. This restored stove, that was in the late Glenn Knapke’s collection, differs from the one above by not being instant lighting, so it has a preheater cup below the left burner. The stove is unusual in having the second burner closer to the tank, rather than farther from the tank, and with the generator passing over both burners.

The burner on this Auto-Kook-Kit No. 9 is much the same as on Model 4 above for preheating and operating the second burner but the burner assembly is longer and the stove has a cast iron grate. This case on this stove, in Mike Morgan’s collection, is 20 1/2″ x 11″ x 5″; 4″ longer & 2″ wider than Model 4 above. The stove was likely manufactured in the late 1920’s (Pagan).

This Prentiss Wabers 3-burner Model 22PW is instant lighting and probably dates to pre-1934 as noted for Model 168 below. Joe Pagan restored this stove which features a metal strip across the top front panel of the stove that can be raised to the left to insert/remove the tank and burner assembly.

Prentiss Wabers made this Model 18P stove for the Coleman Lamp and Stove Co. distributor in Los Angeles, California. The stove is similar to Preway Model 108 which dates to 1933 (Joe Pagan) but unlike Model 108 this stove is not instant lighting and lacks a “clip” that attaches the stove to the front of the stove case (see Model 209 below). The stove tank features a sunshine logo and the word COLEMAN (middle and top images). This stove is in David Ternes’ collection. 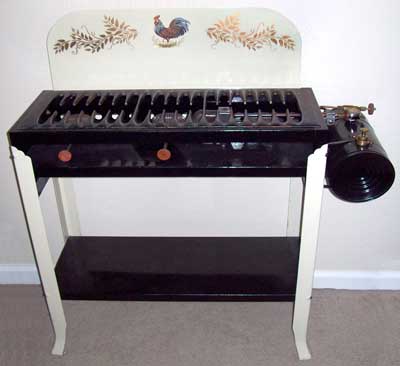 Preway Model 168 is a 3 burner floor stove that was advertised in 1933 (Pagan). Randall Adams restored this stove which included fabricating the splash guard and tailoring the design of that part for their kitchen decor. 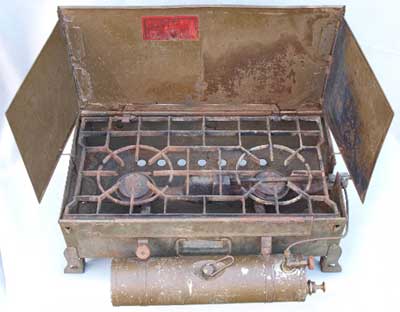 In 1934, this 205 Preway stove was the economy model although it had an integral pump and instant lighting as did the other camp stove models this year. This stove, in John Stendahl’s collection, has less expensive features including a lighter design, smaller size, wire grate, and a painted 2 pint tank.

Sears advertised this Kookrite one-burner Preway stove in a 1934 catalog for $2.89. This model includes an integral pump and is instant lighting. The mixing chamber casting is the same design as on Model 418 below. This stove is in John Jordan’s collection.

Preway Model 312 dates to around 1935. This 3-burner Auto Cook Kit, in Dave McFarlan’s collection, is instant lighting; the valve wheel at the end of the generator controls the fuel flow while the other valve wheel at right angles to the first controls the preheating fuel-air mix. 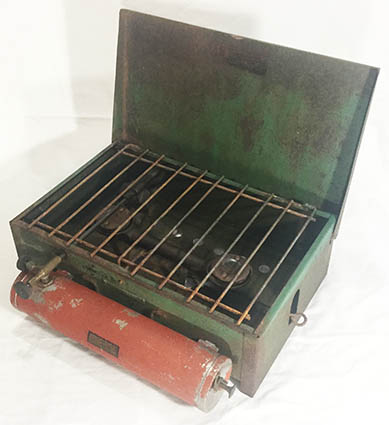 This Preway stove has a Model No. 518B tag on the front of the case and a tank decal for the Coleman Appliance Co., 439 E. Commerce St., San Antonio, TX. The instruction sheet that came with the stove, in Bill Whitten’s collection, identifies it as a Shur’ Way stove. The stove likely dates to around 1938 based on the model number and burner casting as on Model 418P above. The stove is instant lighting but is otherwise an economy model with no windscreens and the side panels extend below the bottom to form the legs. 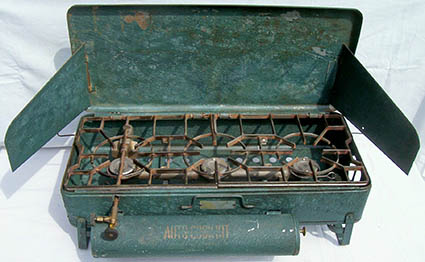 Model 512P appears in Preway Catalog No. 20 from 1938. The case has a “green crackle with black veil finish;” AUTO-COOK-KIT is stenciled on the tank. Two wire controls for the center (front) and right (rear) burners can be pulled out through openings in the right side of the case; moving them up and down controls the amount of heat. This stove was in the late Glenn Knapke’s collection.

This Model 516A Deluxe Auto Trailer Stove may date to after WWII; the predecessor Model 516 appears in a 1940 Preway catalog. This model has the same Ivory Vitreous porcelain enamel as Model 516 and is instant lighting. Joe Pagan restored this hot plate to running condition. The control knob for the auxiliary burner is a replacement.

Preway DeLuxe Hot Plate No. 438P measures 31 3/4″ long x 10 1/2″ high, and the shipping weight is listed as 66 lbs in their 1936 catalog. Bob Meyer repainted the stove with Kennedy Tool Box wrinkle brown; it was originally a brown walnut finish. All 3 burners are running in this image. 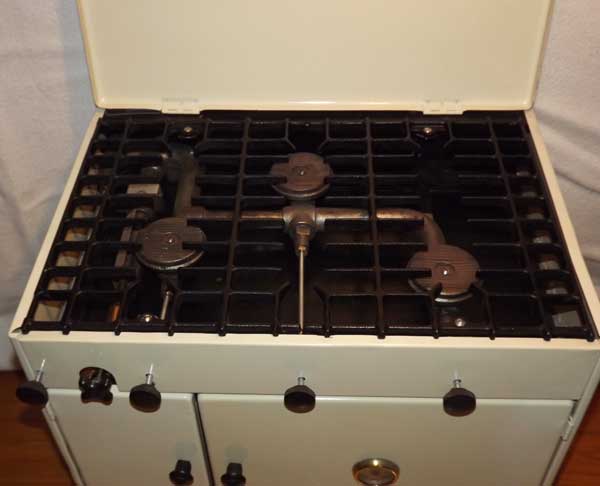 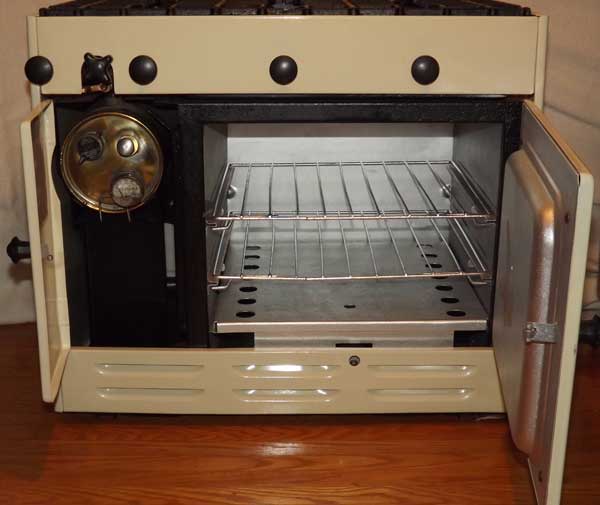 This is a Model 441PT trailer stove by Prentiss Wabers. The stove, in Ken and Carol Lunney’s collection, required a lot of work to restore. It has an unusual triangular burner placement (upper image) and a single oven by the gas tank with integral pump and pressure gauge (lower image). This model dates to the mid 1930’s but we have no literature for it. 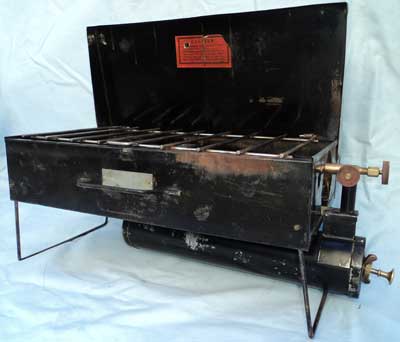 This Model 405 Preway stove appears in a 1936 brochure. The stove is unusual in having a burner that slides in and out of the case on a rail (lower image). The tank hangs below the stove case during operation and stores in the case when not in use. This stove and brochure are in Bill Whitten’s collection. 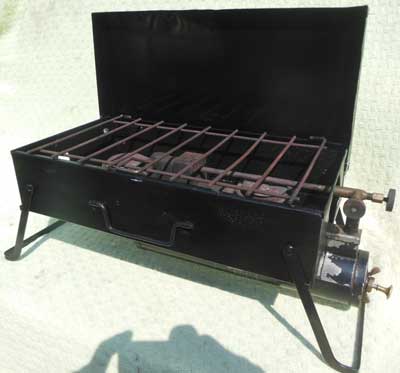 This version of the Model 405 stove, in Darien Williamson’s collection, has strap legs rather than wire legs, that fold under the case for transport of the stove. Darien repainted the stove case to the original black enamel. This stove lacks the tag that was riveted to the front of the case.

This military pocket stove was made for the military by Prentiss-Wabers or Preway. Stamped in this stove is M-1942-MOD and PW-1-45. This stove is in Fred Kuntz’s collection.

Preway Model P4521 is contemporary with Models P4522 & P4523 below. This compact stove, in John Stendahl’s collection, has a number of features that serve to make it sturdy, including the windscreen tabs and a carry handle that levels the stove. The burner on the right is controlled by raising and lowering the rod to open and shut the plug for the fuel-air flow (lower image). 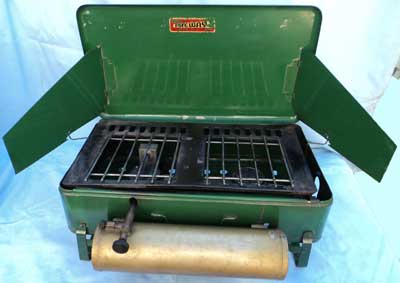 Model P4522 is a two burner version of Model P4523 below. This stove is in Joe Pagan’s collection.

This Preway Model P4523 is a 3 burner stove, that Joe Pagan dates to 1945 – early 47. Glenn Knapke restored this stove, that is in his collection, including cleaning and repainting the case and burners; the paint on the tank is original.

Preway stove Models P4821 (above) and P4822 (below) date to the late 1940’s, according to Joe Pagan, as evidenced by the 48 in the model number. These stoves are in Brien Page’s collection. Model P4821 has an unusual wedge-shaped design; the tank raises the front of the stove and the steel plate in front levels the grate. Both burners were running when he took the image of the P4822. These stoves have a rod with a terminal loop to regulate the right burner.

This 3 burner Preway stove Model P4823 appears to be the same design as Model P4822 above and a successor to Model 4523 above. This stove, in Dave McFarlan’s collection, likely dates to the late 1940’s. 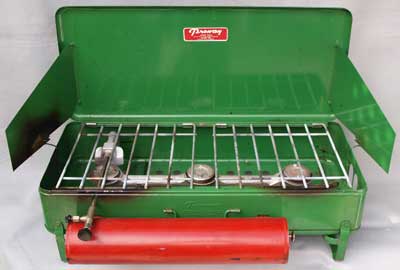 Preway Model P4823R is much like Model P4823 above except for the shape and attachment of the end caps on the tank, the word Close is stamped on the valve wheel,
and there are differences in the decals. The R is stamped after the embossed model number on the case. This stove is in John Stendahl’s collection.