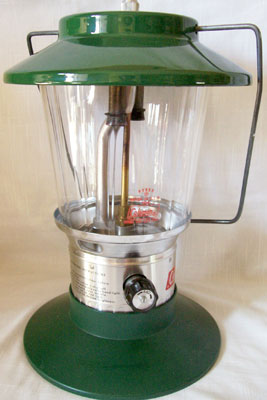 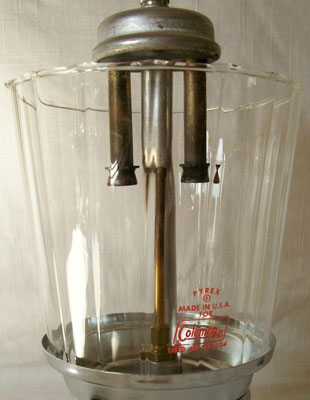 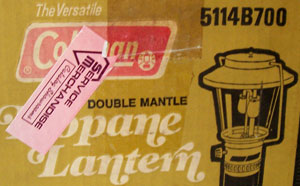 This Model 5114B700 two mantle propane lantern was made for Service Merchandise (lower image) and possibly other retailers. It came with a special “fluted” globe (upper right image) that lacked frosted vertical bars. The fluted globe was also used on Model 275. This lantern, dated February 1979, is in Glenn Knapke’s collection. The LP cylinder isn’t present(upper left image). 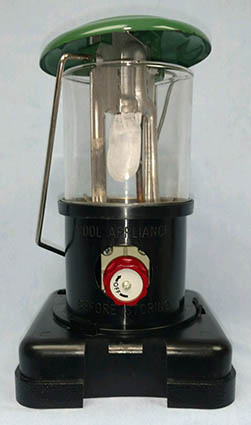 Coleman Canada with their Camping Gaz subsidiary sold this propane fueled lantern Model 5414. The lantern head fits into a plastic sleeve mounted in the base of the plastic lantern case (right image) (the top of the case is not shown). The base also stabilizes the lantern and propane cylinder when running the lantern (left image). This undated lantern is in Marty Edwards’ collection.

This Model 5419A701 propane lantern was made by Coleman – Toronto in January, 1980. In addition to instructions on the collar in English and French a number of parts are listed there. This lantern is in Tim Tucker’s collection. 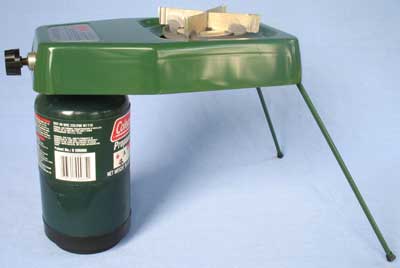 Coleman made three slightly different versions of this stove in the 1970’s-’80’s, all utilizing the propane canister to form the third leg. This one, Model 5418B700, is date stamped Dec. 1979. These stoves are surprisingly sturdy and stable. The two legs fold under the stove and there is a plastic cap (not visible here) to protect the canister connection to the stove. 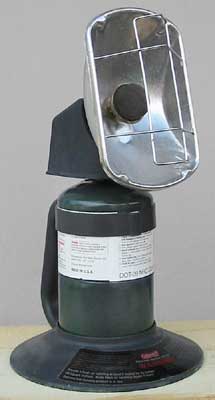 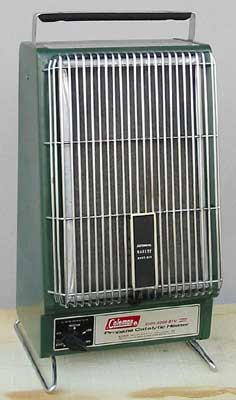 Coleman made the 5155 portable propane camp lantern (left) while the 5155 J version (right) was made for the Japanese market. The Japanese version uses an iso-butane fuel canister. This is a two mantle lantern with electronic ignition. Both are in Brien Page’s collection. The four feet swivel under the base of the lantern on the left for transporting. 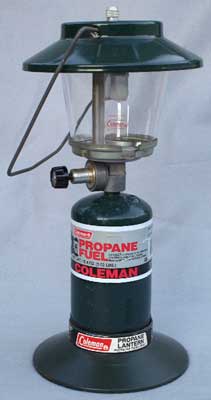 This Model 5152 Coleman propane lantern is date stamped May 1985. John Stendahl, whose collection this is in, notes that the propane bottle is 5103A164 and is date stamped April 1992.

This Coleman Model 5179 Propane Yard Light is date stamped April, 1985. It is in John Morris’ collection.

Coleman Canada made this Model 5429-701 one mantle lantern that is date stamped Nov. 1986. This lantern, in André Giguere’s collection, is also identified as Insta-Lite 2000 on the collar. The lantern has a Piezo ignitor. 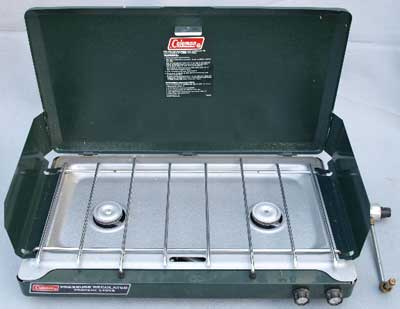 This Coleman Model 5430-700 stove, in John Stendahl’s collection, is unfired. It is date stamped June 1988. The wind screens are attached to the grate, rather than the lid, and fold down over the grate for storage.

Model 5154B700 lantern is a two mantle model with electronic ignition. This lantern, in John Stendahl’s collection, is undated but the paperwork that came with this unfired lantern is dated 1990.

Model 5130-700 was part of Coleman’s Leisure Line. The paperwork with this undated lantern was printed in February, 1991. The orange plastic lever under the bail rotates to the left to increase brightness. This lantern, in Suzanne and Dana Kennison’s collection, takes a No. 51 mantle. 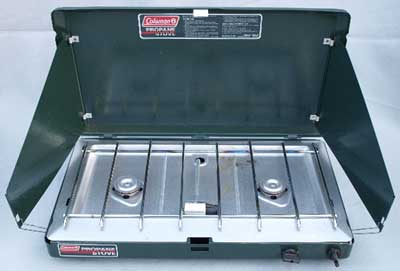 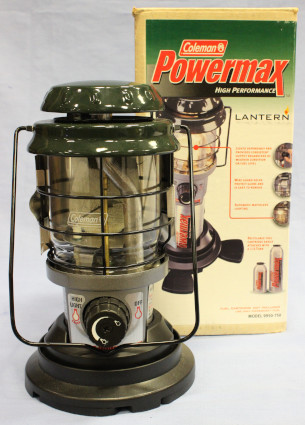 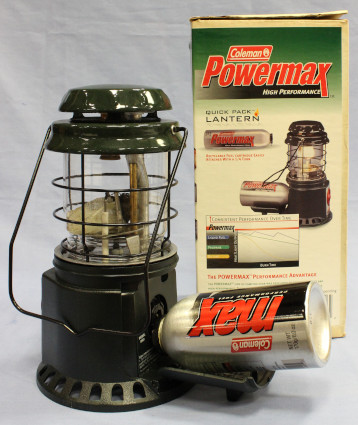 PowerMax lantern Model 9950-750 (left) and PowerMax Quick-Pack lantern Model 9960-750 only appeared in the 1999 and 2000 product catalogs. PowerMax fuel, which is no longer available, was a “High Performance Fuel” mix that included propane and butane. Both featured matchless lighting and adjustable light output. The plastic globe shield for the lantern on the right is not in the image. The fuel canister for the lantern on the left was inserted under the valve. These lanterns are in Pat Ring’s collection. 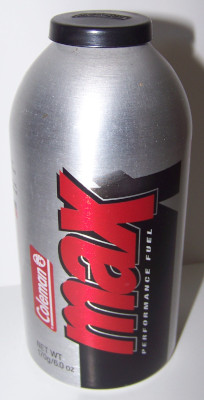 Coleman Family Max camping lanterns (above) and stove (below) powered by Max Fuel provided excellent cold weather and high altitude performance but less then desirable run times and candle power.  The Family appliances were discontinued, however the fuel production continued for the high performance Xponent backpack appliances below. These unused canisters are in Pat Ring’s collection 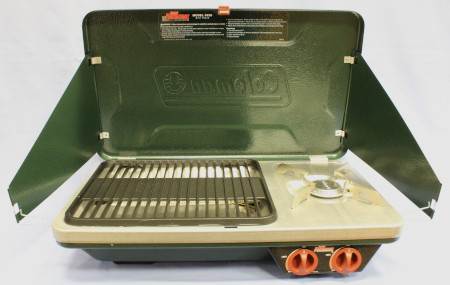 This PowerMax Grill Stove took two PowerMax canisters, inserted underneath and from behind, to run the 10,000 BTU stove burner on the right and the 10,000 BTU grill on the left. The 145 sq. in grill had a non-stick coated surface. This grill stove, also in Pat Ring’s collection, was made in the same period as the PowerMax lanterns above. It also featured “automatic matchless lighting” and “precise flame adjustment.” 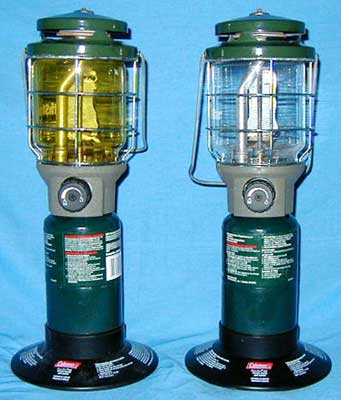 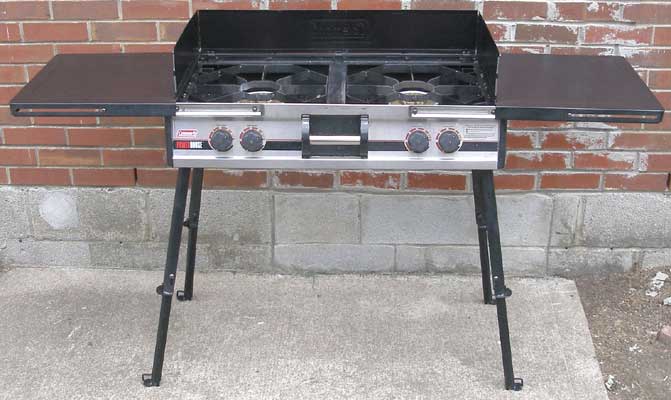 This Model Coleman 9400 propane stove is a larger unit that uses 20 lb propane tanks for fuel. Each of the two burners is rated at 100,000 BTU’s. This stove, in Brien Page’s  collection, is date stamped March, 2004 and was made in China but was designed and engineered in Wichita, Kansas. 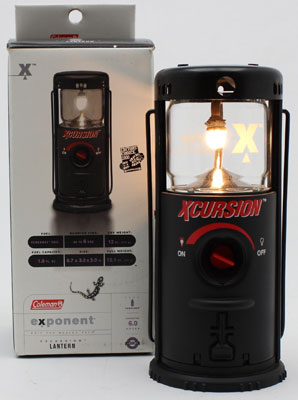 Coleman’s Exponent Excursion lantern 9970-725 was assembled in China. This 10 cp lantern uses Powermax fuel which is no longer produced. The lantern requires a match to light and will run for 6 hours. The lantern has a sliding rear reflector (middle image) and sliding front globe protector (right image). The box is dated October, 2004. This lantern is in John Rugotzke’s collection. 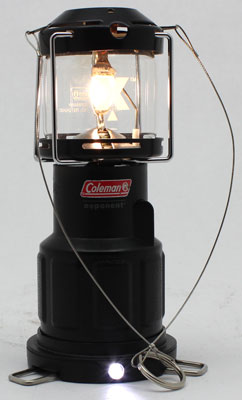 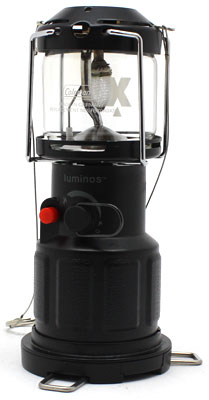 Coleman’s Model 9975 Exponent Luminos is undated but appears in a 2009 Coleman catalog (Ring). This model is lighter, includes electronic ignition and a small flashlight in the base (left image), has 3 folding legs, and a cable hanger rather than a fixed wire as on the above model. It also uses the discontinued Powermax fuel. This lantern is in John Rugotzke’s collection. 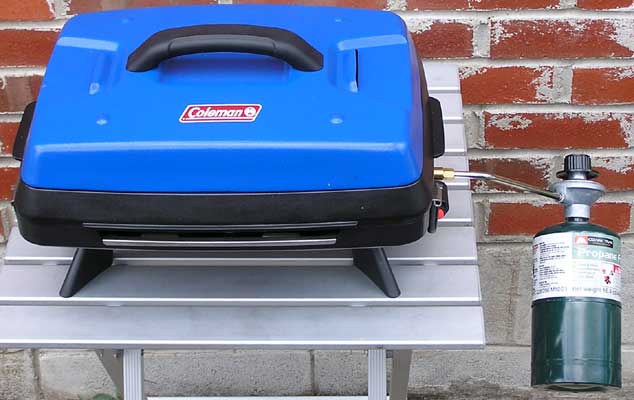 Brien Page reports that this Coleman Model 9933 propane skillet does a great job of cooking eggs, sausage, bacon, and everything else they have tried on camp outs. 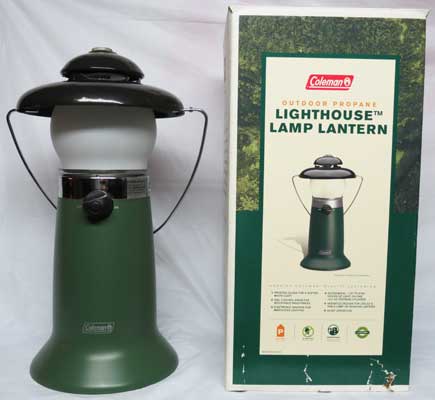 This Coleman Model 5156-700 Lighthouse Lamp Lantern, in Ken and Carol Lunney’s collection, is undated but the box indicates it was made in 2001 and has Patents Pending. This model uses a standard propane cartridge and 21A mantle (Corey). 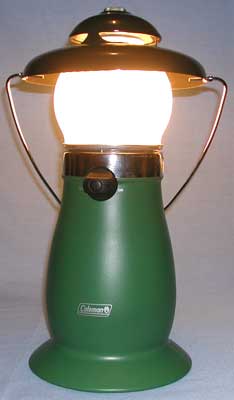 Coleman produced the 2600 Series pinnacle lanterns in 2008 and ’09 (Ring). This lantern, in Brien Page’s collection, uses a 16.4 oz. propane cylinder, has electronic ignition, and is 550 cp with adjustable brightness from a #95 tube style mantle. The top of the lantern stores inside the base when the fuel bottle is removed. 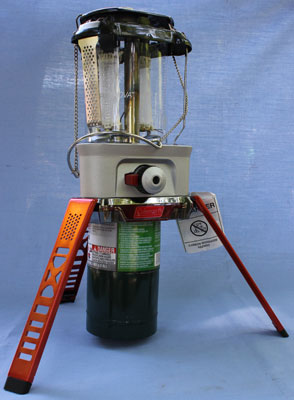 This Northern Nova Model 2555 Coleman propane lantern uses two #95 mantles and is Coleman’s brightest current lantern model (October, 2017), producing nearly 240 cp at its highest setting to a distance of 32.5m away, per their website. The lantern, in Steve Potter’s collection, features electronic ignition and adjustable fuel flow to control brightness.

Coleman also makes this Elite Pro propane lantern (October 2019). It uses two No. 21 mantles and may be up to 15% brighter than a standard Coleman two mantle propane lantern, according to the Canadian Tire website that sells this red ventilator version. This lantern, in Greg Rubin’s collection, also has electronic ignition, adjustable brightness, and a plastic base with retractable feet.