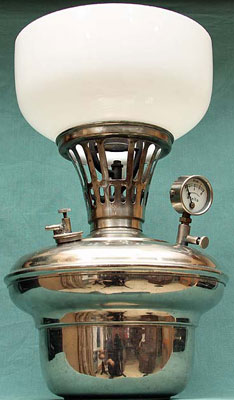 A.B. Atella, an apparently short lived company in Stockholm, made this Simplex lamp circa 1910. The style is similar to the earliest Primus lamps. Christer Carlsson made several missing parts and used an Aladdin mantle to run the lamp (right), which preheats the kerosene fuel in the loop above the burner.

The Primus brand was manufactured by Aktiebolaget B.A. Hjorth, Sweden. Their Model 394/6 is an alcohol fueled variation on Model 994 (below) made during WWII to conserve gasoline. This lamp has the 2/3rds frosted globe =/6 model designation, is date stamped AE=1940, and is in Christer Carlsson’s collection 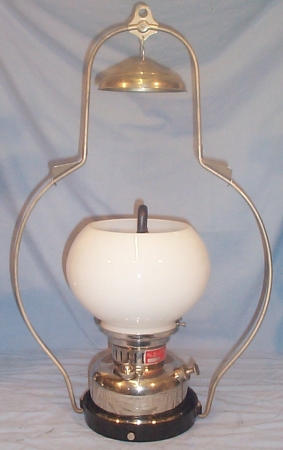 This Model 992 Primus harp lamp dates from 1955. Another 300 cp model but with a different burner from the 1025 above. Complete with an original globe which has a fitting lip on the bottom that is held in place with a three-point screw fixing. Also the top is cut lower down on the globe to reduce the heating effect from the burner. This lamp is in Neil McRae’s collection.

Model 993, as this one dated AA=1936 in Magnus Thilander’s collection, was only a lamp model and did not have a bail/handle. It could be fitted with a enameled reflector or opal glass shade. This 200cp model burns kerosene and is preheated with alcohol.

Model 994, as this one dated AR=1952 in Magnus Thilander’s collection, is another kerosene fueled 200cp model that is preheated with alcohol. This lamp came with a choice of three globes, opal glass as seen here, fluted opal glass, and two-thirds frosted glass.

Primus Model 995, running in this image, is a table lamp model. It is date stamped Z for 1935 on the bottom of the fount. This lamp, in Neil McRae’s collection, is complete with a shade ring but lacks the parchment shade. 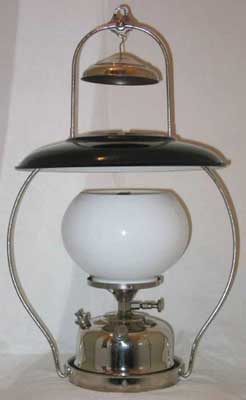 Three views of a Primus Model 1014 table lamp. This lamp is a 300 cp kerosene model. The lamp above is dated 1937 which is rather late for this model. It is shown in the center with the opal globe, =1014/4. This lamp is in Neil McRae’s collection. The same model, lower, mounted in a harp frame with opal globe = 1014/B; This lamp, dated 1931, is in Nils Stephenson’s collection. 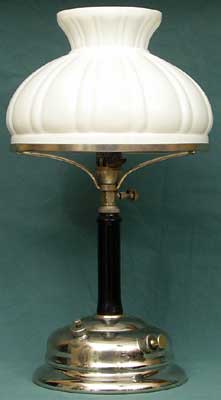 Primus table lamp Model 1015 is similar to 1014 above with the addition of a wood handle and a smaller fount. The lamp is dated stamped U, =1930, and includes the original Primus shade. With this shade and nickel plated fount the model is 1015/2. This 300 cp kerosene lamp is in Christer Carlsson’s collection and weighs about 4 1/2 pounds.

This Primus Model 1022 was Bo Ryman’s first lamp. His family used it for light in a rental cabin that had no electricity. As a teenager Bo retrieved the lantern from a shed, cleaned it up and used it again. Later he found a replacement globe as the original had been broken.

Primus Model 1023, as Model 993 above, was designed to be a lamp. This lamp, in Magnus Thilander’s collection, is date stamped Z = 1935 and has a lyre hanger base attached. The lamp could be outfitted with an “iron plate” reflector or opal shade and could be hung with a lyre hanger or wall bracket. 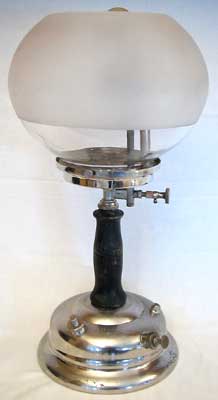 Primus Model 1024/6, in Christer Carlsson’s collection, is designated /6 for the two-thirds frosted globe, which was available on a number of Primus lamp models. This lamp is date coded Y=1934, possibly the year this model was introduced. 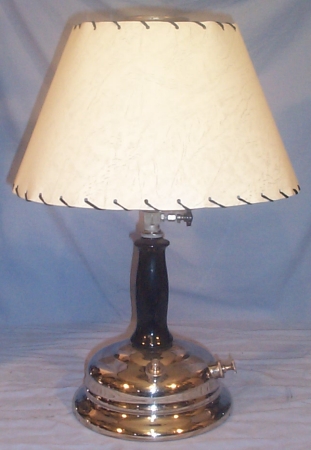 These are two examples of the Primus 1025 table lamp. The one on the left appears to have been designed to be used outdoors. The lamp on the right has a reproduction shade made by Bo Ryman and is a close match to the original. This model is a 300 cp kerosene lamp from the mid ’30s (left) and 1946 (right). It was made in Sweden by Aktiebolaget B. A. Hjorth Stockholm. The lamp on the left is in the collection of Roger Price; image by Neil McRae, while the lamp on the right is in Neil McRae’s collection. 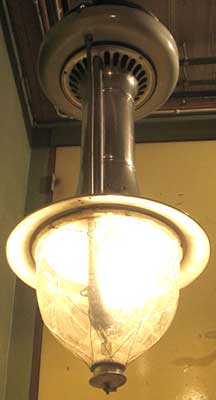 Aktiebolaget Lux, Stockholm, Sweden, made this kerosene gravity lamp street lamp that is nearly 1.5 m tall! Fuel from the fount at the top of the lamp travels down the small tube seen on the left in the left image. The fuel enters a vapouriser within the globe (seen on the right inside the globe in the left image) and travels back to the top where the heated fuel passes through a jet and back down the lamp cylinder (mixing chamber) to the burner. This lamp, in Christer Carlsson’s collection, dates to 1909-20 and produces 700 or more cp. 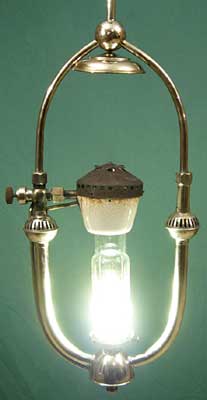 Aktiebolaget Lux also made this Victoria model which is a kerosene gravity lamp for indoors. Christer Carlsson, whose collection this is in, runs the lamp (right) with an upright Aladdin mantle. The Victoria dates to the same time period as the Autolux above. This lamp is missing an outer, tulip-shaped glass shade.

This table lamp model by Aktiebolaget Lux, in Birger Varemo’s collection, dates to the same time period as the above lamps. This lamp is nickel plated; it also came in a brass version with an integrated pump. The upright mantle was hung on the wire suspended over the burner. The globe is a replacement that is similar to the original.

Aktiebolaget Optimus, Upplands Väsby, Sweden made this Model 209 kerosene burner, this 200 cp table lamp is complete with optional shade. This lamp is in Neil McRae’s collection. 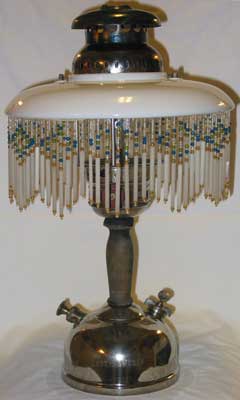 This Optimus Model 210, in Nils Stephenson’s collection, dates to the late 1930’s. Nils notes that the shade fitted to this model determines the model number. The lamp is a 200 cp kerosene model with an alcohol cup for preheating.

When Bo Ryman bought this Optimus lamp it had a different globe and was a Model 250. Bo was able to convince a workmate, who had this globe, to trade it to Bo, thus making it a Model 250A. This is another example of a lamp option on a stove base.

This Optimus Model 252, in Nils Stephenson’s collection, dates to the 1950’s. The fount stamping says 200P because Optimus used the same fount on all models of the same size beginning some time in the 1940’s.

Optimus Model 253, in Magnus Thilander’s collection, is a 200cp kerosene model that likely dates to the 1930’s. This pendant lamp has an added heat deflector. 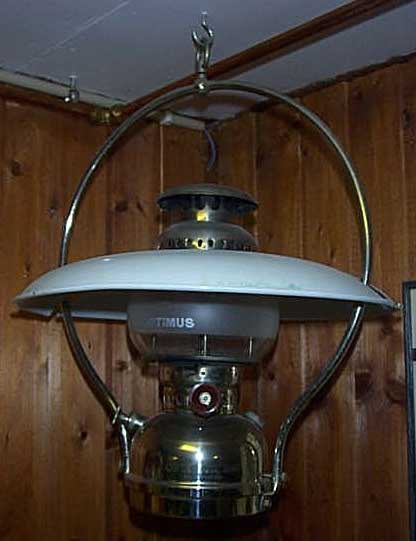 This Optimus Model 268 hanging lamp is in Bo Ryman’s collection. 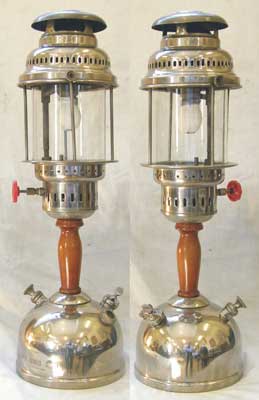 The Optimus table lamp from the 1940’s is either Model 309 or 310, depending on the shade which is missing (Nils Stephenson). This 300 cp kerosene lamp is in Ian Caunter’s collection and was photographed by Neil McRae. 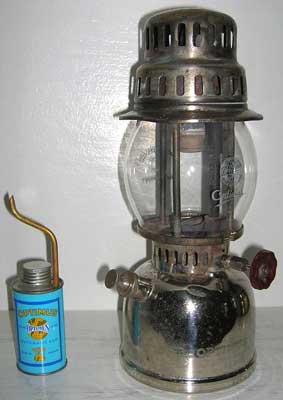 A number of Swedish lamp models were lanterns with shades added. An example is this Optimus Model 930, which was in Magnus Thilander’s collection. The shade is original and the small can is for preheating alcohol for the kerosene fueled lantern/lamp. This version is 350 cp, not 300cp and is so marked.

This is a Radius Model 106A outfitted as a lamp. Bo Ryman bought this lamp from an employee of the Radius factory after the employee had stored it for 20 years in his basement. This 1960’s vintage lamp is in brand new condition. The original fringe is made of glass beads threaded on ribbon and held up by a thin wire pressed under the edge of the reflector.

Small alcohol pendant lamps, like these Radius Model 107s, were made during WWII when petroleum-based fuels were in short supply in Sweden; the fount holds about a  half pint. The lamp has a vented filler cap so cannot develop pressure except by gravity to fuel the generator under sufficient pressure to operate. The lamp on the left is in Neil McRae’s collection. Bo Ryman refinished his lamp on the right to the original.

Radius Models 143 (left), 145 (center), and 146 (right) lamps were sold by the company as options to put on the stoves which are Models 21 (left & right) and 17 (center). The lamp on the left is in Neil McRae’s collection while the ones in the center and on the right are in Bo Ryman’s collection. These models were probably made in the 1930’s.