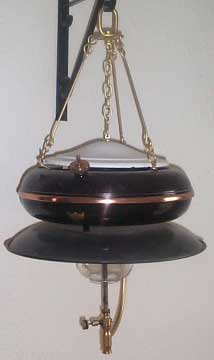 This Tilley Model OL 49 is an outdoor lamp. It was manufactured between 1928-30. It is a 300 cp version of a indoor model that has been weatherized with a close fitting top cowl. One set of instructions warned against using it indoors that could overheat the fount! This lamp is in Neil McRae’s collection; from the collection of the late John Findlay. 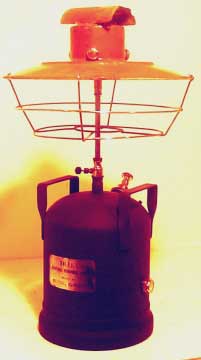 This Tilley Model GL 1 is a general purpose floodlight that was manufactured from around 1933 to ’40. This 300 cp burner is no bigger than the standard lantern and only gives a good spread of light because of the 12″ reflector. This was made for a tripod as on the FL 6 below. This model, in Neil McRae’s collection, lacks the globe but has the correct ventilator and glass cage. 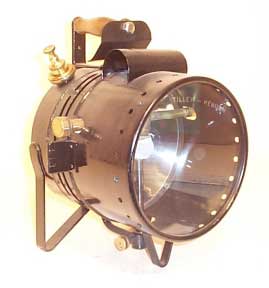 The Model AL 11 dates from 1935 to 1937 and was designed as a rail road inspection lamp. They have a 250 cp burner and give a reflected cp of 1500 or more. This one was given to Neil McRae by a gentleman that had been using it as a headlight on a canal narrow boat. 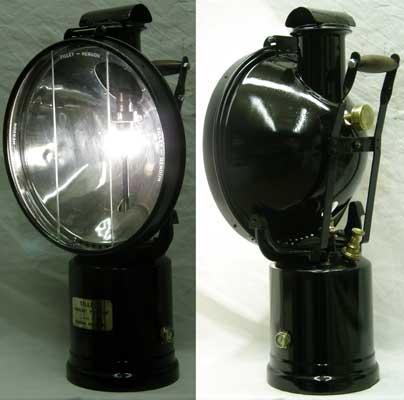 Tilley made this single air tube version (right image) of their FL 5 floodlight in 1935-36, according to Neil McRae, whose collection this is in. Model FL 5 later was made with two air tubes (below). Neil notes that floodlights were primarily marketed to the railways but were also used by road contractors, emergency service personnel, etc. 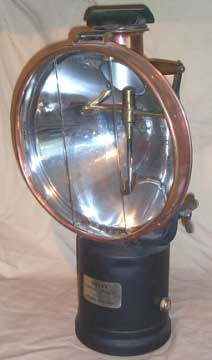 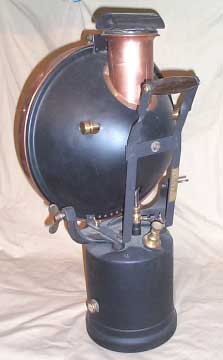 Front and back images of a Tilley FL 5 floodlight, made in 1936-37. These floodlights were mounted on a tripod or stand (see image of an FL 6 below). The plate on the back of this light says “SIG & TELE WOKING” that Neil McRae believes identifies a southern railway that included Woking, England. Neil left parts of this lamp with polished metal rather than returning it all to the original black. 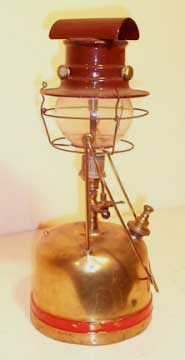 This Model PL 55 lantern dates from the late 1930’s and was used by a rail road company. The red band on the fount denoted a maintenance and emergency gang. This is a larger fount version of the PL 53 and was a predecessor to the BR lanterns. This lantern is in Neil McRae’s collection. 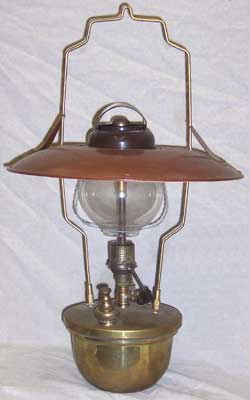 Neil McRae and Tilley book author Jim Dick agree that this lamp was probably built by Tilley as Model EX93 originally for the Victorian Railway in Australia in 1938 for station platform lighting. Neil’s version of this lamp (above-UK) has the GF control cock while Jim Dick’s lamp in Australia has the XN control cock. 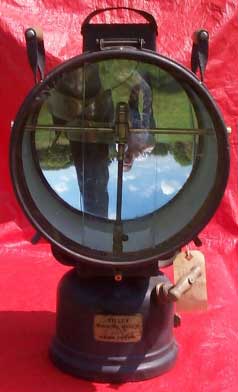 The Tilley Model SL-1 searchlight was manufactured from the mid 1930’s into WWII. This searchlight is capable of 20,000 reflected cp, according to Jim Dick in his Tilley book. This model is in Neil McRae’s collection; from the collection of the late John Findlay. 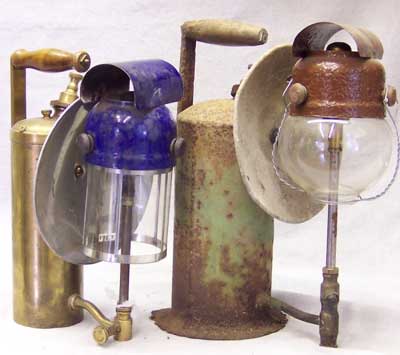 Model AL 10 hand inspection lamp (left) was designed for use by the rail companies and was made around 1934, according to Neil McRae whose collection these are in. The unknown inspection lamp (right) may have been made by Tilley in the late 30’s or during WWII by an individual who combined an old AL10 and a new steel welded fount.

Bo Ryman restored this Tilley floodlight Model FL 6 including painting it and recreating the transfer label. It is marked for the Swedish Civil Defense. This model, seen here with the Tilley tripod stand, was manufactured between the mid 1940’s and early ’50’s. 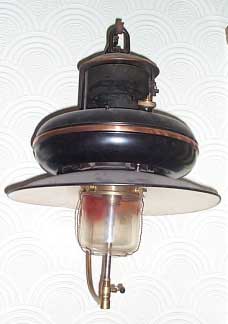 The Model OL51 is a 500 cp outdoor donut lamp. Tilley made these from the mid 1930’s to around 1962. As with all donut lamps, this model was used mainly by the railways. It is in Neil McRae’s collection. 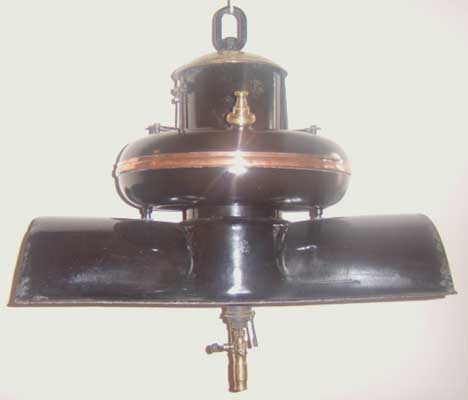 The Challow lamp is named for the station in the UK on the Great Western RR line where the model was first used, according to Jim Dick in his book on the Tilley lamp. The reflector directs the lamp’s light along the axis of the platform and the lamp can be raised and lowered for fueling and maintenance. This lamp is in Kenny Connolly’s collection. 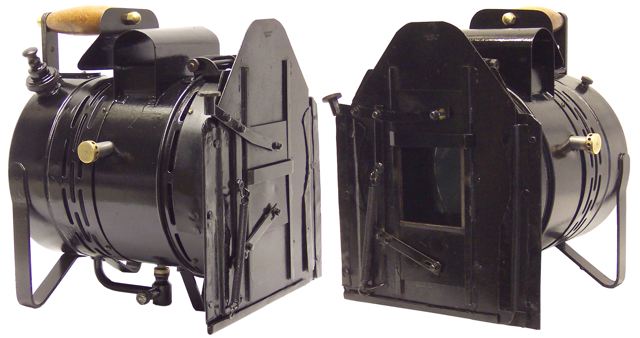 The Irish Coastal Rescue Service commissioned the addition of signal shutters to the first version of Tilley Model AL21 (1937-40) circa 1938. Neil McRae, whose collection this is in, learned that one of these signal lamps was standard equipment on each rescue cart. Local blacksmiths were employed to make the frame to hold the supplied shutter on the lamp based on a drawing of the frame to be fabricated. 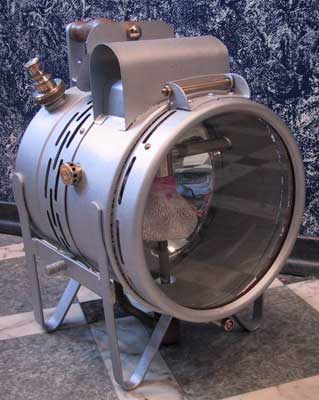 This version of the Al21 from the 50’s was painted black before Stephan Kalkbrenner, whose collection this is in, restored it in gray as it was used at the Technisches Hilfswerk or THW (Federal Agency for Technical Relief). Many of these lamps were used earlier by the Ziviler Bevölkerungsschutz or ZB (Civil Defense) but went to the THW when the ZB was disbanded (Marc-Andre Müller). 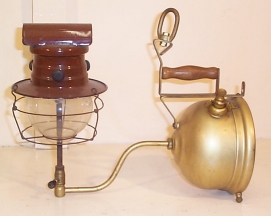 The British Army calls this Tilley “Hospital Lamp” a “Lamp Paraffin Pressure Hospital and Survey.” This model can be wall mounted, suspended by the central hanging loop, stood on a table, or carried. This is an ex military lamp ca. 1954 that Neil McRae obtained from a shop keeper on Canvey Island. It had been used for perhaps 5 hours for emergency light. 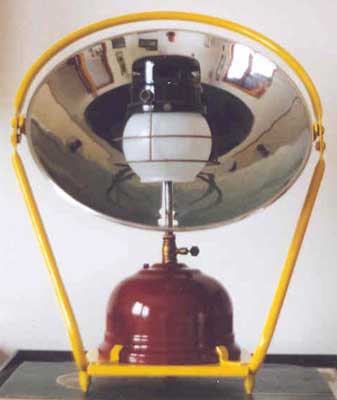 Tilley made the OH574 lamp for specific needs, such as inspecting overhead cables from underground railroad tunnels, according to Jim Dick, who notes that the reflector can be tilted from nearly horizontal to nearly vertical. The lamp reflects 4000 cp. This lamp is in Jeff Johnson’s collection. 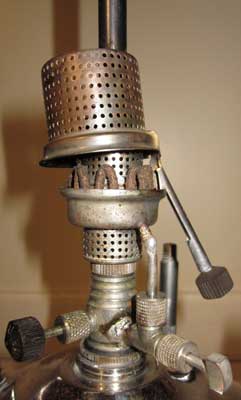 Model BR (British Rail) 49 was sold to the public but the vast majority were railroad lanterns. The model is a modified X246 with a kerosene fed wick device for pre-heating (middle image). The extended frame allowed Tilley to use a longer 169 vapourizer (Jim Dick). This lantern is in Frederick Tivemark’s collection. To see subsequent BR models click here. 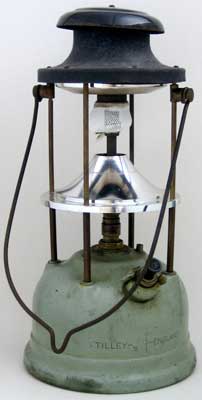 Tilley made their SDR lantern on special contract for the Rijkswaterstaat (waterways and highways authority) in the Netherlands circa 1954-56. Neil McRae, whose collection this is in, notes that they always show up in this color. Earlier versions of Model SDR are here. 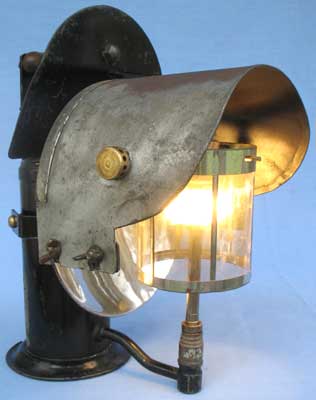 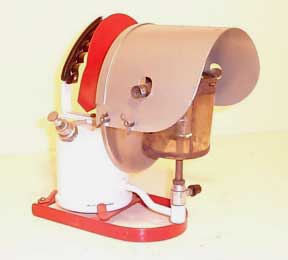 This Model AL 8 was designed in the 1930’s for use as track work lamps for the rail companies. This is a late one that dates to 1961 and is unusual with a black, rather than brown, ventilator. The 300 cp burner gives about 1000 cp of reflected light. This one is also in Neil McRae’s collection. 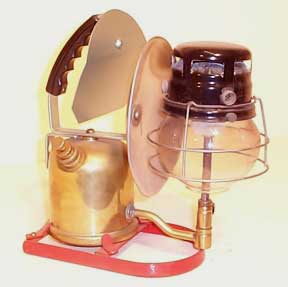 This AL 620 is another inspection lamp but with a standard conversion head and the same globe as the table lamps use. This one, in Neil McRae’s collection, dates to March, 1966. 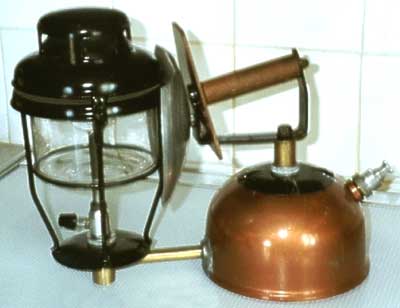 By the 1970’s and 80’s Tilley was no longer making inspection lamps so London Transport made their own from Tilley X246 parts. This lamp was photographed by Neil McRae, who has designated it LT1. The Tilley Lamp Company has confirmed for Neil that this one was made by London Transport. 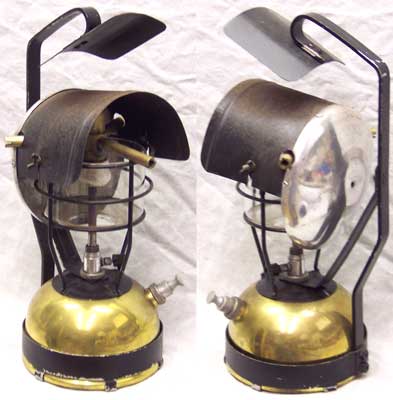 A second inspection lamp by London Transport from the same era as above. Neil McRae, whose collection this is in, has seen one other like it. Neil has designated this lamp LT2. 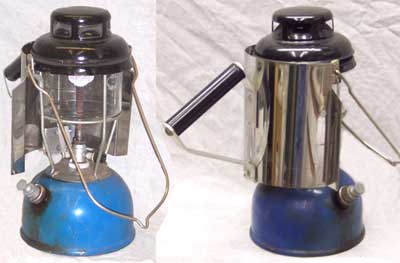 A third inspection lamp by London Transport as above. This one, in Neil McRae’s collection, was given to him by a man who used it while working for London Transport. Neil has designated this lamp LT3.