The Blanchard Incandescent Lamp Company of London, England, manufactured this lantern probably between 1910 and 1920. This model used a soft rag mantle on a ceramic ring. Neil McRae restored this lantern to near the original colors. Note the fuel line is outside of the globe cage.

This Evening Star lantern was made in the mid 1920’s by Curtis’s & Harvey Ltd., Wandsworth, London. Built in the American style, this lantern has two mantles and a generator with the same sort of fitting as on Akron’s Diamond brand. After 1925 this company became part of Lighting Trades Ltd. then disappeared around 1931. This Model R92076 lantern is in Neil McRae’s collection. 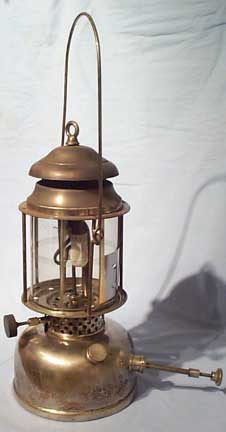 The Evening Star lantern was made by Curtis’s & Harvey, London. This model is similar to their R92076, Stormproof lantern, above but has a unique integral pump. The pump handle’s inner shaft is threaded and can be screwed into the pump valve to form a positive seal as on many Coleman models. The mica globe is a reproduction by Fred Kuntz. This lantern is in Henry Plews’ collection. 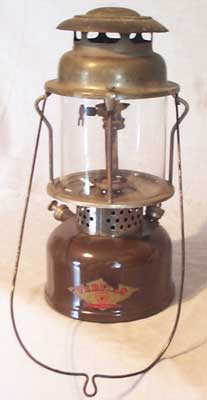 Falk, Stadelmann Co, London, made this Veritas Model P9955B lantern. It is a 300 cp kerosene burning model. This model has a tip cleaner at the top of the generator and is operated via a linkage that runs through the base plate (missing here). This lantern is in Neil McRae’s collection. 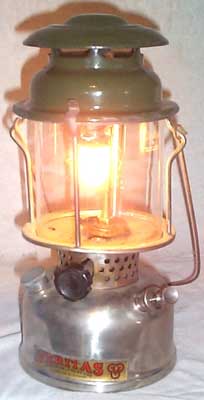 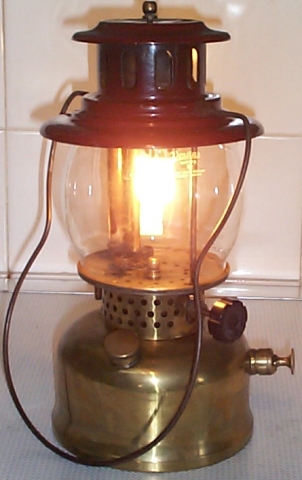 The Falk, Stadelmann Co. also made these Veritas Models 350 (left) and Superb (right) lanterns, both seen here working, a difficult feat as they are temperamental. The Superb lantern has a burner that looks similar to Coleman cast brass burner units but the generator is in the same style as Tilley and Bialaddin vaporisers. These lanterns are in Neil McRae’s collection. Both models were produced in several finishes.

Veritas Model 350B also uses paraffin (kerosene) as do most European appliances. This model has an alcohol preheater cup (upper right image). The bail (missing in the upper left image) fits on the frame uprights where they are bent away from the globe. This model was rated at 350 cp (McRae). This lantern is in Andrew Brown’s collection. 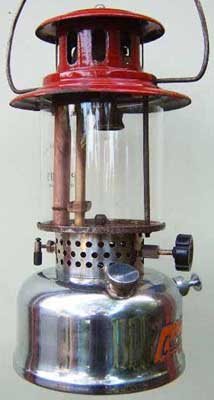 Another version of the Veritas Superb lantern above, this one is badged Coleman Ranger 239E, Paraffin (kerosene), and Made In England. This lantern is in Colin Mills’ collection. Neil McRae dates this lantern to the 1950’s-60’s but we have no information on its  manufacture. 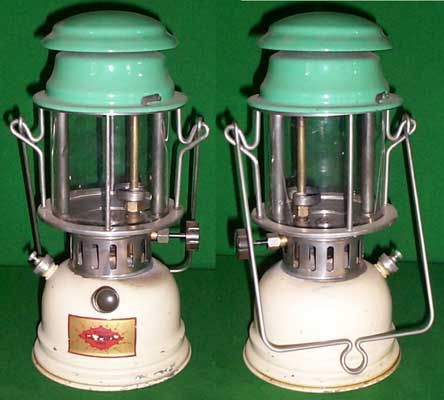 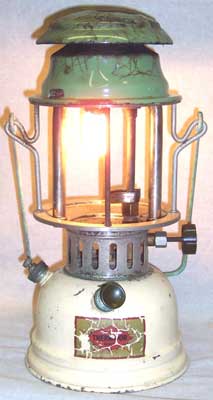 The Thermidor brand lantern was manufactured by Samuel Heath & Sons, UK, probably in the 1950’s. The fount, controls, burner and base are the same as on this Veritas bowl fire (radiant heater). The lantern on the left belongs to John Mountstevens; the running Thermidor on the right is in Neil McRae’s collection. This lantern was also badged and sold as a Veritas by Falk Veritas (Neil McRae). 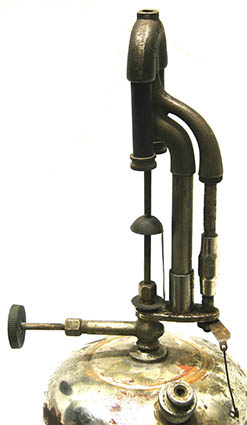 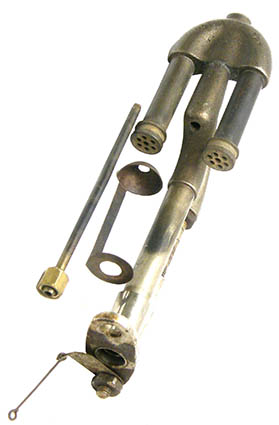 J. M & D. Hunter, Birmingham, England, primarily made Nulite products, presumably under license from that US company, but also created their own burners, including this Type 2 burner for their appliances, including this 3H lantern, for a brief time, circa 1923. There is a wire below the burner assembly (lower image) to open and close the air intake cover and a coupling on the burner support (upper right image) that is awkward to use to remove the burner and prick the generator. This lantern is in Neil McRae’s collection.

Kynoch Ltd, Birmingham, manufactured this 300 cp kerosene lantern based on a design by National Stamping & Elec. Works, Chicago, USA. The torch lighting lantern is almost all brass construction with a copper badge (lower image) This lantern and a tripod stove model were announced in The Ironmonger, a UK periodical for the hardware trade, in a December 1920 issue. This lantern is in Dennis Peterson’s collection. 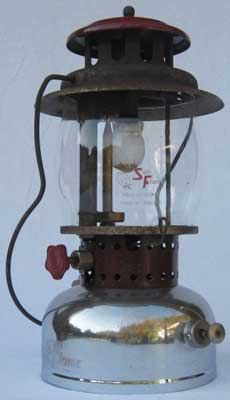 This SunFlame Model 106 lantern is stamped Made in England (lower image) and SF Appliances Ltd., London, England. It seems to be the same as the 106 model made by SF Appliances in the US except for the ventilator that has a different hole pattern and lower piece which was plated rather than enameled. This lantern with original globe is in Gary Rudd’s collection. 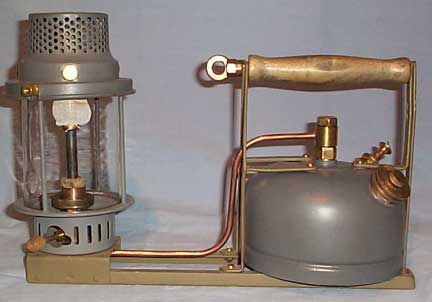 This early Vapalux hand lamp was only made under military contract during WWII. Vapalux is a brand of Willis & Bates in the UK. This model is in Neil McRae’s collection;
from the collection of the late John Findlay. 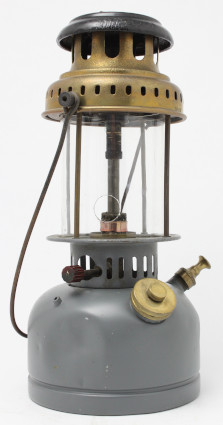 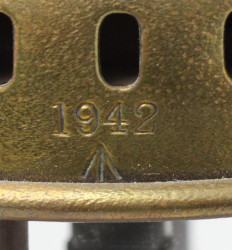 This Model E41 lantern by Willis & Bates includes a Ministry of Defense arrow stamp and 1942 (lower image) above the lower lip of the ventilator. This lantern was also only made for the military during WWII. The fount is brass on this lantern. The period correct globes on these two appliances include lighting holes. The vapourizer (generator) on Willis & Bates products passes through the mantle as on Tilley products. Willis & Bates appliances are also kerosene fueled and preheated with alcohol. This lantern is in George Burl’s collection. 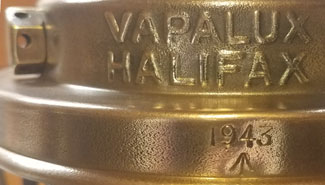 This Vapalux Model 300 lantern is distinguished from Model E41 above in having hexagonal air intakes sticking out of the ventilator cap. This lantern, in George Burl’s collection, has the Ministry of Defense arrow and 1943 date stamp (lower image). The fount is steel rather than brass. A decal on the fount alerts the user to empty and clean out the fount weekly to avoid rust formation inside. This lantern also has the original globe with the lighting hole (upper image). This lantern lacks the pressure indicator in the shoulder of the fount. 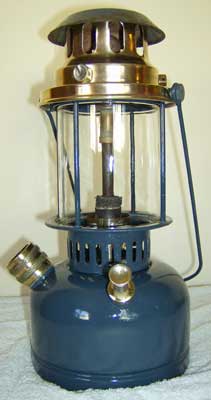 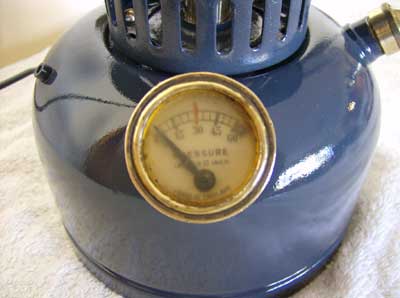 This Model 300 Vapalux has the Ministry of Defense arrow and is date stamped 1945. The manometer (lower) doubles as a filler cap. Kenny Connolly, whose collection this is in, carefully matched the blue paint to the original during his restoration. The fount on this lantern is brass. 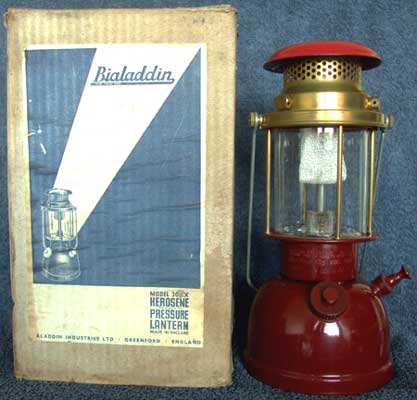 Aladdin Industries Ltd., Greenford, England, marketed this Bialaddin 300X Model made by Willis & Bates, Halifax, UK. This lantern, unfired and with the box, was made in 1948 and is in Steve and Jill Wood’s collection.

This Model 300X is date stamped 1949 and has the Ministry of Defense arrow and A.M. (Air Ministry) also stamped on the base rest. The lantern is in Philip Rhoades’ collection.

Bialaddin 305 came with a chrome fount and green enamel ventilator as seen here in George Burl’s collection, and with a green fount and ventilator. The filler cap is a smaller 1″ diameter compared to the 300X above and the ventilator shape was changed. This model dates to the early to mid 1950’s.

Bialaddin Model 310 was made in 1954-59, according to Neil McRae. This lantern, in John Bell’s collection, has a green painted fount. Compare to the version with the chrome plated fount below. This one has the original Bialaddin Pyrex globe. As on Model 315 below, this model has an alloy globe cage. 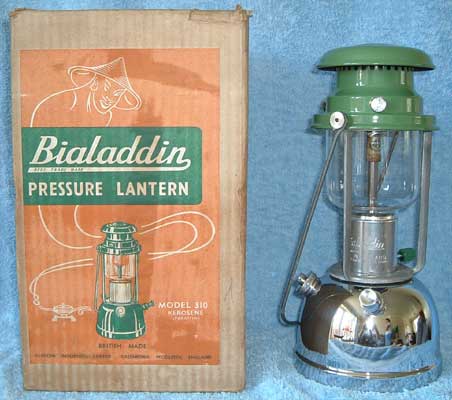 This unfired Bialaddin Model 310 was made by Willis and Bates, Halifax, UK. Compare this chrome plated version, also dating from 1954-’59, to the green painted version above. In this model the glass rests on the collar, not on indents on the 3 alloy legs as on the models below. This lantern is in Steve and Jill Wood’s collection. 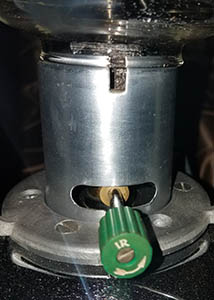 This 310 lantern is stamped Imber Research, another UK company, on the collar but is otherwise the same as the Bialaddin version above and dates to the same period. Neil McRae believes this lantern was only available in the US. There is a small hole in the collar (lower image) for adding methylated spirits (alcohol) into a preheater cup and for lighting the preheater fuel. This lantern is in George Burl’s collection. 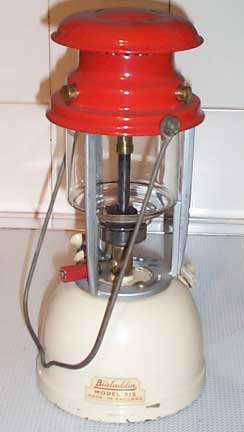 This Model 315 lantern was made from the early to late ’60’s. This 300 cp kerosene lantern, in Neil McRae’s collection, is unusual in that it is finished in cream paint rather than silver/gray paint. 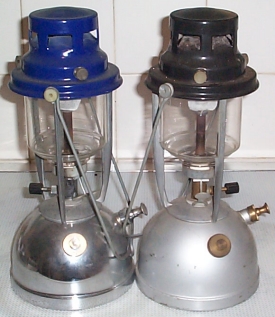 Willis and Bates made these two Model 320 lanterns under the Vapalux brand after 1968. The lantern on the left is a Rothman’s special, chrome plated, which was available by redeeming cigarette stamps. The standard lantern was available in either chrome plate or silver paint. Both of these lanterns are in Neil McRae’s collection.

Neil McRae dates this unusual Model 320 to the late 1960s when chrome plated founts and two piece green enameled ventilators were standard parts, although not seen paired in this combination before. Neil further notes that lanterns with chrome plated founts were more expensive. This lantern, in Logan Bourdon’s collection, came from a Coleman executive’s estate in Wichita, Kansas (Bissell).

Vapalux Model M1 is a military version that probably dates to the 1960’s according to its owner, Doron Papo.

Willis & Bates sold this civilian version of the M1 between 1968 – 1979, according to George Burl, whose collection this lantern is in.

Vapalux Model M1B was made by Bairstow Brothers Ltd., formerly Willis and Bates. This lantern, in George Burl’s collection, holds a litre of kerosene that will allow it to operate for 10 hours, at approximately 60 watts, according to the manufacturer.