Models RL-2 (left) and RL-3 (right) appear in an AGM catalog when it was a Division of Queen Stove Works in the mid-1950’s. They are comparable to Coleman 200 and 220 series models respectively. These models have better designed pumps than the pumps on later AGM models (see below).These lanterns are in John Stendahl’s collection.

This RL-3 is running with an optional AGM SR-3 reflector that listed for $1.95 in an AGM price guide dated Feb. 1956. Kevin Darnell only found the stamping on the reflector after he cleaned it. Clips on the sides of the reflector attach to the frame uprights. 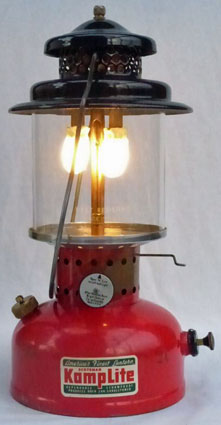 This AGM KampLite RL-31 was the successor model to Model RL-3 above. The frame above the base plate was eliminated and the bail attaches to holes in the mixing chamber casting through holes in the ventilator. You can see the casting in a image of the burner on Model RL-32B below. The mixing chamber castings in this RL-3 series are all magnetic rather than brass. This lantern is in Erwin Schäfer’s collection

The manufacturer of this Model LRL21B lantern is identified as American Gas Machine Co., a Division of Queen Stove, Inc., Albert Lea, Minnesota. The pump is more cheaply made of aluminum and there is no screen in the burner cap so that the fuel air mix can ignite in the burner tube making a popping sound. 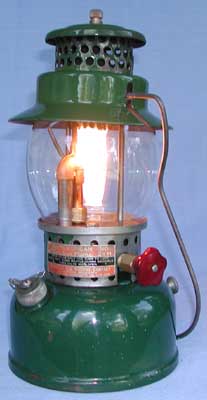 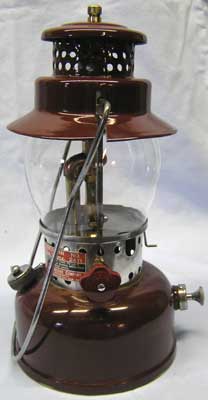 American Gas Machine Model 2471 probably predates Model LRL21B above as the company name doesn’t include Queen Stove Works. It has the same generator and burner type as the above but the generator is threaded to the burner and the air tube connection to the burner is a casting, not stamped. The brass fount had stress cracks that I sealed with an automotive gas tank sealer (left) the maroon version of this model (right) is in Joe Pagan’s collection. 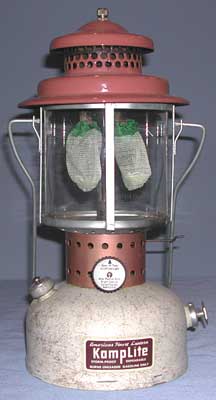 The AGM Co. became the Queen Products Division of the King-Seeley Corp. and remained in Albert Lea, MN. These KampLites, Model LRL22 (upper left), RL33 (upper right), & LRL42 (lower) were possibly manufactured in the ’60’s. Models LRL22 and LRL42 are single mantle lanterns. The lantern in the upper right is in Ken Mackenzie’s collection and the lantern in the bottom image was in the late David Jahn’s collection.

This Sears Model 710.74000 lantern was probably made before the pair of lantern below, based on the more expensive pump, in the style of Coleman’s pumps. The lantern is in Scott Iverson’s collection. The decal on the fount is larger than the decal on Model 710.74001 below.

These lanterns were probably made by the Queen Products Division as the one above, but have decals identifying them as J.C.Higgins lantern for Sears Roebuck & Co. Model 710.74001 (left) and Model 710.74011 (right) are both single mantle lanterns. Apparently earlier versions of these two models, 710.74000 and 710.74010, have Coleman style pump handles and larger decals. The unfired 710.74001 on the left is in Zack MacGregor’s collection; Model 710.74011 on the right is in Nick Kruzan’s collection. 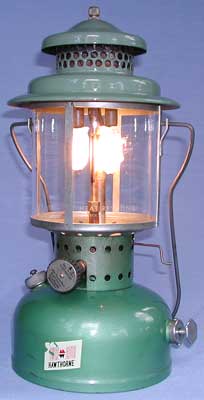 AGM made this Hawthorne Model 60-9520 (left) two mantle lantern for Montgomery Ward (McRae). The AGM Kamplite Model RL-32B (center and right) differs from the Hawthorne in lacking a frame, in having the bail insert into holes in protrusions in the mixing chamber casting (right image) after passing through the ventilator, and in having a steel filler cap rather than non-magnetic as on the Hawthorne. The pumps on these models no longer include a hole in the handle that needs to be closed with a thumb during pumping and probably reduced the cost of making the lantern. 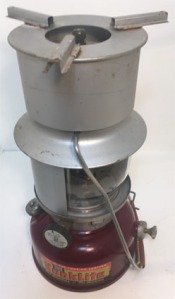 The KL-2 KookLite doubles as a lantern and a stove. With the globe shield open (upper image) the lantern casts a directed light and, with the shield closed and the hood slides extended, it serves as a stove/warmer. This earlier version of the KL-2 was finished in maroon. The cook top opening (lower image) couldn’t be changed as on the later version below. This lantern-stove is in Ken Brown’s collection. 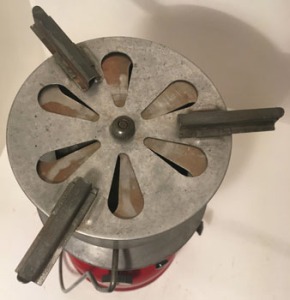 This later version of the KL-2 was finished in red, rather than maroon, as above. The cook top (lower image) has a rotating piece under the top plate that allows the user to vary the amount of heat reaching the cook top, a feature lacking on the maroon version above. This KL-2 is also in Ken Brown’s collection. Both of these versions of the KL-2 appear in AGM Repair Parts and Supplies Catalog No. 56, circa 1956. 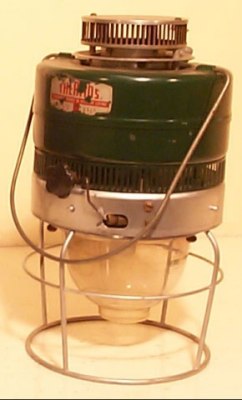 The most unusual lantern produced by King-Seeley Corp. is this Thermos 8321 doughnut or inverted model (left) and as KampLite (here Model IL-11B) in red. The lantern on the left is in Neil McRae’s collection, while the lantern on the right is owned by Bruce Bandow/Lila Richards. The IL-11B has the original 7506 mantle; this lantern has never been lit. Since the fount is above the light they cast no shadow when used as a hanging lantern. 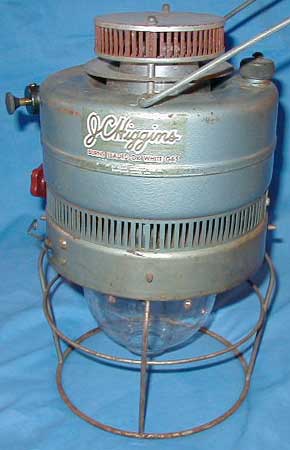 Two views of the KampLite Model IL1 inverted lantern, the first lantern in this series, here made for Sears under their J.C.Higgins brand. This model had two spherical nuts, not screws, holding the ventilator on the top and the older and presumably more expensive pump assembly. This lantern has the optional reflector fitted in the right image. This lantern is in Brien Page’s collection. 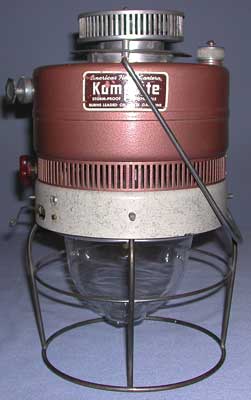 Another color version of the KampLite IL-11B model, comparable to the LRL22, RL33, & LRL42 models above. This lantern is in Ken Mackenzie’s collection.

This mil-spec lantern is stamped 1963, U.S., Macomb Plant, Thermos Division, King-Seeley Thermos Co., Macomb, Illinois. This is the only year that Thermos had a contract to build this model for the government. This lantern is in Andy Sorensen’s collection. 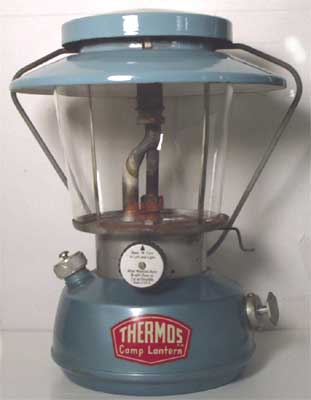 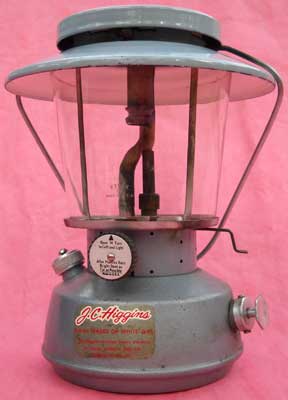 Thermos Model 8311 is a single mantle lantern that lacks the ventilator “dimples” and indentation in the collar to reach the lighting hole as seen in Model 8312 below. The Thermos lantern (left image) is in Thom Kivler’s collection while the J.C. Higgins version (right image) is in Gregg Slezak’s collection. 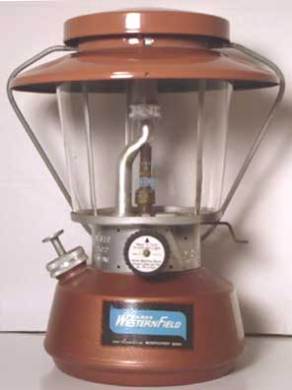 Thermos Model 8316 is another single mantle lantern with an indentation in the collar to reach the lighting hole and has the ventilator “dimples”. This lantern, in Bob Jarvis’ collection, is the same size as the two mantle lanterns below.

Thermos Model 8325 (upper image) may have been a short-lived predecessor to Model 8326 below. On the <lower left this model is badged Hawthorne 60-9536 for Montgomery Ward <and on the lower right badged JC Higgins 710-74570 for Sears. This model differs from Model 8326 in lacking dimples in the ventilator, separate fuel filler and pump, and an indent in the collar for the lighting hole. The lantern <in the upper image is in Thom Kivler’s collection, while the lantern on the lower left is in Don Colston’s collection and the one on the lower right is in Marty Edwards’ collection.

A very common lantern is this Model 8326 double burner Thermos. The original box that came with the Holiday Thermos (right image) is dated Feb. ’63 Note the indented globe rest to provide a lighting hole for the mantles, a feature that is present on both the 8312 and 8326 models. The lantern on the left is in Chris Fearon’s collection.

This Thermos 8326 lantern was made by Thermos for the Western Auto Supply Co. They sold it as Model 8GC5597 Revelation Camp Lantern (right image). The Thermos 702 globe doesn’t have the same dimensions as Coleman’s tapered globe. The combination filler hole/pump opening can’t be seen in these images. This lantern is in Daniel Nunn’s collection.