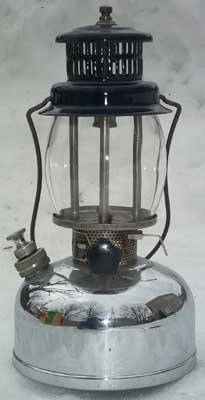 Models 3606 (left) and 3608 (right), are one mantle, instant lighting models that AGM introduced in 1936. The globe on the 3608 is labeled “MacBeth Thermo Made in USA” and the globe cage has been repainted. Model 3606 is in Agostino Del Coro’s collection. The tags on the base rests of these lanterns are similarly shaped and worded as the tag on Model 3618 below. The burner assemblies on these two models are the same as the one pictured on the lantern below as 3608 for unknown retailers 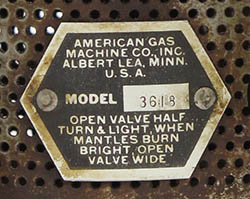 AGM Models 3614 (upper left), & 3618 (upper center and right) are two mantle, instant lighting models that were also introduced in 1936. The burner assembly (upper right) is the same on Model 3614. The globe on the 3614 is also labeled “MacBeth Thermo Made in USA” as on Model 3608 above. The hexagonal tag on the base rest (lower image) is similarly worded on each of these lanterns. The lighting instructions indicate that they are instant lighting.

AGM made these unmarked lanterns for unknown retailers that are the same as Model 3608 above, except as noted. The one on the left and lower image, in Cain Kremitzki’s collection, has a nickel plated brass fount and green enameled ventilator while the one on the right, in Tim Helmer’s collection, has a steel sided fount that is painted green and a green enameled ventilator. The mixing chamber casting (lower image) has an attached plate above that is covered by the ventilator cap. This added plate is the only difference I can see between these lanterns and Models 3606 and 3608 above versus Model 100 at the bottom of the early AGM lantern models page.

This Model 3614 was found in the Pacific Northwest. It was marked by the U. S. Forest Service with red painted letters, U.S.F.S., on the side of the fount and stamped F.S on the fount rim (lower image) This lantern, in Nick Loe’s collection, has a replacement red valve wheel for the original black valve wheel as on the 3614 above – lower left. 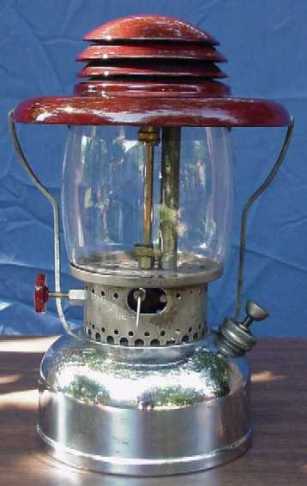 This is a pair of art deco styled AGM lanterns, Model 3708 on the left, single mantled, and Model 3718 on the right, double mantled. These 1937 lanterns burn either gasoline or kerosene. The Model 3708 is in Craig Seabrook’s collection. The Model 3718 is in Darcy Vantiger’s collection; photo by Dwayne Hanson. Note that there is no top nut. The top part of the ventilator unscrews to release the rest of the ventilator.

Model 3705 is a steel fount lantern that burns kerosene or white gas. This model is 12″ tall and weighs 5 lbs. The only accommodation for burning kerosene is an alcohol cup (upper right image). The valve stem is ~8o tilted down from horizontal (lower image), a unique feature to this model, presumably to aid the flow of air into the intake tube. Note the Art-Deco stamping on the base rest.

Model 3905 is similar to Model 3705 above except that the valve is horizontal and it is gasoline fueled. This lantern, in Bruce Strauss’ collection, is not marked AGM but came in a box addressed to Wisconsin Auto Stores so may have been made for this company. 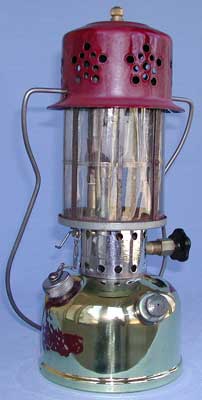 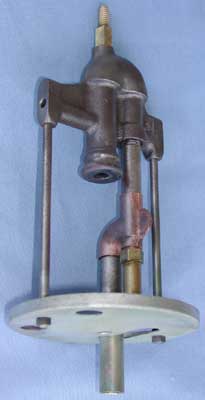 AGM’s Sun Flame Model 2570 is often found with stress cracks in the brass fount. This one (left) is polished to brass with only a little of the original maroon paint left. The burner (center) lacks a screen in the 8 mm diameter burner cap resulting in “backfires” when flames enter the burner chamber under certain lighting conditions. The top of the generator screws into the lower air tube, an unusual feature. This lantern is in Joe Pagan’s collection. Mounted on a comparable fount from a Sears 7426 (= AGM 3006) the lantern still runs (right). 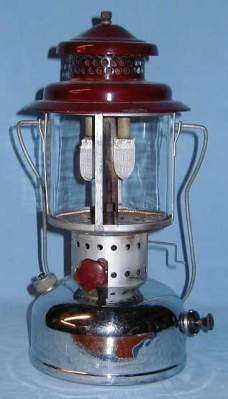 Above are three versions of AGM’s Model 2572, a lantern model that probably dates to the 1940’s. The Sun Flame version (left) has the familiar maroon ventilator. This all original lantern is in Fred Kuntz’s collection. The green version (center) is not stamped U.S. on the fount bottom as are other AGM lanterns approved for military use in WWII. The maroon version (right), in Dean Dorholt’s collection, includes the original McKee Glasbake marked globe; the logo on the glass is at the bottom just to the left of the frame vertical bar.

AGM’s Model 3006 (left and center) and the AGM version for Sears (right) that Sears sold as Model 710.7426. These instant lighting lanterns share the same burner assembly (center). Both lanterns have a number of steel parts; Coleman made lanterns with comparable steel parts in 1943. The original box that came with the AGM version for Sears indicates that it was made during WWII.

Matthew Reid restored his Model 3016 lantern (left), including a correct AGM mantle. The 3016 with the nickel plated fount (right) is in Bob Meyer’s collection and has an original Ready Lite globe. 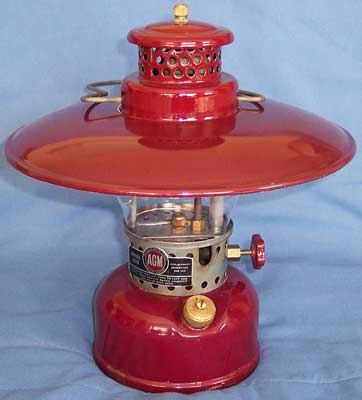 This SunFlame shade ring fits Model 3016 and has the same color enamel as the lantern. This shade ring and lantern are in Kyle Sund’s collection. The underside of the shade ring (lower image) is white enamel to increase reflectivity

This is AGM’s model 3020 lantern which burns kerosene. All original, this Sun Flame lantern is in Fred Kuntz’s collection. 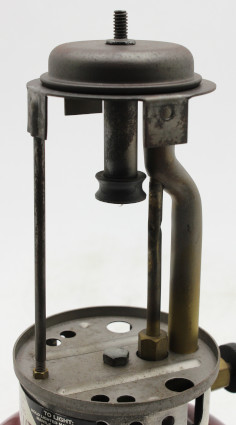 AGM Model 3025 has a polished ventilator and several parts in the pump that are aluminum. It is an instant lighting model with the cleaner tip built into the fuel valve so that it functions with every revolution of the opening and closing valve wheel. The two piece steel mixing chamber is pressed together (left image). Parts for this model appeared in a 1956 catalog.

Comparable to Coleman’s Model 236, these AGM Sun Flame Model 3026 lanterns have a large globe with a single burner. The one on the left, in Neil McRae’s collection, has a Sun Flame globe, small filler opening, maroon painted fount, and no stamping on the fount base. The one on the right, in Bill Droster’s collection, has a plain globe, large filler opening, green painted fount and is stamped with the AGM name and location on the bottom along with U.S. 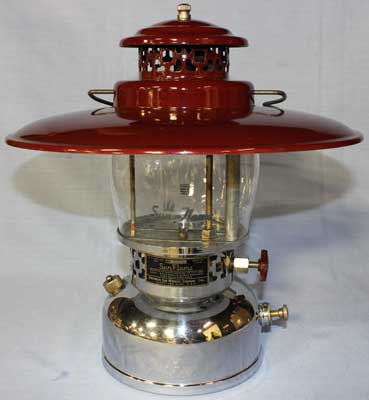 This AGM Sun Flame Model 3026 differs from the two above in having a plated metal fount and an optional Sun Flame shade ring. This lantern is in Rich Wiersum’s collection. The lantern has a Sun Flame globe and smaller filler cap as on the 3026 in the above left image.

AGM also made their Model 3026 (above) for Sears. Sears listed it in their 1942 catalog as Model 710-7402. This lantern, in John Stendahl’s collection, has a replacement globe. The nickel plated filler cap appears brassy. 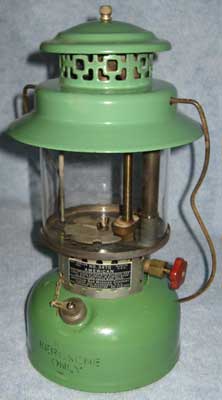 Model 3470 was a 500 cp kerosene lantern that was made for the military in the early 1940’s (left and center and in a civilian version as 3470-C (right). military version is stamped US in the base, has a wrench held in with the frame nut, and has a chain holding the filler cap. The lantern on the left is in Dave McFarlan’s collection and the lanterns in the center and on the right are in Neil McRae’s collection.

This AGM Model 2572 has a different style tag on the base rest (lower image) than the row of three 2572 lanterns higher on this page. Unlike the one finished in green in the above center of those three, this one is stamped U.S. on the bottom indicated that it was made for military use during WWII. Note the chain fastening the filler plug to the collar (upper image, right). The burner assemblies on all of these 2572 lanterns are the same as on Model 3927 below. This two mantle gasoline fueled lantern is in Agostino Del Coro’s collection. 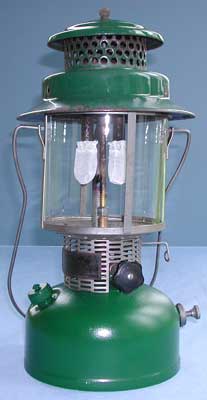 This Model 3927 is also stamped U.S. on the bottom indicating that it was made for the military during WWII. This one is unusual in having a Coleman type tip cleaner assembly. The burner assembly (right image) and repainted fount are steel as are many other parts. The globe is held in place by three tabs just above the ventilator brim. It was found at a boot sale in southern England in the mid 1990’s. This two burner white gas model is probably rated at 300 cp.

This 3927 lantern is the same as the one above except that it was made into a mil-spec lantern with an Aladdin conversion kit dated 1944 (lower image). The burner is also stamped Servel, the company that made the kit. The lantern, in Agostino Del Coro’s collection, was photographed without the ventilator or globe to show the mil-spec burner. Standardizing parts on equipment reduced the parts needed to service and maintain them.

Early production of the mil-spec lantern in 1944 by the 3 manufacturers, Akron, Coleman, and AGM (here), all lacked the parts well. Note the rounded shoulders on the upper sides of the fount with no screw cap. This unfired lantern, in Harold Ridarick’s collection, includes a burner assembly made for AGM by Aladdin.