AGM’s Model 333 appeared in a flyer circa 1913 (Neil McRae). This lantern, in Craig Seabrook’s collection, includes a cast iron globe cage and lacks a frame rest. AGM rated this large single mantle model at 400cp. The large fount holds a quart of gasoline so the lantern will run for 10-14 hours. The weight without fuel was advertised at 4 lbs. It has a reproduction mica globe by Fred Kuntz. The ventilator is not original to the lantern (McRae). 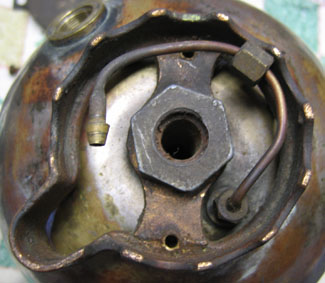 AGM’s No. 5 street lamp appears in their No. 22 catalog, circa 1917. The globe cage, burner, and ventilator are the same as on their Model 334 lantern below. The fount has a vertical steel tube that passes through the middle so that the lamp can be mounted on a pole. The collar is thick brass that includes a mounting yoke that is held in place by a hex nut. Note the circuitous fuel line that requires two extra fittings compared to the No. 5 street lamp below (lower image). This 400cp lantern is in Dwayne Hanson’s collection. 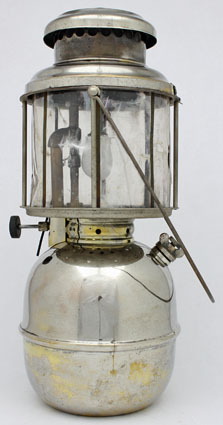 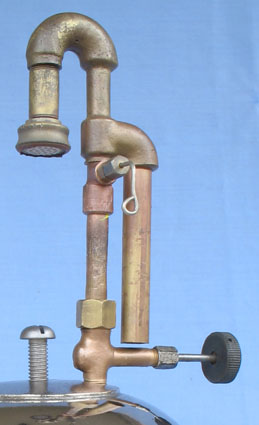 Another AGM No. 5 street lamp, this version has a shorter generator and a pressed, plated brass collar (left image) compared to the No. 5 street lamp above. The fuel line is soldered into the bottom of the valve that is threaded directly into the top of the fount (right image). This street lamp, in James “Smitty” Smith’s collection, was presumably made more recently. 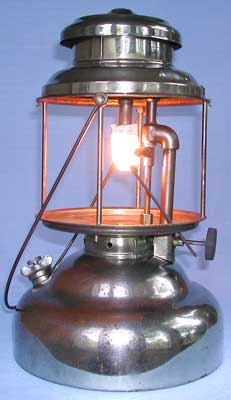 AGM’s Model 334, also appears in Catalog No. 22 circa 1917. This lantern, in James “Smitty” Smith’s collection, shares some similarities with Model 333 above but has a frame rest and a different tip cleaner arrangement. The ventilator is held on by two clips. The 8 1/4″ diameter fount was also used on some lamp and stove models of the period, and on Model 333 above. 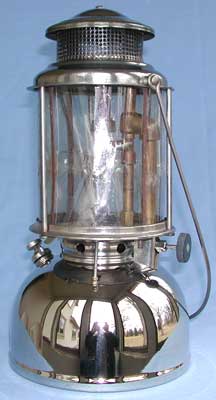 AGM’s Model 335 is a smaller fount version of Model 334 above. The globe cage is bayonet mounted to the base plate and held in place by a spring clip (just above the filler cap). This torch lighting lantern has a tip cleaner (right image). The fount on this lantern was re-nickel plated. This lantern is in George Remkus’ collection. 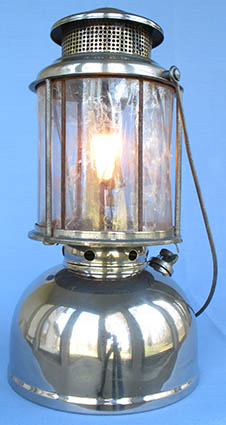 Model 445 appears in AGM Catalog 22, circa 1917 with a match lighting “instantaneous burner” center image). Except for the burner, air tube, and generator Model 445 is the same as Model 335 above. The fine tubed generator includes a tip cleaner (right image). Patent No 1040388 (center image) is for AGM generator “D”; the other side of the mixing chamber casting (not shown) is marked PAT. PENDING, presumably for this AGM “instantaneous burner” that was applied for on March 20, 1916 (McRae). This lantern is in John Rugotzke’s collection. 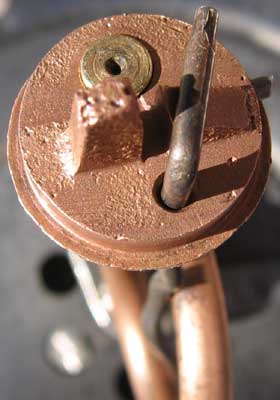 This AGM Model 1250 lantern is superficially like the single mantle Model 335 above; the lantern is only marked PAT APL’D FOR on the burner. Dwayne Hanson restored this match generating lantern which is in his collection. The generator opens into the burner chamber through a plug (right). The rod, which originally had a tip cleaner, can be worked by turning the wire below the globe cage (left and center). AGM also made a Model 1200 lamp with this same construction. 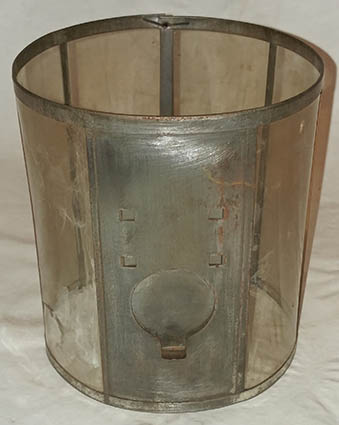 This unmarked and undocumented lantern was probably made for a short period by AGM following production of Model 1250 above. It lacks the cumbersome tip cleaner of the 1250 and has a cap in the bottom of the mixing chamber casting with a hole in the center to receive the generator orifice. AGM used a coil match lighting generator comparable to Coleman’s Q99 and a mica globe with sliding door (lower image) comparable to Coleman’s 323 globe. This lantern is in John Rugotzke’s collection. 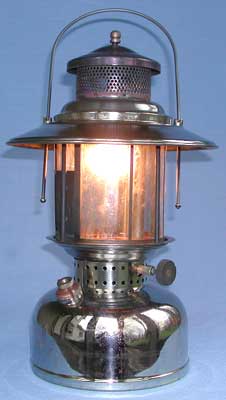 AGM lantern Models 57 (left), and 58 (right), appear in AGM catalog 27, circa 1923. These  single mantled models have early mica globes with brass frames and single finger latches at the bottom of the door. Model 58 differs from 57 in having a wide ventilator with retractable handle. Both of these lantern are in James “Smitty” Smith’s collection. 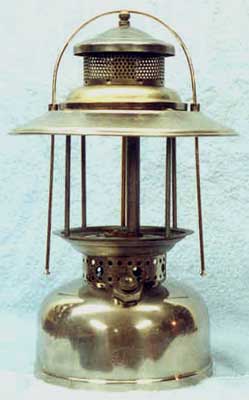 AGM Models 257 (left), and 258 (right), are two mantle lanterns that appear in Catalog 31, circa 1927. Model 257, in Loren Abernathy’s collection, has a reproduction mica globe made by Fred Kuntz. Like Model 58 above, Model 258 features a bail that slides down through the wide ventilator shade when not in use. This is a wide ventilator version of the two burner Model 257 above and is in Craig Seabrook’s collection. These two models have the Ready Lite burner as on Models 267 & 268 below. 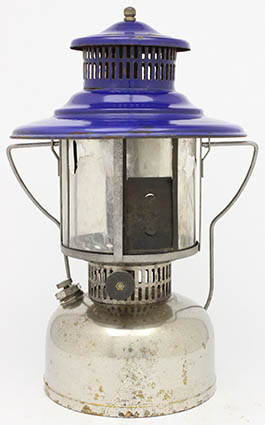 AGM Models 267 (left & center) and 268 (right) are double mantle Ready Lite models and require preheating the generator with matches. AGM received a patent for the Ready Lite burner in 1926 (center image). The volatilized fuel-air mix flows upward through a small central tube from the generator and flows down to the burner caps and mantles getting thoroughly mixed in the process as described in the patent. The globes are original; the frames on the globes are brass and fastened with large head fasteners, that are common on AGM lanterns. 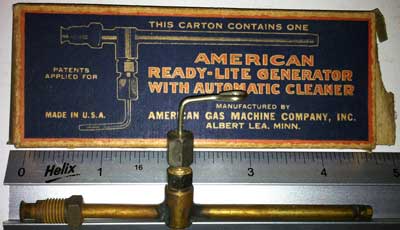 AGM made several generators for match lighting appliances, most of which took a separate pricker to unplug the orifice if clogged. This new-old-stock L109 generator, in Dan Martin’s collection, came with a built-in tip cleaner/pricker similar to Coleman’s R55 generator. Dan recovered this generator from the unsold merchandise in a drug store that had been in his family for several generations. 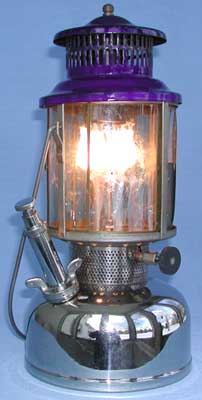 Models 277 (left) & 278 (right) only differ from Models 267 & 268 above in having built-on pumps. These two lanterns, in Bo Keller’s collection, came with straight AGM L35 generators, comparable to the Coleman Q77, and require preheating with a match. The globes are AGM with brass frames and large head fasteners as above. I have an ad from a 1926 magazine that pictures Model 278. 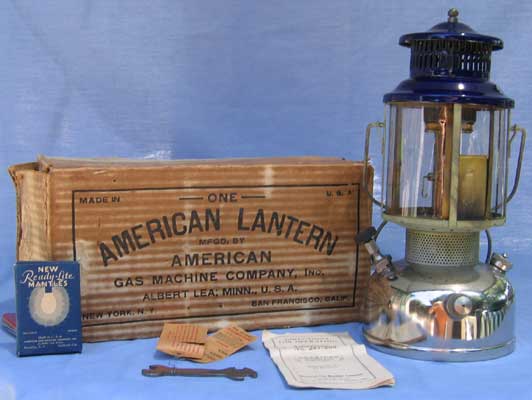 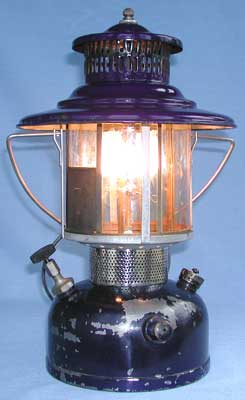 Models 287 (above) & 288 (below) are another pair of double mantle lanterns by AGM. They are distinguished by a “carburetor valve” that projects into the fount. A needle valve at the bottom of the fuel line controls the flow of air & fuel from the valve through fine tubing into the base of the generator making this an “instant lite” lantern. These lanterns have AGM brass framed mica globes with the two “crescent” finger holds; the founts are steel. The unfired 287 lantern (above) is in Dwayne Hanson’s collection. 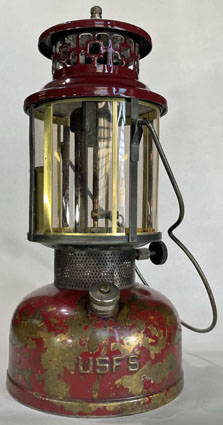 This AGM lantern has USFS embossed on the fount (upper left image). It differs from most AGM lanterns made for the USFS in having a Ready Lite burner as on Model 267 above, rather than the burner (upper right image) as on an AGM-USFS lantern in George Remkus’ collection. We believe the initials and dates scratched on the bottom (lower image) were inscribed to show when maintenance was performed on the lanterns by USFS personnel. The lantern in the upper left and lower images is in Bill Whitten’s collection. 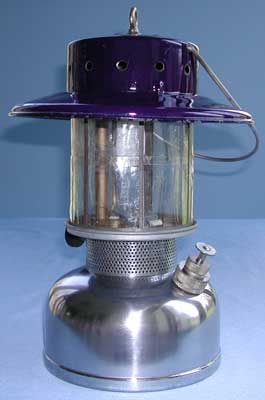 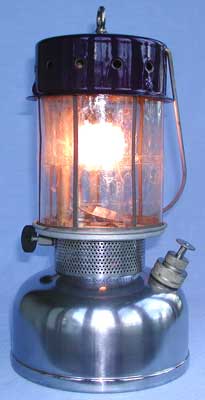 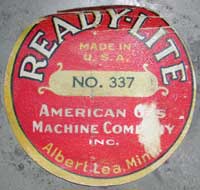 AGM introduced Model 337 in 1931. A low cost model, the metal below the globe cage was cadmium plated steel. Here the fount, which had rusted, has been buffed back to the steel. The mica globe pushes up inside the ventilator to preheat and light the single mantle. The paper label on the fount bottom (below) is often missing off the early AGM models. The L344 shade ring is a detachable option (above left). This lantern is in George Remkus’ collection. 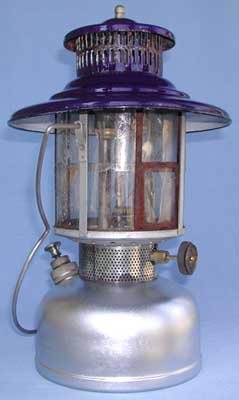 A two burner, instant light lantern, Model 304 has a steel fount that was nickel plated. It has an L38 burner, an L510 generator with a built-in tip cleaner, and lighting directions on a tag on the valve wheel. AGM parts catalogs refer to this as a 1933 Model. The fount on this lantern had rusted badly so is painted silver and cannot be run. 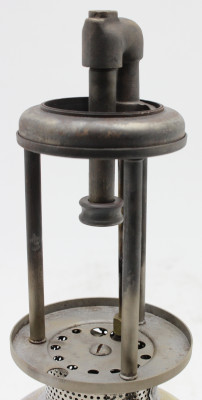 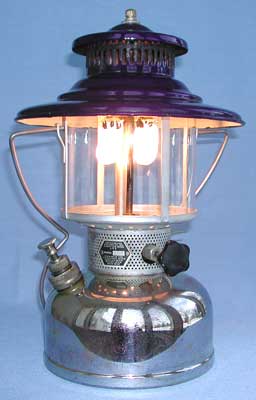 The  single mantle Model 100 (upper) and double mantle Model 101 (lower left-new image), and 102 (lower right) were referred to in AGM parts catalogs as 1934-35 models. All are instant lighting. Model 100 (upper right) has an unusual circular air chamber above the three air intake tubes. The founts on these instant lighting models are nickel plated with built-in pumps, and were supplied with mica globes (above), or glass (lower right). Model 102 is in Jim Dencker’s collection. 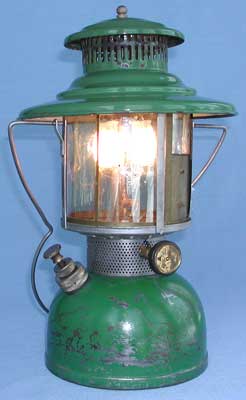 AGM made this lantern for Sears; Sears sold it in their 1931 and 1932 fall catalogs as Model 4618 1/4. It is only stamped MADE IN USA on the bottom of the fount. This two burner, instant lighting model has the same burner (right image) as the 101-102 models above, but a simpler instant lite valve assembly design as on Model 304 above.