Coleman appliances made in countries other than the US and Canada
are included in the Coleman Canada pages on the website.

Coleman Canada Model LQ, dates to the early 20’s. The center base plate is stamped “Coleman Quick-Lite Made in Toronto, Canada.” The collar is also marked Quick-Lite, not Air-O-Lantern as on the Wichita, USA, QL version of this model. The mica globe was removed for the image.

The only date record we have for the E20 poultry lantern is from a 1924 catalog. This lantern, in Michael Merz’s collection, requires a separate pump and includes a pressure gauge. The stenciling says Coleman Quick-Lite and Jumbo Lantern. This lantern has a 323 mica globe. 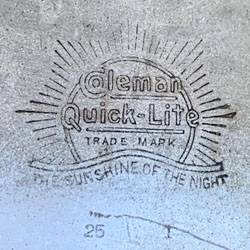 The Coleman Company in Canada made this L427 Quick-Lite lantern in April, 1927. The early L427s had “built-on” pumps. This lantern has an original Q99 generator and a new-old-stock (NOS) #327 13 piece mica globe. This lantern is in George Rocen’s collection.

By August, 1927, four months after the L427 above was made, Coleman – Toronto had changed to a built-in pump. The filler cap no longer had 12 ridges for gripping as on the L427 above but only the two tabs. This lantern is in Agostino Del Coro’s collection.

The first instant light lantern models were 220 (seen here) and 228 (below). As on Quick-Lites of the period, Model 220 had a detent in the bail attachment (“D” in the right image) to hold the bail upright. This lantern, in Bob Johnson’s collection, is dated July 1929.

Model 228 used the same bail attachment as Model 220 above and also has detents to hold the bail upright. These first instant light models had valve bodies and generators mounted at a slant; the mixing chamber was cast to receive the slanted generator (right image). This lantern, in Agostino Del Coro’s collection, is dated September, 1929.

This Model 327, in Bob Johnson’s collection, is dated October 1929. It has several features that are typical of the period including bail detents as on Model 220 above, the baffle plate is stamped Coleman Quick-Lite, Made in Toronto Canada, and the Bakelite valve wheel has 12 ridges for gripping. This lantern and the one above lack the usual cut-out
for the filler cap in the frame base plate.

Coleman Canada made this L427 QuickLite in March, 1930. This lantern, in Matthew Reid’s collection, has a simple fuel pickup, but uses the fount and collar as on the 220A below. The fuel valve is unique to this style L427. The frame and burner are the same as on other L427 lanterns. Please contact me if you have one of these lanterns. 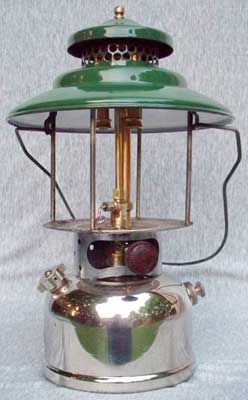 Coleman Canada made these lanterns in September, 1930 (left & center) and June, 1929 (right). They appear to be Canadian Models 220A and 228A based on a comparison to a 1934 parts catalog. Coleman used the collars and frames from the 220 slant generator model but the collars are not fully formed to accept the earlier slant valves. Note the access to the tip cleaner, not found on Model 220, is through the frame base plate. The 220A is in Matthew Reid’s collection and the 228A is in Steve Redmile’s collection. If you have one of these lanterns, please contact me.

The first Coleman Canada 220B (left) & 228B Models (right) had the brass founts finished in green Colac paint which is usually associated with several lamp models. These two lanterns are dated May 1931. The base rest on these models is only stamped “Coleman” using holes. The 220B on the left is in Alex Fabiszewski’s collection and the 228B is in a Coleman Museum in Sugarcreek, Ohio. The paint on this fount was restored by a previous owner.

This Quick-Lite Model 227 is date stamped 4 3. Mike Ogilvie, whose collection this is in, has another with the same date stamping and also without two digits for the year. I believe it is April, 1933, based on when the same model was made in Wichita (1927-1932). This lantern lacks the indents in the vent and the attached ball nut that are found on some US made 227’s.

Coleman also made a kerosene fueled version of the 242, Model 242K, for a couple of years in the mid 1930’s. The preheater cup is cast aluminum, one of the earliest uses of this metal in a lantern or lamp, and the cleaner tip valve is a wheel rather than a bent wire. The lantern on the left is dated March 1935 and on the right, July, ’35. These Canadian lanterns are in George Rocen’s collection.

This Model 2242 lantern was made by Coleman’s subsidiary in England circa 1934. The lantern has many parts as found on Model 242K. which was made at the Toronto factory in the same period. This model lacks a preheater cup; preheating was done with an alcohol soaked torch as described in the instruction sheet for this model (McRae). This lantern is in Jean Jessiman’s collection.

This LK427 kerosene lantern was also made in the mid 1930s in England and was preheated with a spirit (alcohol) torch as Model 2242 above. This lantern is in Michael Merz’ collection.

Coleman Canada Model 427K, the “Mountie,” is a kerosene fueled Quick-Lite from the 1930’s and early ’40’s. Note the preheater cup. It can also be run on gasoline but requires preheating with a match. This lantern, in Agostino Del Coro’s collection, is date stamped April, 1936.

By the last quarter of 1939, Model 427K had changed in several ways: the base rest is no longer stamped Coleman Quick-Lite in holes, the ventilator has light green enamel and the valve wheel has 12 ridges around the edge for gripping. The lantern with the box is in Agostino Del Coro’s collection.

Agostino Del Coro identified this kerosene fueled 327K dated August, 1937, by the restrictor in the mixing tube below the burner casting as well as the preheater cup on the R55 generator. Note the light green enameled ventilator that was used in this period.
As other Canadian Quick-lites made in the later 1930’s and early 1940’s This lantern only has a row of holes around the top and bottom of the base rest. 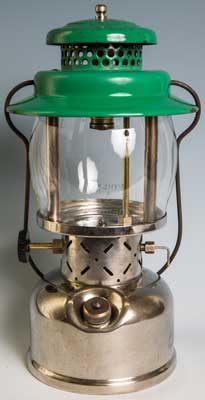 The Coleman factory in Toronto, Canada, made this Model 236 which is dated A (we believe stands for Jan.-Mar.) 1938; the earliest 236 lantern of which I am aware. Before WWII this model was made with a light green enameled ventilator and a nickel plated brass sided fount as seen here. This 500 cp gasoline model is in Mark Strachan’s collection. 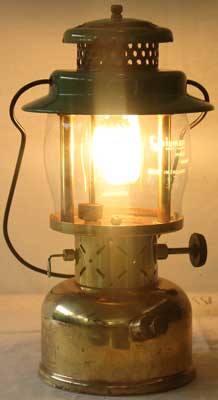 This Model 237 is date stamped A (Jan – Mar?) 1938, the earliest date we have found on this model. Model 237 replaced US Models 223B & 223BW per the 1937 Coleman Canada Export Catalog. This 500 cp kerosene lantern, in Peter Cunnington’s collection, has the same pale green enameled ventilator and originally nickel plated fount as above.

Model 249 was first made in the late 1930’s This 249, in Malcolm West’s collection, is date stamped C 1938. It has a cast aluminum preheater cup that was also used on other kerosene fueled models. If you have an earlier stamped 249 please contact me. 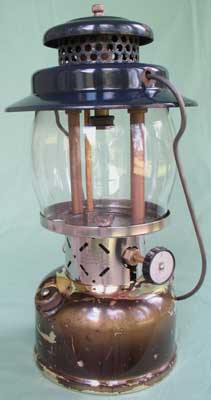 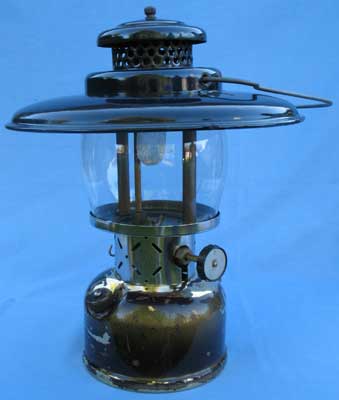 This unusual Model 236 is dated C (July-Sept?) 1939. The ventilator above is dark blue, not pale green, and the brass fount is painted brown with gold accents, as were some lamp models produced in the Toronto factory in this period. The optional reflector (right) is the same dark blue color as the ventilator and is marked “Coleman, Made in Canada.” This lantern is in Roland Chevalier’s collection. Please contact me if you find a Coleman Canada lantern finished this way.

This Coleman 220 B lantern was made in Canada and is dated A ’40. Craig Seabrook has had the ventilator re-porcelainized to the original lighter green color seen on several of the Canadian lantern models. The globe cage and bail were nickel plated.

Neil McRae thinks this Coleman lantern may be Model 238A based on the presence of the rapid preheater, which is controlled by the wheel in the collar (left image). This exported lantern, in Deon Bouwer’s collection, is dated B 41 (April-June, 1941) and, like Models 239A and 240 below, is likely a 500cp model. These models are kerosene fueled. 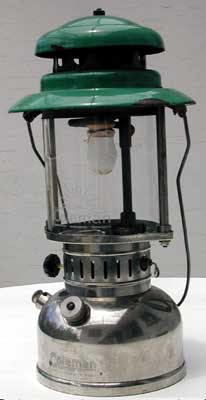 Neil McRae believes the above lantern is Model 239A. This lantern, in Graeme Cameron’s collection, was made in Canada and is date stamped A 1940. It is identical to Model 238A above but lacks the rapid preheater. Please contact me if you have a 238A, 239A or 240 Model Coleman as we are continuing to gather information on these models.

Neil McRae believes the above lantern, in his collection, is Model 240. It was made in Canada and is date stamped A 1940. This model was likely an economy model as it has no valve, only a tip cleaner lever, and the pump is the simple European type without the usual Coleman positive shut-off. Pressure is added with the pump and released at the filler cap. It has an alcohol preheater. The ventilator was probably green enamel originally. 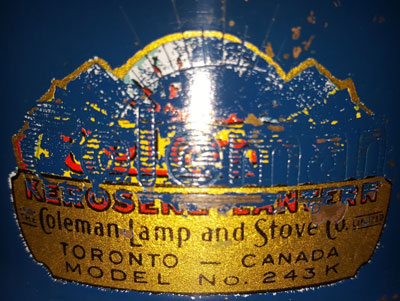 Coleman Canada made this 243K for export Unlike other 243 lanterns made in this period, all in Wichita, Kansas, this kerosene model has a brass mixing chamber and unique multicolored decal (lower image). This lantern, in Thys Saayman’s collection, is dated A 41. Please contact me if you have Model 243K lantern.

Coleman – Toronto continued to make Quick-Lite lantern model 327, into the 1940s; this one, in Doug Dwyer’s collection, is dated C (July-Sept), 1943. It is stamped Model 327 on the bottom with black ink. This model would have been inexpensive as it is not Instant Lite, has a mica globe, and requires a separate pump. The fount is brass, surprising in wartime.

Coleman in Toronto, Canada, made this 242B in D ’45, which we interpret to be Oct-Dec of that year. The shade is stamped “Made in Canada” and “Coleman.” This lantern is in Will Nelle’s collection.