This kerosene fueled Model 249 is date stamped A (that we believe means Jan-Mar) 1946. This lantern, in Tony Webber’s collection, has the brass fount finished in light green paint due to a lack of nickel at the end of WWII.

This Coleman Canada Model 242B lantern, date stamped February 1948, is unusual because of the brown enameled ventilator. This lantern, in Michel Binard’s collection, has the lighting instructions stamped in the collar in 3 languages.

Coleman initially made the kerosene fueled Col-Max models in the US beginning in 1939-40, then switched production to the Canadian plant and later to Hong Kong, where they were made until 1970. Col-Max models were exported to compete with Petromax style lanterns. Model 333 is a 300 cp model. The one on the left, running, is date stamped November, 1950 and Made In Canada. This lantern is in Erwin Schäfer’s collection. The Model 333 on the right is undated and was made in Hong Kong. It was in the late Jerry Engbring’s collection.

Beginning in February, 1951, the Toronto factory began producing their Model 200 lantern. For 8 years they made them with nickel plated brass founts before switching to red painted brass founts. As on other models of the period they embossed the collar with the model number (lower image). For the first year of production (in February and November) they identified the generator as No. 242-299 then changed it to T-66. This 2 51 dated lantern is in Agostino Del Coro’s collection.

Model 238B was made for export; the directions on the collar are only in Dutch and French. This 500 cp kerosene fueled model has a preheater torch and alcohol cup. The generator is ribbed, the burner tip is ceramic, & the ventilator is aluminum. The round glass globe was removed for the image. This lantern, in Bob Frank’s collection, is dated April ’52.

This Toronto made 237 is in Chad Wise’s collection. Coleman Canada used this fount stamp design (lower image) for a number of years. The small month number, 10, here in the lower left corner of the stamp, and small two digit year number, 53, in the lower right corner were used in this style by the Toronto factory beginning in 1925. This 500 cp kerosene model was popular in Canada after WWII until 1970.

This Coleman 242B was made in Australia (lower image) in July 1950. The mixing chamber casting has three flat disks (upper right image) that may have served as datum targets. The nut fastening the frame to the valve body has a rounded and threaded top. The brass generator is stamped Coleman, Made in Canada (not shown). This lantern is in Marty Edwards’ collection.

Kerosene Model 249 – (l-r): Made in Australia by arrangement with Coleman Lamp & Stove Co. Ltd. Canada, date stamped Sept. 1953, and has a globe marked Colex. The second lantern is stamped Made in England and is date stamped May 1954. This lantern, in Doron Papo’s collection, was perhaps at most assembled in England but made in Canada. The third lantern is date stamped Apr. 1959 and was probably made in Toronto but is not marked. The first and third lanterns are in Rob Roberts’ collection.

The Toronto factory first made the 243B circa 1950. Most of the ones made in the 50s were exported. This one was found in Switzerland and is date stamped August, 1954. The base plate (lower image) is stamped E. Schatz, a reseller in Zug (Switzerland), and is numbered K1137. The bail is rounded at the tops to fit into the mixing chamber casting as on other models of this period. This lantern is in Jack Martini’s collection. You can see a later 243B below and here. 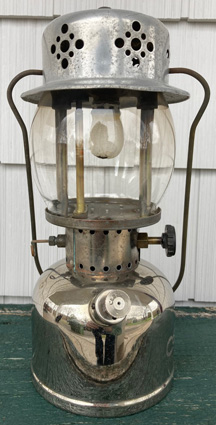 This Canadian made 243B is dated February 1961. The decal in German on the side of the fount below the filler plug (lower image) was reportedly applied by the Swiss Army. In English it says: Only for unleaded petrol! Use in residential and fire-endangered areas is prohibited. This lantern is in Alex Walsh’s collection.

Models 246 and 246B were made in Wichita for a number of years before this 246B was made by Coleman in Toronto in January 1955. These two models were export versions of Model 242B. An unusual difference in this Canadian made lantern, in Pablo Vega’s collection, is the cast aluminum (not brass) burner. 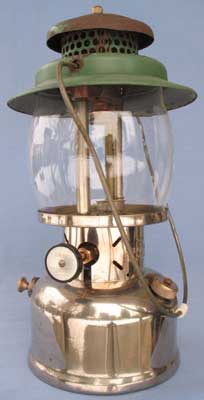 Another Coleman 237 lantern, this one is date stamped August 1958 (lower image). In addition to the familiar Sunshine logo and Coleman in large letters stamped on the side of the fount, it is also stamped Industria Brasileira (Portuguese – Brazilian Industry) between the date numbers. This lantern, in Mike Merz’s collection, appears to have been made entirely in Brazil and was likely made under license from Coleman. 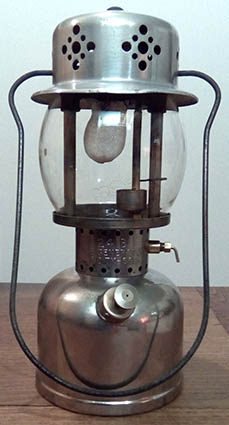 These kerosene fueled 241 lanterns were economy models primarily exported from the late 1940s until production ended in 1968. There is no valve (lower image) which reduces the cost. Instead, once the generator is preheated, the user pumps air into the fount after closing the air screw on the filler plug. The user opens the air screw to shut off the light. Model 241A, in Michael Merz’s collection, is dated Jan 1950 (upper left) and Model 241B, in Tony Webber’s collection is dated Mar 1959 (upper right and lower).

Coleman in Canada made the Model 247 for consumers (upper left) and Model 247R for the Canadian Pacific Railway (CPR) (upper right and lower). The 247 on the upper left is in Craig Seabrook’s collection and is dated April 1948 while the one on the upper right and lower left is in Joshua Capp’s collection and is dated September 1963. Note that later 247 lanterns had a “squared off’ bail rather than “rounded.” The 247R on the lower right, in Matthew Reid’s collection, is date stamped May, ’51, and includes the railroad’s wall mounting bracket, to minimize shaking. There are crossed spring clips to the fount base and two springs to a bracket on the frame base plate. Two of these lanterns were mounted in each caboose beginning in the late ’40’s and continuing to the ’60’s.

This 236 Coleman was made under license in Mexico, possibly by Industrias Kolmex. The valve wheel, which may be a replacement, is marked Servi-Col; a company that makes blow torches (Occelli). This lantern, in Mike Sine’s collection, is date stamped November 1963 (lower image).

Later versions of export model 241 include 241G, dated Aug 1962, and 241K, dated Jun 1968. The founts are no longer nickel plated but finished with a metallic light green paint. These later versions can be compared to earlier versions higher on this page. The pump on Models 241 – 241G lacks a positive shutoff, another cost-saving feature that was safer with kerosene. Model 241K has a pump with a positive shutoff to prevent kerosene from escaping under pressure through the pump well. Model 241G is in the DeGroff collection and Model 241K is in Michael Merz’s collection.

Model 243B was initially made in the 1950’s for export by Coleman Canada but by the 1960’s this model appeared frequently in Canada. This lantern, in Mike Ogilvie’s collection, is date stamped October 1965, much later than the US versions of the 243 that date to the 1930’s – 40’s. 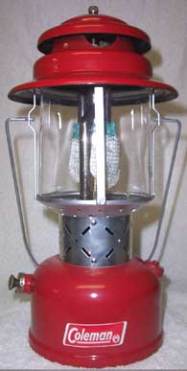 The Canadian Coleman company finished their 220E lantern in red. This lantern, dated Nov. ’65, is in Matt Reid’s collection. He restored it by bead blasting the globe cage and painting it with 1200 degree F silver paint. the sticker is original and the mantles are from the period of manufacture.

Coleman Canada made Model 242D for export. This lantern, in Brent Zier’s collection, is date stamped Aug. 1966. This model has also been found with an Apr. 1967 date stamp. The ventilator ball nut and bail appear to be the same as for Canadian 200 lanterns of the period.

This Canadian 236 is date stamped Aug 1967 and came with the box which identifies it as (Canadian) Ministry of Forests and Lands. The lantern is stenciled FS with the number from the box written in marking paint after the FS (not visible here). This lantern is in Jim McGuire’s collection.

The collar on this April 1966 dated lantern is only embossed 249 but it has features of Model 249D that was introduced this year (see below). The lantern may have been made to use up parts from Model 249 production including the top nut and ventilator, however, it does have the bail as on Model 249D. The valve wheel has a central flattened area as on a 249D but lacks the screw to hold the knob on the stem as on that model. This lantern is in Logan Bourdon’s collection.

Kerosene fueled Model 249D had a new top nut and ventilator as on the 242D above. It also has a screw holding the valve wheel (compare to the 249 above). This short-lived model was made from early 1966 until late 1967. This 249D, in Steve Potter’s collection, is date stamped September 1967. 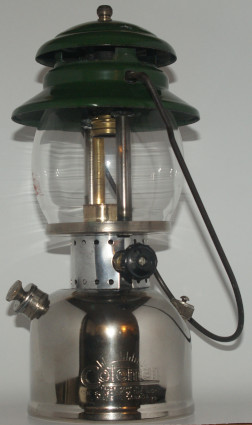 Model 249E was the last of the model series; production ended by mid 1970. The E version differed from the D version above in having a short ventilator and mounting stud and the valve wheel is countersunk to receive the screw to  fasten it to the valve stem. This lantern, dated February, 1970, is in Mark Thane’s collection. Model 200A (image below right), also had a short ventilator.

Coleman-Toronto made Model 200 (left and center) much longer than the 200 model was made in the US. The lantern on the left is undated but was made between Nov 1966-Dec 1967; it is in Monte Dodge’s collection. Note the decal is under the tip cleaner lever. Model 200 date stamped Feb. 1964 (middle) is in Matthew Reid’s collection. Canadian Model 200A, date stamped May 1969 (right), in Ken Laramee’s collection, has a short ventilator as on the 249E above and was similarly produced in the late 1960’s until mid-1970.

Model 242E was the last in the Canadian 242 series. Production was from September 1966 until early 1970. It is much the same as Model 242D, above, except with a lower profile ventilator and the valve wheel is held with a recessed screw. This lantern, in Pablo Vegas’s collection, is dated Feb. 1970. 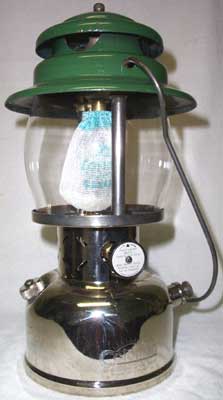 Coleman changed the ventilator design on the 236 in the late 1950’s. The one on the left, in Matthew Reid’s collection is dated Dec. ’62. The pump is held with a metal clip, rather than two small screws. Coleman made Model 236A (right) in the late 1960’s and in the first months of 1970. Model 236A, dated April, 1970, in Agostino Del Coro’s collection, differs from Model 236 in having an aluminum collar and in the shape of the bail.

The last month that Coleman made Model 247R embossed for the CPR was May, 1970. In that month this model was made with both the earlier, taller vent (left image), in Agostino Del Coro’s collection, and the later, shorter vent (right image), in Ken Laramee’s collection. These lanterns were used for a variety of lighting purposes, not mounted in the caboose. Models 247 and 247R were replaced by Model 639. The lantern on the right has a replacement valve wheel.