The Canadian version of the 220F was not produced in large numbers. The Canadian version has several differences from the US version above including the “dot-dash” collar and the ventilator air vents. This lantern, dated Feb. ’71, was in Matt Reid’s collection. His restoration included bead blasting the globe cage and repainting with silver paint, repainting the fount, and applying a reproduction sticker.

Coleman Toronto made their Model 335 in red in June, 1970 as this lantern, in Matthew Reid’s collection. This lantern came with the box which is also printed in red, rather than the usual green for this model. The globe is marked Coleman, Colex (with the sunshine logo), No. 4, Made in England. 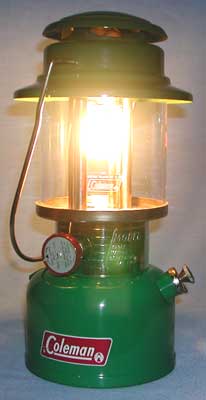 Many Model 335 lanterns finished in green were produced in the 1970’s by Coleman Toronto. This lantern is date stamped November, 1970. This model replaced the popular Model 200 and was rated at 350 cp. 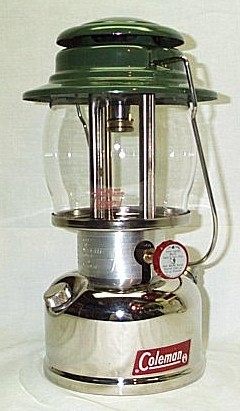 A common Canadian Coleman model is the 635. This one is unusual because it has a nickel plated fount rather than the usual green paint. The 635 burns white gas and is rated at 500 cp. This lantern is in George Rocen’s collection; the fount is dated Feb. ’72.

Canadian Model 321 Deluxe Quick-Lite was the first Coleman model to use a Schrader valve (image below – 5 with spring) to control the fuel/air flow to the generator. This earliest lantern in the 321 series, date stamped March 1973, is in Matthew Reid’s collection. 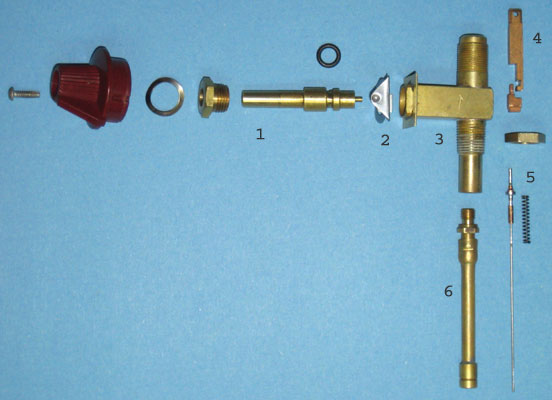 When the valve in the above lantern is partially opened (1), the eccentric block (4) is raised causing the generator orifice to be cleaned; further opening of the valve now pushes the block beneath the eccentric down from the force of the spring (5) in the Schrader valve that is contained in the fuel air tube (6). The Schrader valve wire is reduced in diameter near the bottom (not visible here) to allow varying amounts of fuel past according to the valve’s position. The valve is restricted to a 270 degree turn by (2); the valve body (3) is held in place on the fount by the nut above (5). 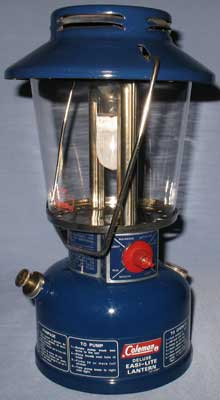 Model 621 Easi-Lite lantern is a 550 cp model. This one, in Roland Chevalier’s collection, is dated Jan ’74 as is the Model 321 above. However, this lantern has a different fuel feed system that includes a redesigned central fuel rod and larger Schrader valve to control the fuel rod (Chevalier & Dyke). 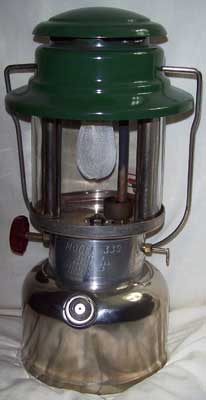 Model 339 was a 350 cp lantern model comparable to Model 335 above but kerosene fueled. The lantern on the left, in Don Colston’s collection, is date stamped January 1975. The height of the lip on the frame base plate was reduced by January ’89 when the 339 on the right was made. This lantern is in Roland Chevalier’s collection.

This Easi-Lite lantern Model 331 was made in the late 1970’s. This 350 cp single mantle lantern exhausts heated air between the top of the globe and the underside of the ventilator, which lacks the usual holes in the cap. Brackets on the underside of the vent keep the globe in place as well as providing the exhaust space. This lantern, in John Garry’s collection, is date stamped Jan ’78. 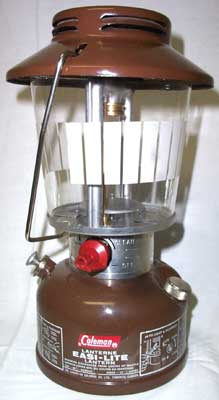 Easi-Lite Coleman Models 621A (left) dated Jan. 1976, 621B (center) dated Feb. 1978, and another 621B in blue that is also dated Feb. 1978 (right). These Canadian models have a single mantle, use white gas, and are rated at 550 cp. The globe on the lantern on the left is a replacement. The lantern in the center is in Matt Reid’s collection and the one on the right is in Ling Miao’s collection. 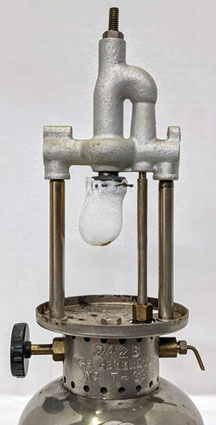 This Model 242B lantern was built under license from Coleman by Industrias Kolmex S.A., Mexico City, Mexico. This lantern is embossed with the Coleman model number on the collar and is stamped M.I.R., Hecho en Mexico under the Sunshine logo on the fount. The filler plug has a 3/4″ hex top (left image). The mixing chamber casting is aluminum (right image). This lantern is in Toby Garner’s collection. Industrias Kolmex also made a Coleman branded propane lantern.

This lantern, also in the 236 style, was made by Flamic, a branch company of Industrias Kolmex. The globe is marked Flamineta, a Mexican company that succeeded Industrias Kolmex, that still makes commercial LP appliances, globes, and mantles. This lantern is in Leonardo Occelli’s collection.

UK collector Sean McGee owns these 335P lanterns date stamped June, 1971 (left) and February, 1978 (right). Model 335P was the plated fount version of Model 335 and apparently produced for export. The frame base plates (lower images) were also used on 321 series lanterns; all have the reduced lip on the frame base plate after the mid-1970’s. 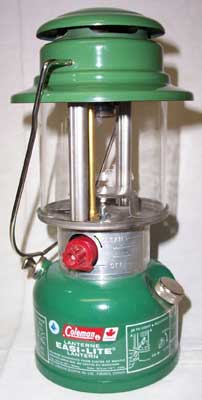 Canadian Coleman Model 321 – here the B version (left) dated Feb. 1979, and the C version (right) dated Jan. 1983. The difference in these versions is in the fuel valve assemblies. These lanterns are in Matthew Reid’s collection.

In the 1980s Canada’s National Defense bought Coleman 621D lanterns and metal cases for military use. This 621D, in Agostino Del Coro’s collection, is date stamped January 1983. This 550 cp rated model uses an O-ring to regulate the fuel air mix to the burner assembly. There is a heat shield above the frame base plate. 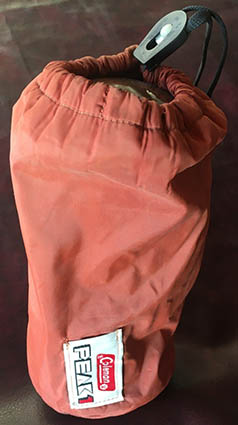 Coleman further simplified the fuel-air delivery system from a Schrader valve (higher on this page) to a fluorosilicone O-ring. The O-ring to the left of the letter A accomplishes this while the O-ring above the A keeps fuel from leaking past the valve. As O-rings wear with time, they need to be periodically replaced. These parts are in a Model 222 dated January 1982. 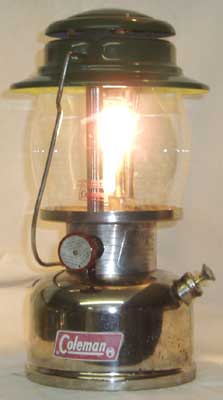 Canadian Coleman Model 639, kerosene fueled and rated at 500 cp, was made for the the public (upper) and the Canadian Pacific Railway (lower). The nickel plated fount version (upper left), dated Feb. ’71, is in Monte Dodge’s collection. The more common green painted fount version (upper right), dated Jan. 76, is in Matthew Reid’s collection. The lantern on the lower left, in Mike Ogilvies collection, is dated Jan. ’78 and has never been used. The lantern on the lower right, in George Rocen’s collection, is dated Feb. ’82 and has never been used. Model 639 replaced the earlier Model 237. 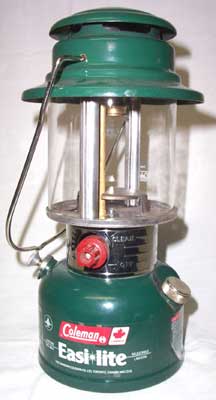 The Canadian Coleman model series 325 (left) and 325A (right) was a successor to the 321 series. These two models differ in fuel valve knobs and their internal assemblies as well as color. The 325 is dated Jan. 1987 and the 325A is dated Jan. 1988. The two lanterns are in Matthew Reid’s collection.