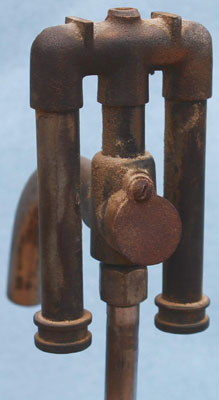 Coleman made this lamp model 118 for their Yale Light Co., Chicago, Illinois. The lamp appears in the 1916 Yale Light Catalog 36. This was the last year for Yale to feature torch lighting appliances. The mixing chamber (right image) is the same as used by Yale Mfg. prior to Coleman ownership, but with two ridges across the top to support the shade holder. This lamp with original shade is in John Anderson’s collection.

Coleman made the No. 3 torch lighting lamp in 1916-17 (Vantiger). This “Improved Coleman Reading Lamp” was not made in quantity in part because production was changing to match lighting models including the CQ. The burner is held in place by a screw that is tightened in a groove on the orifice (2nd & 3rd images from top). The shade holder is fastened by a strap across the mixing chamber casting (4th image from top). This lamp, in a private collection, includes a No. 74 shade that is correct for this model. 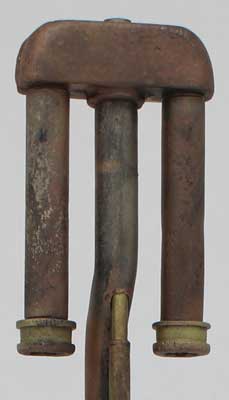 This early CQ lamp, in Jerry Engbring’s collection, was made between 1917 and 1919 when the first patent was marked on the air tube. The only markings on this lamp are on the fiber handle cap and side (middle lower image). Other early features include the rounded edge fiber handle cap (middle upper image), 4 5/8″ tall fiber handle, plated steel finishing shell above the fount, and soldered hex nut for the fuel tube on the fount bottom (lower image). 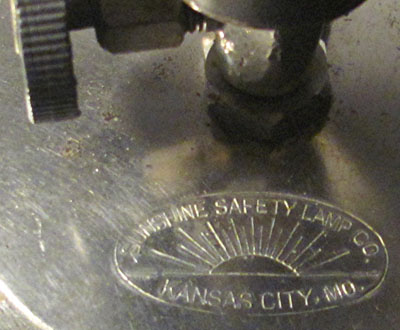 Coleman made this Model A lamp for the Sunshine Safety Lamp Co., Kansas City, Missouri, in the mid-teens before the company was owned by Coleman (bottom image). It was converted to match lighting so is now Model AQ. The conversion was done with an early Q burner that lacks any patent stamping on the back of the air tube. Note the “dimples” on either side of the front face of the mixing chamber casting (upper right image) that may have been used to center the casting in a jig for machining. This lamp is in Ron Becker’s collection. 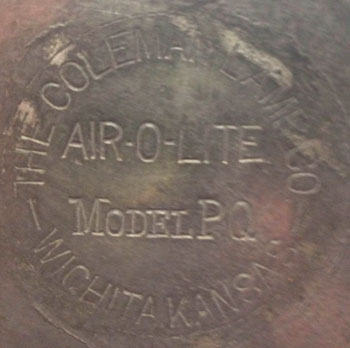 This early PQ chandelier lamp lacks patent dates on the air tubes, has early style burner caps, and valve wheels only marked with Close and arrows. The fount bottom (lower image) is unusual because it is stamped. Kameron Bissell, whose collection this is in, notes the stem sleeve lacks a seam as found on other PQ lamps. 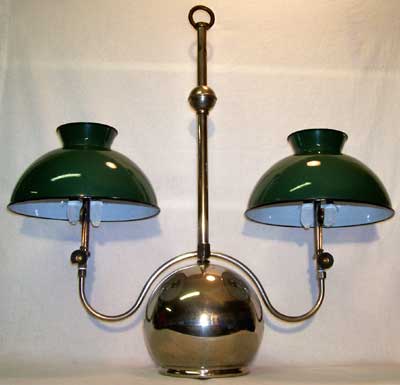 Coleman made their Model PQ for 13 years beginning in 1919. This lamp is reported to have been used in a railroad station in southern Ontario which could explain why it came with #334 Coleman metal shades which are not often seen on this model. This lamp is in Glenn Knapke’s collection. 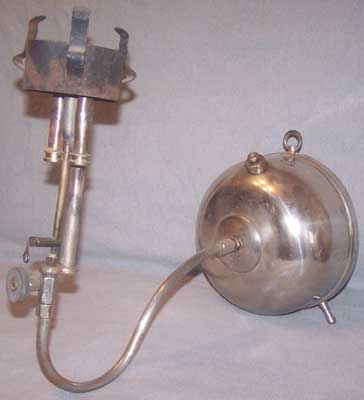 Coleman probably made this bracket lamp, Model PBQ, around 1918 (Vantiger). This lamp, in Mel Taylor’s collection, has a smaller 7″ diameter fount, a cast hanger/eye bolt, and a Q70 burner assembly that lacks a patent date on the air tube. It also has the older style burner caps that lack a taper on the lower half where the mantles are tied on.

Coleman made the Model AQ around 1918-1920. This one, in Fil Graff’s collection, has a 318 Coleman shade that was made later. This model has the fuel valve above the handle and a Q70 Quick-Lite burner; the fuel filler cap is under the bell cover.

An alcohol torch preheater was supplied with lamps as the above as well as with lighting systems and street lamps. The torch soaked in the alcohol in the bottle and was applied to the stem of the lamp below the mantles where it was allowed to burn down to preheat the lamp for running. This is in John Carriere’s collection.

This is the CQ 329 table lamp with small bug screens. The Coleman company denoted the model with the shade number in sales brochures. This was the CQ gasoline lamp with a 329 shade. The “Protect-a-lite” screens were made to prevent flying insects that were drawn to the light from breaking the mantles. This lamp is in the collection of Dwayne Hanson. 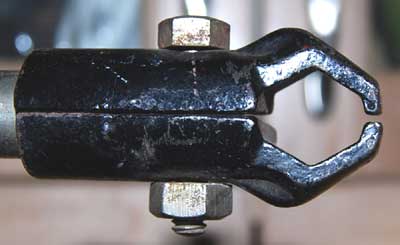 Coleman began selling the Whirling Hand Demonstrator to dealers in 1922 so they could demonstrate the safety of Quick-Lite lamps in any position by rotating the lamp. The clamp (bottom) holds the hexagonal valve securely. The embossing (middle) is at the top of the cast iron stand. This device is in Jim & Jan Nichols’s collection.

Model CQ 333. The sales literature lists this lamp as the combination shown. It was sold complete with shade and large “Protect-a-lite” screen. This lamp is also in the collection of Dwayne Hanson. 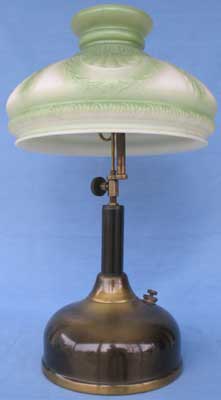 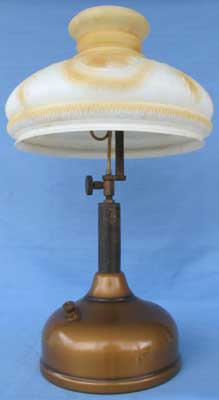 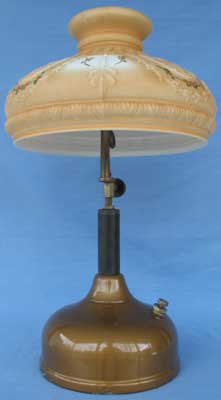 Coleman also painted the brass founts, handles, and perhaps the valves of the CQ lamp in three colors – Flemish Brass (left), possibly Antique Gold (center), and Roman Bronze (right) in the 1920s. The fount color descriptions in Coleman literature are vague and confusing and don’t match the images in those publications (Vantiger). These three lamps, in the late Dick Sellers’ collection, are all undated and have #335 shades.

The Model CQ was made with a variety of shades. Here it has a 335A fringed shade. The fringe is reproduction material on the original painted glass. This lamp is in Jim and Jan Nichols’ collection. 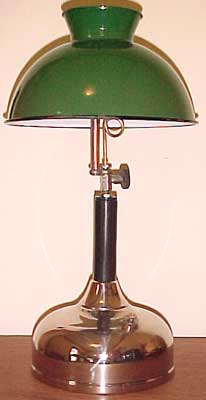 Coleman made the Model 532 for the Sunshine Safety Lamp Co. Kansas City, Missouri. It is similar to the CQ but has a wood handle and the generator nut threads are female rather than male as on the CQ. This lamp, with the original shade, is in Shirley Willard’s collection. 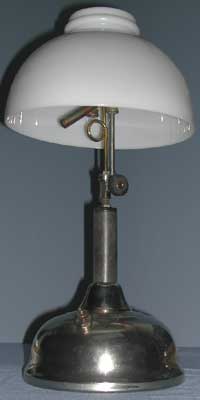 These lamps were made by Coleman for other companies. The first lamp (left and center) is a ML-216 (Vantiger), stamped Arcolite CL 513 on the bottom of the fount and was made for their Yale Light Co., Chicago, subsidiary. It is in Shirley Willard’s collection. Model WZ (right), in Dwayne Hanson’s collection, was made for Sears, Wards, Savage, et al. and has the same burner and 306 shade as the ML-216. 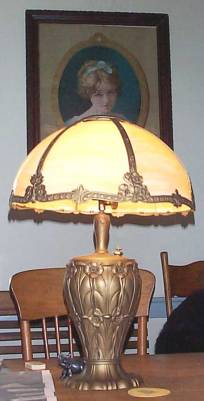 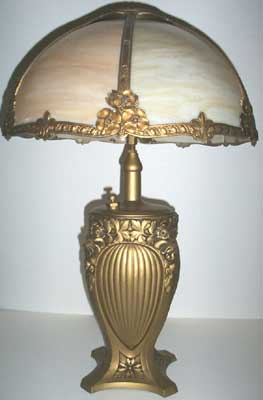 Coleman made few of the De Luxe Quick-Lite lamps (left) and fewer of the De Luxe (Quick-Lite) Parlor lamps (right) in the mid 1920’s. The two-piece shade and pot metal fount covers on the lamp on the left were made by Edward Miller as was the one-piece fount on the right. The late Fil Graff owned the lamp on the left, which is running, and Peter Ecklund owns the one on the right. Note the two different designs on the fount covers.