Coleman continued to make the 220F and 228F after briefly making the 220G. On/By January 1971, they changed the position of the lighting holes in the frame base plate and removed the Sunshine logo stamping on the bottom. This lantern, in Mike Strang’s collection, is dated January ’71.

Coleman started making the 220H by June, 1972, as seen here. This early 220H lantern, in Kameron Bissell’s collection, has the basic differences from an F that are found in all H series lanterns including the offset fuel valve and burner tube fastened to the frame but still has the appearance of the F including the stamped, ribbed base rest. Coleman made the F series lanterns for several more months after making this 220H.

Coleman in Wichita, Kansas made Model 72215 (left) and 72241 (right) for Sears Roebuck and Co. These single mantled lantern models are dated July, 1971 (left) and January, 1972 (right). They have the low profile fount seen on other Coleman lantern models for Sears from this period. The lantern on the right is in Fred Kuntz’s collection 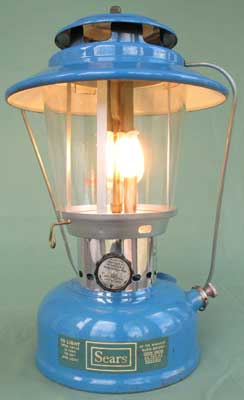 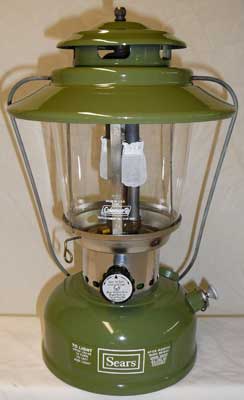 These two Coleman models for Sears, Model 72217 (left) and 72243 (right), are date stamped March 1971 and June 1972 respectively. They are comparable to Coleman 228 models, but have larger founts and tapered globes as Coleman used on Model 275. The globes on these are replacements; the original globes were frosted as on the two above. The lantern on the right is in Scott Wickham’s collection.

Coleman in Wichita made this Model 237A lantern which is date stamped Jan. 1973.
This lantern, in Tim Treutler’s collection, is a 500 cp kerosene fueled model as were the earlier 237 and 237B versions. 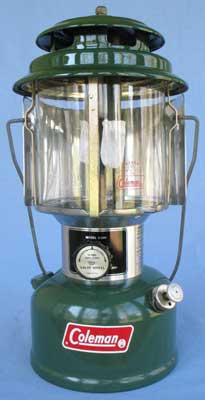 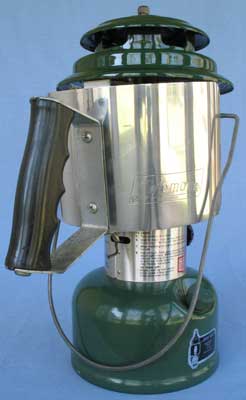 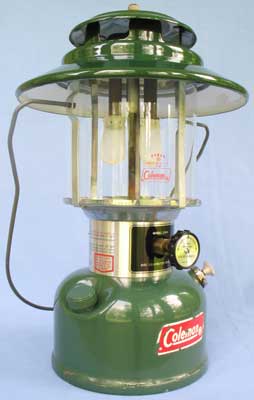 Models 220H (left & center) & 228H (right) were made for a couple of years in the mid 1970’s – here May 1973 and Dec. 1973 respectively. The tip cleaner casting is part of the fuel valve casting in the “H” version and the tip cleaner lever is opposite the fuel valve. Model 220H is fitted with an optional Coleman reflector, 220-703, from this period and is attached to the frame at an upright opposite the fuel valve. Model 228H on the right is in Brandon Kulosa’s collection. 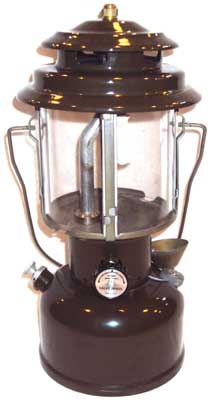 The Coleman Service Center in Wichita has this apparent prototype of a military specification lantern that is constructed primarily of Coleman 220H parts but with a single mantle burner, enlarged tube to the burner cap, and a multifuel generator. The fount, dated Oct. 1975, lacks a parts well. These images were taken by Steve Ream. Patent 3,529,911 granted in 1970 is for this lantern (Kruzan). An earlier prototype also based on this patent and dated June ’69 is on this page. 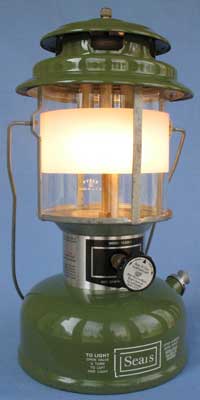 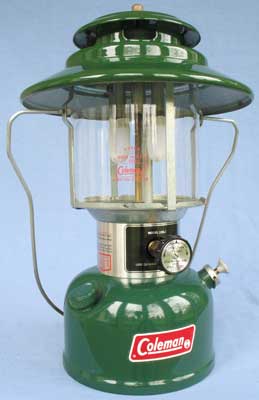 Coleman in Wichita made the 220J (left) and 228J (right) (there were no “I” versions in the series) for about 5 years in the mid to late 70’s. Compared to the “H” versions above, the “J” versions have the burner made from two pieces of pressed steel,rather than a casting. The 220J has an optional plastic parts storage under the fount and is date stamped Apr. 1976; the 228J is date stamped July 1978.

This disassembled 228J dated August, 1979, can be compared here to the first in the series to be produced in March 1928, nearly 51 1/2 years earlier. None of the parts are identical by the end of production although the ball nut and globe are interchangeable
between the two models. 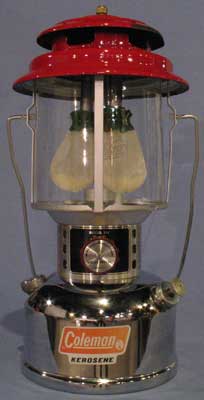 Coleman in Wichita made several export models in the mid 1970’s. One of these, Model 231, is a kerosene fueled lantern that was finished in red and chrome (left) and green and green (right). Both are date stamped Jan. 1976. The lantern on the left is in Bob Fladung’s collection while the lantern on the right is in Agostino Del Coro’s collection.

Coleman made the Model 206 kerosene lantern for the Philippine market as the Model 249’s in that country needed to be replaced. This 550 cp lantern is dated May ’79 is in Mike Bullis’s collection. A dropper to put kerosene (not alcohol) in the preheater is held in an opening in the back of the lantern (the curved tube of the dropper is missing). Pablo Vega was preheating his red fount version of this model, dated April, ’80, when he took this image.

Coleman in Wichita, Kansas, made Model 275 from 1975-79 (above) and 275A from 1980-83. Model 275 was the first US made Coleman lantern to use a Schrader valve for fuel control but still used a wire rod in the fuel air tube in the fount (first image below); Model 275A eliminated the wire rod and simplified the lighting to an off-on only valve (second image below) (Nathan Schum). This lantern, in Herman Mulder’s collection, is dated August ’78.

These fuel line parts are from a 275, dated Dec. 1976. The valve stem (1) only rotates through a 180º arc due to part 2 which fits over the valve stem body (3) and includes Off, Light, and On positions. The eccentric block (4) moves up and down to open and close the Schrader valve (5) allowing fuel to flow up from the fount through the fuel/air tube (6) as well as raise the pricker wire in the generator (not shown) when the valve is partially open. The fuel air tube wire is reduced in diameter near the bottom (barely visible here)
to allow varying amounts of fuel past according to the valve’s position.

These fuel line parts are from a 275A, dated Jan. 1983. The valve stem (1) only rotates through a 180º arc due to part 2 which rests in a channel in the bottom of the valve stem body (3). Note the material reduction in part 2 compared to the mechanism for Model 275 above. Model 275A only has Off and On positions and has a “…a very delicate balance in fume (cold starting/lighting) and liquid fuel vapourisation. This is done by means of a carefully machined orifice at the bottom of the fuel and air tube…” (Nathan Schum). 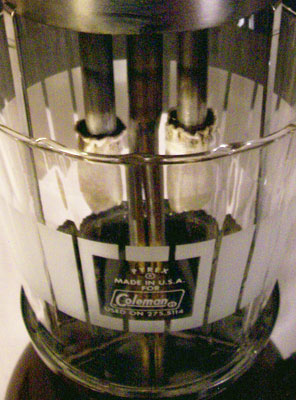 Model 275 was also sold with a specially made “fluted” globe by Service Merchandise in the U.S. as well as other retailers, including Woolworth’s and Jafco, based in Seattle, Washington (Anderson). It was also sold by Albatross, a company in The Netherlands (Mulder). They were outfitted with this globe for a year beginning in mid-1978. Coleman also made their Model 5114B propane lantern with the fluted globe but without the frosted vertical bars. This lantern, dated April 1979, was in the late Glenn Knapke’s collection.

Both of these Coleman Model 201 lanterns are dated September, 1978. The one on the right is marked  with the first letter for army in Hebrew. The markings are typical for the Israeli Defense Force (IDF). These lanterns are in Doron Papo’s collection.

Coleman also made Model 201 in a plated fount version, Model 201-720. The date stamping on the fount bottom is Sept. 1978. This lantern is in Pablo Vega’s collection.