Coleman in Wichita made Model 237 lanterns for a number of years.
This 237, in John Stendahl’s collection,
is date stamped May, 1961.
This model is kerosene fueled, has an alcohol preheater cup,
and is rated at 500 cp. 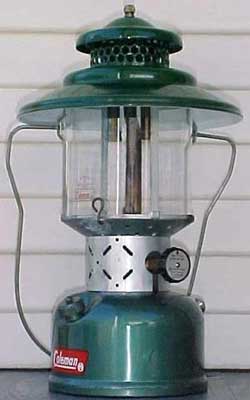 Coleman painted the founts of Models 220E & 228E metallic green for a short time in 1961. This pair is date stamped July ’61, The 220E (left) is in Dean DeGroff’s collection while the 228E is in Ronnie Hardison’s collection.
They have the same features as other 220E & 228E’s of the period except for the fount color. Coleman used a similar paint color on coolers at that time.

This Coleman parts rack dates to circa 1960.
It was used in a former sports shop on the Gulf Coast.
Several of the jars still have parts in them.
The Coleman logo at the top is silk-screened.
This parts rack is in Tim Treutler’s collection 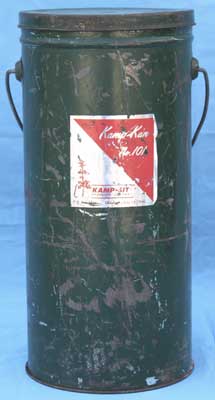 Kamp-Site Products Co., Oklahoma City, Oklahoma,
made this #101 Kamp Kan that will hold a 200A lantern.
The Kamp Kan is a little larger than Coleman’s Handy Pail
from the 1930’s that was made for 242 series lanterns.
This Kamp Kan, in Dwayne Hanson’s collection,
came with newspaper padding dated Jan. 14, 1963. 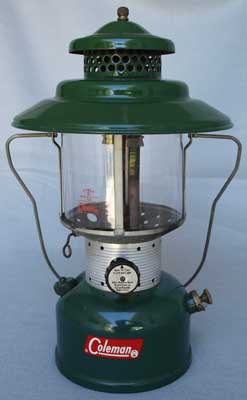 Two months before this 228E was made Coleman
changed several parts including the now ribbed collar
that is usually associated with the 220F & 228F
that followed several months later.
Some collectors refer to these later 220E & 228E lanterns as transitional
This lantern, dated Jan. 1963, is in John Stendahl’s collection.

When Coleman made the first of the above series of lanterns for Sears
(Oct. 1963) the Sears circular decal appeared on one side of the fount (upper image),
and the lighting instruction decal (lower image) appeared under the valve wheel.
Later the two decals were combined as in the above series.
This Model 476.74060 lantern is in Dan Bennett’s collection. 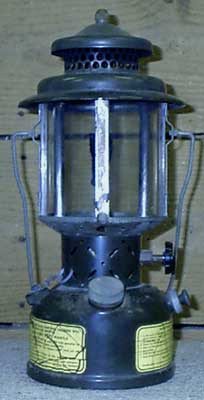 This model is usually referred to as the mil(itary) spec(ification) lantern.
Coleman had the contract to build this model for the military in 1965.
The lantern features a four quadrant globe,
an aluminum generator that feeds the mantle from above,
and a parts well in the fount.
This lantern is in Doug Davis’s collection.

These Coleman lanterns were manufactured for Sears and carry the Ted Williams signature. A modified model 228 but comparable to a model 202
in that it has a stainless steel globe cage and bail and a nickel plated brass fount.
The lantern on the left, 476.7020, is dated Nov. ’65 and is in Fred Kuntz’s collection.
The lantern on the right, 476.70200, in Chad Wise’s collection, is dated Nov. ’67. 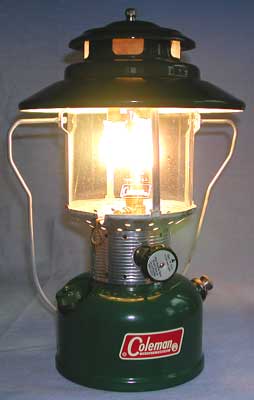 Two of the most common US Coleman models are the 220F (left) and 228F (right).
They can be readily identified by the horizontal ribs on the globe rest
and the 5 rectangular vent holes.
The 220F is date stamped Nov. ’63, the first month this model was produced,
and the 228F is date stamped Feb. ’66.

This mil-spec prototype lantern is dated June, 1969, several years before the later prototype seen on this page. The patented design includes reflective surfaces to keep the temperature lower in the burner parts so that lead in the fuel is deposited in the ventilator and upper globe rather than on the burner parts and lower globe. This lantern is in Marty Edwards’ collection. 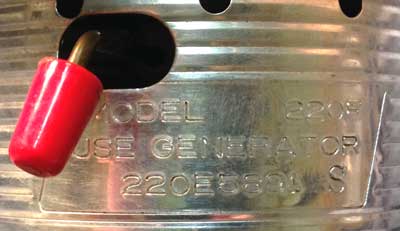 Coleman experimented with Model 220G several years before they went into limited production. This lantern, date stamped July 1964, is identified on the collar as Model 220F but also with an added, stamped S in the lower right corner (lower image).
The base plate center is removable and slotted to receive the offset fuel valve
and a label on the bottom has a special two year warranty.
This lantern is in Kameron Bissell’s collection. 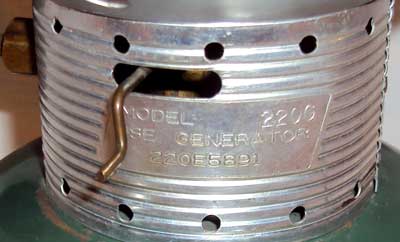 This Coleman 220G, in the Coleman Repair Center,is date stamped Aug. 1969.
Presumably a small number of them were made
to test a change in the incorporation of the tip cleaner assembly
at a right angle in the valve body casting (lower).
These images were taken by Steve Ream.
Please contact me if you have one of these lanterns. 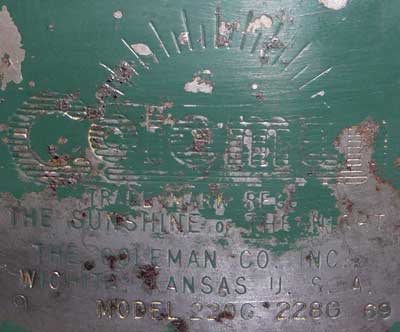 In Sept. 1969 Coleman returned to production of Model 220F
and is correctly identified as such on the collar,
but the bottom stamping identifies it as a 220G (lower).
This lantern is in Kurt Kuiper’s collection.

This well made case holds a 220 series lantern nicely.
Toby Penwell has found two of them in the Columbus, Ohio, area.
The top is fitted to the bottom with bayonet mounts (upper image).
Please contact me if you know who made them
or if you have any information about them.