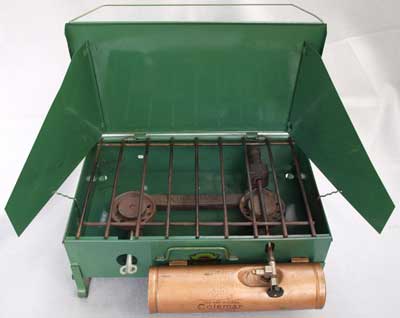 Coleman in Wichita made this Model 415C stove in 1940-43 (Joe Pagan). This stove is in John Stendahl’s collection. The tank is marked Solodur. A sliding key is used to operate the left burner; the burners are cast iron and add considerably to the weight of the stove. 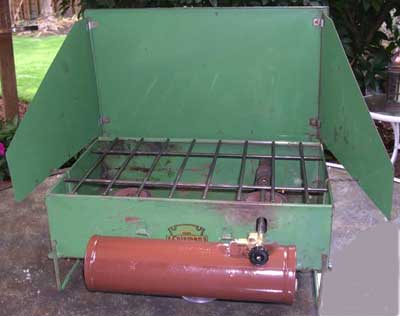 Jules Folgate’s restoration of this Model 417B stove included repainting the tank close to the original color. Coleman made this model in the early 1940’s. The stove features cast iron burners. Jules reports that the stove “fired right up.”

Coleman made these two Model 520 stoves for the military in WWII. The stove on the left and covered in the right image) was one of perhaps only 1000 made in 1941 and has a nickel plated brass tank and brass fittings. The 520 stove in the middle has a steel tank and fittings and little brass; it is dated 1942. These stoves are in Dean DeGroff’s collection. You can see the funnel for the stove in the middle here. 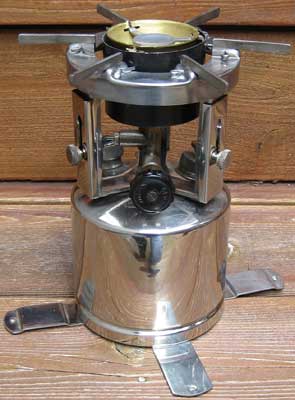 Michael Hawks acquired this unmarked Coleman stove from a retired Coleman engineer who told him that there were two of these prototypes of the 520 stove made in early 1941. Note the adjustable height for the grate by raising & lowering the frame uprights (upper image). The placement of the four legs on the bottom was scored on the metal before the legs were fastened in place (lower image).

The date stamp on this 520 stove is 1944 (lower image, left). Coleman had reduced the number of legs on the model from four (above stoves) to three (this stove) earlier in the war. The stamping on the container (lower image, right) identifies the container manufacturer as C.M.MFG.CO. This stove is in Michael Lenz’s collection.

This Model 521 military heating unit has a 5000BTU burner and is dated ’45 A. The steel can fits over the burner when not in use; it was borrowed from a ’43 stove for this image. The extra generator parts (lower image) can be cleaned for reuse. The stove, in James Cowan’s collection, came with the supports that will hold a much larger pot on the stove.

Another military heating unit, Model 522 is undated but was made between 1942-45 and has one 10,000BTU burner. The diameter of the fount is 8 inches; the unit is 13 inches tall to the top of the legs. Two of the legs are replacements. This stove is in Kyle Marsh’s collection.

The Model 523 military burner unit has two burners. This one is dated 1943, the first year they were made, and only as a burner unit for the first few years (Hill). This one came in a metal case that appears to have been added after the factory. Someone added a couple of brackets to hold a cooking grate across the top. This stove is in Agostino Del Coro’s collection. You can see another one on this page.

This four, in-line military burner unit has the same 10,000BTU burners as the 522 stove above but is meant to be attached to the underside of a large cooking surface by the brackets at each end. Each 34 5/8″ long unit is easily removed for fueling and pressurizing by  loosening the thumb screws at the left end. The combination fuel level/pressure gauge (lower image) is mounted on the  left end of the tank. This unfired unit is in Dave Ashley’s collection. 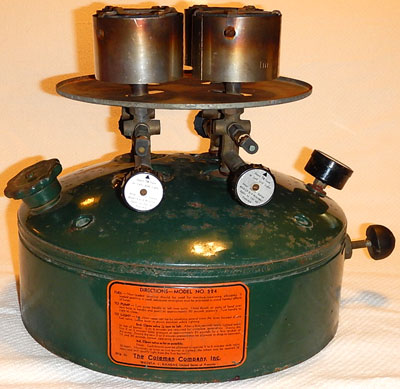 This undated Model 524 has four 10,000 BTU burners. This particular heating unit was manufactured between the mid 1940’s and the early 60’s based on the use of a Postal Zone in the address. Pairs of burners are controlled from opposite sides This military heating unit is in Steve Miller’s collection.

Model 525 has two 10,000 BTU burners. The tip cleaner valves are above the fuel control valves on these Military Heating Units. These military heating units have fittings in the top of the tanks for supporting a grate as on Models 521 and 522 above. This stove is in John Rugotzke’s collection. 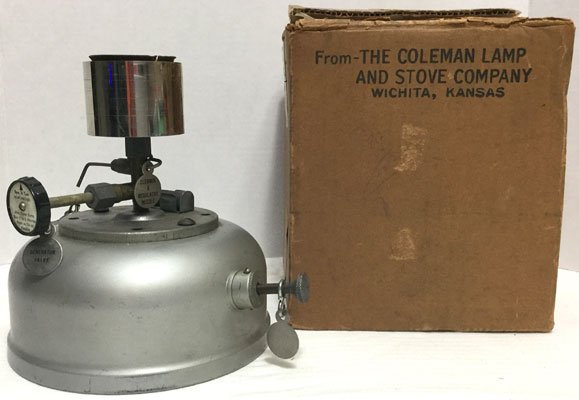 This Model 526 unfired military heating unit came with the shipping box and is date stamped A (we believe for Jan-Mar) 1943. This model has a single, 5000 BTU burner. There are no military markings on the stove or box and we don’t know the origin or purpose of the metal tags on the operating parts. This heating unit is in Michael Hawk’s collection. 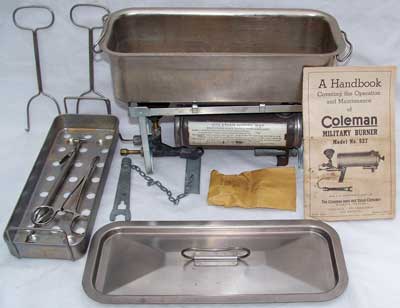 This Coleman Model 527 stove has a gasoline roarer burner that generates 2,500 BTU’s. The wrench on the chain also serves to operate the stove. Two extra generators are in the tube under the tank at the right end. This stove, in John Bell’s collection, includes the instructional booklet with a printer’s date of Dec. 1943. 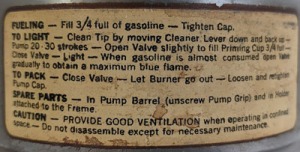 This Coleman Model 528 stove was military model M-1942. This one was made in 1945 for the US Army (middle image). The lighting instructions decal (lower image) is in unusually good condition. This lightweight model had been developed by Aladdin and was first made by them in 1943 for the war effort. This stove with the aluminum container/cups and box (upper image) is in Carlton Blanks’ collection. 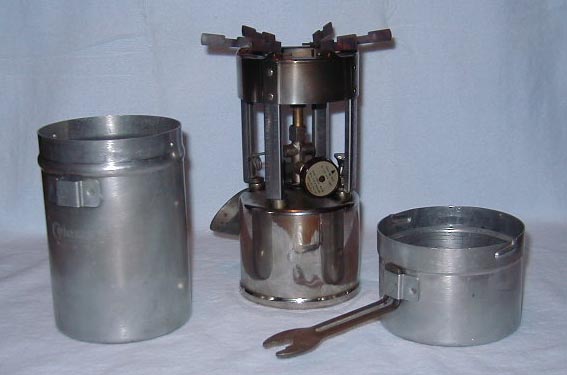 This single burner “GI pocket stove,” Coleman Model 530 is dated A 46 which we interpret to be January-June, 1946. It has a nickel plated fount, stainless steel top and aluminum pots/carrying case. The fuel funnel is attached as on the military version Model 520 The wrench serves as a pot handle for either pot; the pots form covers for the stove. The burners on this model and the earlier WWII 520 are also of the “roarer” type.

Coleman made two versions of this marine/trailer stove in the early 1950s: Model 345 burned kerosene and Model 348 burned alcohol. This undated Model 348 is in Carl Tucker’s collection. The burner on the left was placed on the grate for the photo. Note the walls of the case are higher than the grates to keep objects being heated above the burners.

Two burners were installed in each case to make the complete stove above. The upper image here is of the top of one of the two 347 burners and the lower image is just of the generator from this alcohol fueled burner. The plate below the generator is stamped with the burner number and the fuel required. These images are from a 348 stove in John Morris’ collection.

Two 344 burners were installed in each case to make one model 345 kerosene fueled stove (upper image). The generators used in the 344 burner are the obvious part difference from the 347 burners above. This Model 345 is in John Morris’ collection.

This Coleman Model 413B, in John Stendahl’s collection, was made for a couple of years after WWII. According to John, it is likely that post-war 413B stoves have a brown painted Solodur tank, as on several other post WWII models, and a plug in the top of the tank, which is only found on this model, to the right of the valve (lower image). To see the pre-WWII version of this stove, click here. 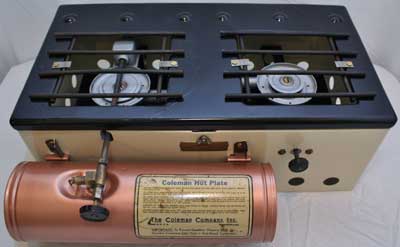 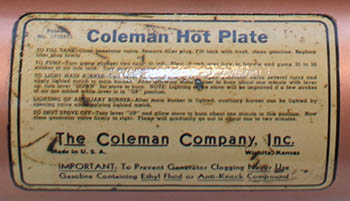 This Model 391A appears in catalogs for several years after World War II. Coleman began using The Coleman Company, Inc. name in 1945 (lower image). The cook top is 19 3/4″ x 10 5/8″. Coleman advertised that the finishes were ivory and black baked enamels. The stove has Band-A-Blu type burners and rust resisting Solodur tank. This stove is in Tim Tucker’s collection.

This Model 395 hotplate is undated but it was made by The Coleman Co. after WWII as Model 391A above. Joe Pagan restored this 3 burner stove which is in his collection. The master burner is on the left; each burner on the right has its own control knob.

Model 413C was manufactured by Coleman beginning in 1947. This stove, in John Stendahl’s collection, is an early version that has a brown painted Solodur tank, a brass model tag on the front of the case, and lacks the Coleman parallelogram decal on the inside of the lid that was added a year later – see below.The flat bar on the cover was designed by Coleman to make the lid a flat work surface. It wasn’t until 1949 that Coleman advertised that the flat bar could be turned over the top to serve as a towel rack (Stendahl). 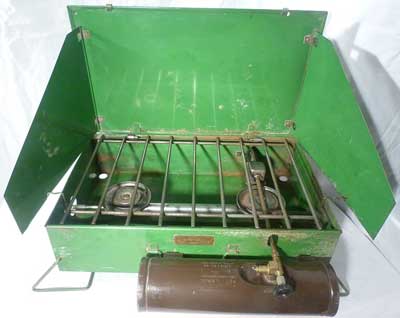 Model 415D appears in the 1947 Jobbers Catalog. This model is instant lighting and features two burners of pressed steel; the burner rings are stainless steel. The rust proof Solodur tank is finished in brown lacquer. The body of this stove is finished in forest green baked enamel. This stove, in Dana Kennison’s collection, was less expensive than 413C above and had a smaller cooking surface.

Coleman in Wichita made the popular 425 series beginning in 1948. These Model 425 stoves, in John Stendahl’s collection, are undated. Coleman used the parallelogram decals inside the top lids on their stove models beginning with the 425 Model above (upper image). This earliest Model 425  has a brown painted tank and has external brackets to secure the legs when extended. Coleman changed the tank finish to bronze lacquer (lower image) apparently not long after introducing the brown painted tank version. 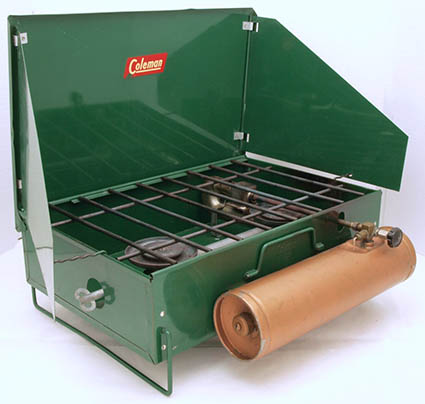 The third version of the 425 differs from the second (above) in having the legs secured by an internal bracket. Note the rivets that hold the bracket above and below the entry of the wire leg into the case. This stove is in John Stendahl’s collection. 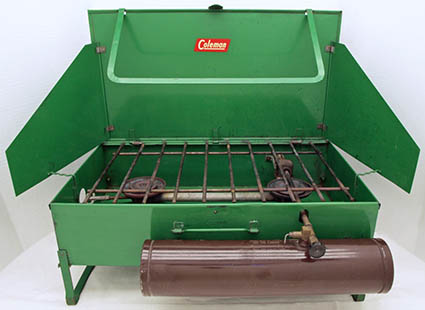 In 1948-49 Coleman changed their Model 413C from the early 1947 version above by replacing the brass tag identifying the model with the model embossed in the front of the case under the handle. While the tank is still painted brown it is described as steel, not  Solodur. The Coleman parallelogram decal appears on a number of these later stoves. This stove is in John Stendahl’s collection. 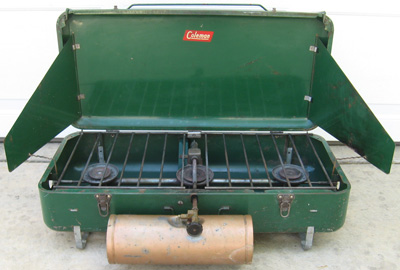 Coleman 426 is a 3 burner model that also dates to the late 1940’s. The controls for the side burners project through holes in each end of the stove case. This stove is in Dave McFarlan’s collection.

John Stendahl dates his 426A stove to 1951 – 53. He describes the corners and edges as having a tight radius This and the towel rack shape are the only differences he found between Models 426 and 426A.

Coleman 413D first appears in the 1950 Jobbers’ catalog and was replaced by the “E” version circa 1954. Model 413C is pictured above on this page and Model 413E can be found here. This stove is in John Stendahl’s collection.