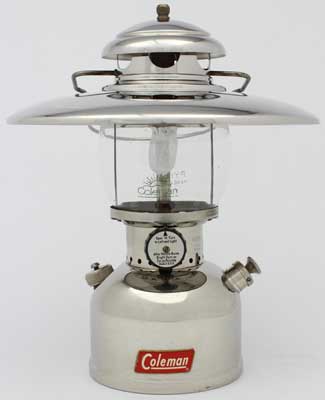 This 200 series custom ventilator and separate shade were beautifully crafted in chrome plated brass by a Japanese collector, Mr. Watanabe. This ventilator and shade are in Tim Treutler’s collection. Tim put them on his favorite Coleman – Model 202 – The Professional. This 202 is dated August 1954, the first month of production of the 202.

Chad Wise created this lantern for his young daughter. The 220F Coleman is dated August 1967 and is topped off with a black vent from a Coleman for Sears. What young girl can resist a pink lantern with a glitter finish?

Ludwig Gebauer used a Chinese made Coleman LED half-scale 200A lantern that was sold in Japan to make this Mikro-Landi lantern. The lantern is now alcohol fueled with a burner that is slightly smaller than one he made for Erik Leger on this page. Ludwig also made the mantles for both of these lanterns.

Former Coleman employee Jeff Hawkins received this 220K lantern when he retired in 1980. Coleman made the lantern special with a chrome plated fount and a red porcelain enameled ventilator. This lantern is now in Dwayne Hanson’s collection.

Bob Johnson created his own USFS lantern by salvaging a 6 3 dated L427 with a corroded fount plating. Bob gave the fount a “patina” paint job with worn areas, scratches, and fuel stains. He topped it off with a modified 220E ventilator. Until he finds an actual USFS lantern, this one will do just fine. 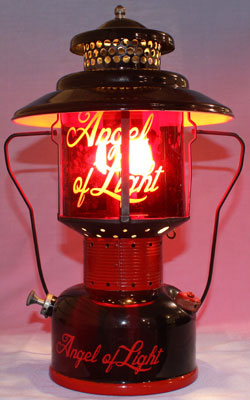 Brian Passananti created his “Angel of Light” lantern using a 228F date stamped 6 66. He substituted the burner assembly from a 228E and topped it off with a Coleman-Sears black enamel vent. Brian also converted the lantern to run on kerosene. Justin Atkinson made the decals and globe.

Jim Grey found this Coleman Quick-Lite lantern – CQ lamp combination at a flea market and has used it a number of times. The previous owner removed an outer portion of the frame base plate for preheating and lighting so the lantern can be used with a Coleman Pyrex globe. 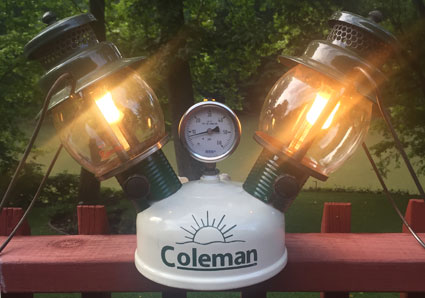 James Robinette used a Coleman 275 lantern fount and mounted a pressure gauge in the opening for the fuel valve after he added two threaded openings for 242 series lantern cores on opposite sides of the shoulder of the fount. He made the collars for the lanterns from aluminum cans. The result is a 600 cp lantern. 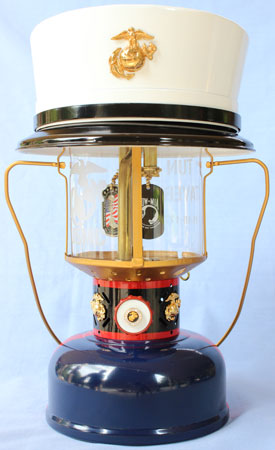 Randy Hayes made his custom Marine Corps lantern from a blue and black Coleman 228 for Sears dated November, 1967, and with a base rest from a mil spec lantern. The lantern is meant to be run without the steel hat that he fabricated and painted.

The International Coleman Collectors Club (ICCC) 25th Anniversary lantern has been a collaborative project between the club and members. Justin Atkinson, whose collection this is in, completed his custom lantern, dated November, 2014, with the special anniversary globe and the fount decal he created for the ICCC for the club project. 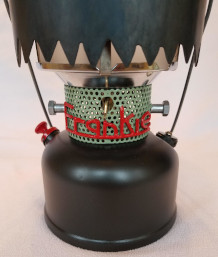 Randy Hayes created a special ventilator aka “a head of hair” out of metal and a “bolted on” collar for his Frankie (literally!) lantern. Randy began with a Coleman 220 dated May, 1973. Note that Frankie is wearing a black tuxedo painted on the fount (top image).

This custom case for a 220C was made for a person in Ohio and is dated Dec. 25, 1945. Inside the top of the case is a place for storing tools and mantles (not shown). The back of the case includes a reflecting surface. The lantern can be removed from the case by raising the lever to the right of the letter A that releases the bail to the left of B. The bracket that holds the case can be removed by lowering the tab to the left of C and unscrewing the thumbscrew above D. The case can be fastened to a horizontal surface (D). This lantern and case is in Phil Rhoades’ collection. 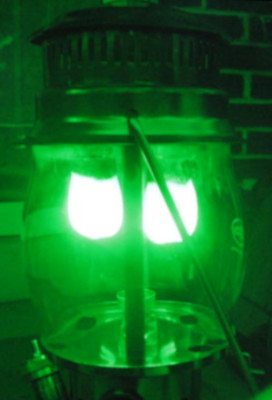 Gerald Cromer attached an HC Lightning Bug lantern head and valve assembly to a 5 pound propane tank on which he had the fittings replaced with a fuel tube, filler tube, and pressure port (right front, upper image). The fount holds approximately 2 gallons of fuel. The two mantle lantern burns brightly! The lower image was taken through the welding glasses in front of the lantern in the upper image. The lantern is running here on kerosene but will also run on gasoline by changing the generator. 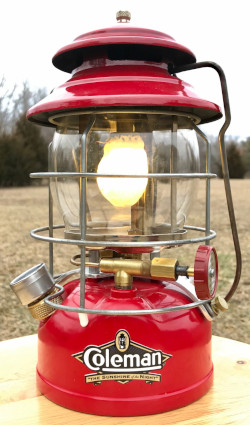 Ethan Cosby made this custom lantern from a 9 79 dated 502 stove fount and valve; a 200A lantern frame, burner, globe, and vent; and a modified NorthStar lantern globe cage. He added a pressure gauge to the filler plug assembly. Ethan made an aluminum yoke (right image) to mount the globe cage and stabilize the valve assembly. He was able to attach the 200A lantern generator directly to the 502 valve assembly. This custom lantern is about 1 1/2″ shorter than a short vent 200A lantern.

Tim Murphy found this 275 lantern in Washington state with pieces of a truck tire and inner tube glued to the bottom and sides of the fount. Tim believes it may have been done to protect the lantern from salt water when it was placed on wet sand during clam digging. You might say it is a way to get more miles out of the lantern.

Zac Elwer found this ice fishing sled with the 200A lantern in northern Indiana. The lantern is dated Oct 1967; it provides heat and light for the fisherman who can sit on the sled. There are two storage compartments behind the lantern. The strap can be fastened to either pull the sled across the ice or carry it on a shoulder. There are two wooden runners on the bottom (left image). 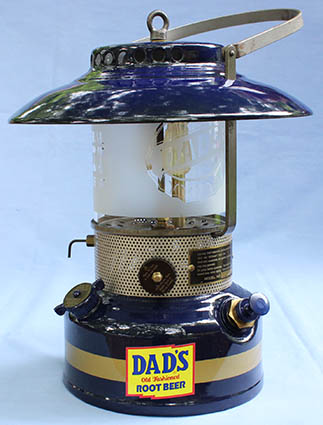 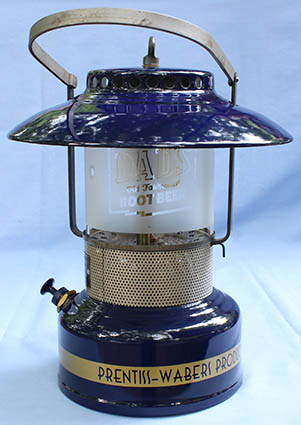 Bill Sheehy customized his Preway L46S lantern with a re-enameled ventilator and matching paint on the fount, as on an early AGM lantern, and a custom globe highlighting Dad’s Root Beer complete with a lighting hole drilled in the side (lower image). Bill’s father worked for over 40 years as a driver/salesman in the beverage industry. One of his products was Dad’s Root Beer so Bill decided to honor his Dad, who died in 2018, with this lantern that was made in the era in which his dad was born. 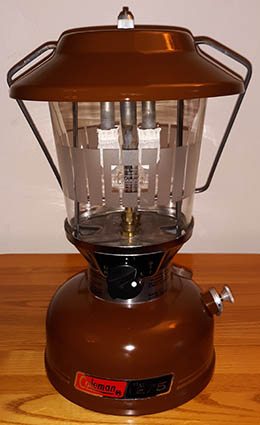 This Coleman 275A is date stamped December 1980, the first year that Coleman made the A version. This one is unusual in having two gold stripes around the lower sides of the fount (lower image). The Coleman decal outline and lettering is not gold but silver. This lantern is in John Leone’s collection. Please contact me if you have a 275 or 275A with gold stripes as on this lantern.

This 200A has been equipped with an “Amish buggy reflector” that came from an Amish area in eastern Pennsylvania. The reflector is made with a strap that clamps on the fount (left image) and has a vertical strap fastened to it that also is held in place with a bracket that is fastened under the ventilator nut. The lantern reflects light out the front as well as through a red glass reflector out the back. Dan Boschen, whose collection this is in, found that the red reflector aligns with the mantle to maximize the amount of red light.