Aktiebolaget Aladdin, Stockholm, made the Ideal, one of a series of Aladdin-Invert lamps, that appears in a 1911 catalog in Christer Carlsson’s collection. The 250 cp light is fueled with kerosene from a tank (right image) that connects to the downward projecting brass connector (middle image). The key on top of the tank goes into the regulator below the key and allows the air  to pressurize the fuel in a separate part of the tank. The tip cleaning mechanism is missing (middle image). 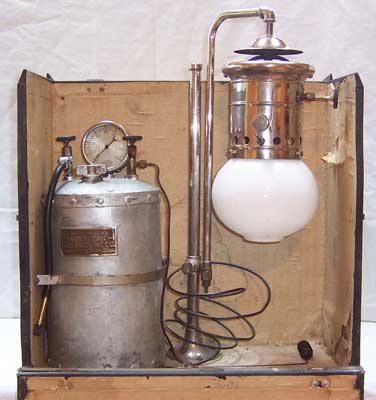 American Gas Machine made this Salesman’s Kit to demonstrate their hollow wire lighting system. The gas tank is approximately one gallon capacity. The light is mounted on an extendable post. This kit is in Dan Gommel Jr’s collection. AGM advertised these in their catalogues in 1912 and 1917.

This AGM Model C65 hollow wire wall lamp appears in AGM catalog 17, circa 1912. The C prefix in the model number indicates that it has a “C” burner. The burner head is the same one that was used on their P66 parlor lamp, which was also offered in the same catalog (McRae). The mounting plate casting includes a groove for the hollow wire to exit the fixture; in the image it is just above the valve wheel. The tip cleaner lever is just to the lower left of the badge (both images). The globe is from another manufacturer. Dean Dorholt, whose collection this is in, has run the lamp, that was rated at 400cp. 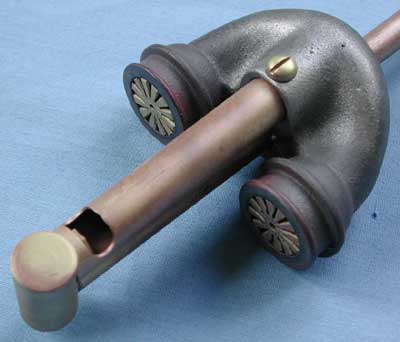 This unmarked hollow wire light was manufactured by the Daniels Gasoline Lighting Co, Paris, Illinois, based on similarities of the burner to a patent awarded to C.M. Daniels and the T-shaped valve on the hollow wire tank below. This light is in Doug Dwyer’s  collection.

This Daniels 2 gallon hollow wire tank The “T-shaped” valves on this tank are the same as on the hollow wire lamp above. Gary Daniels, grandson of Charles Daniels, is the owner of this tank.

This is a Supreme Lighting Systems hollow wire lamp, sans shade, manufactured by the Doud Lighting Co. of Chicago, IL. This lamp includes a rolled portion of  the hollow copper wire used to deliver the gas to the lamp. Hollow wire is flexible copper tubing, 1/8″ in outside diameter. This lamp is in Fil Graff’s collection.

This unmarked hollow wire fixture, in Dean Dorholt’s collection, has a number of similarities of the burner parts (right image) to appliances made by the Enterprise Tool & Metal Works, Chicago, notably their Handi-Lite lantern. The spherical valve body part just below the “A” in the right image is present on the Handi-Lite lantern but is hidden by the frame base plate. Dean believes that the threads above that part once held a similar frame and globe that are now missing from the lamp.

This hollow wire lamp was made by the Gloria Light Co., Chicago, Illinois. It is complete and was restored by Craig Seabrook, whose collection it is in.

The Gloria Light Co. made several sizes of hollow wire tanks for their lighting systems. This tank held several gallons of fuel. The brass barrel on the foot pump is 19 5/8″ long x 1 1/2″ in diameter. This tank and pump is in Loren Abernathy’s collection.

This Gloria hollow wire chandelier was found in Australia by Albert White and restored by him. The Gloria Light Co. of Australasia outlasted the Gloria Light Co. of Chicago, Illinois, USA, according to Neil McRae. This Model 40 was rated at 1000cp and was a combination of two Model 20 lights.

The stenciling on the side of this hollow wire tank reads: Marvelite Lighting System, Incandescent Light and Supply Co., Wichita, Kas., Tested at 50 Pounds. Incandescent Light & Supply Co. was purchased by the Coleman Lamp Co. in 1914. This tank is in Bruce Dolen’s collection. 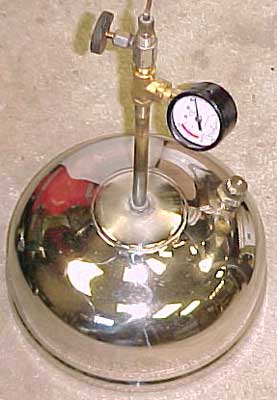 Ronnie Hardison was able to run his No. 42 Knight Light chandelier using a Coleman CQ fount with a pressure gauge (lower) as a fuel source. We believe that Knight Light products were manufactured by the Gloria Light Co., another Chicago company. A patent date stamped on the cowls is March 15th, 1912.

This hollow wire tank was made by or badged for the Knight Light Co., Chicago, Illinois. The capacity of this tank, in the collection of Fil Graff, is approximately 5 gallons.

Lancaster Lanterns, an Amish lighting company in Pennsylvania, made this Model 400 burner in recent years. The hollow wire pipe was probably made by a local Amish shop  in the Berne, Indiana, area where this fixture was found. The Amish in many communities are deciding to convert from kerosene systems such as this to propane light systems and battery powered LED lighting. This light is in Doug Dwyer’s collection.

This Little Wonder Light Co. tank was tested to 50 pounds (lower image). The tank includes a gauge marked U.S. Gauge Co., N.Y. that registers up to 50 pounds, two fittings – one to attach a foot pump to pressurize the tank and the other to distribute the gasoline to the lights in the system, and a filler plug (not seen in the lower image). The 10 gallon tank would have been filled about halfway with gasoline then pressurized to run the lights in the system for several nights. This tank is in the Vigo County Historical Museum, Terre Haute, Indiana. 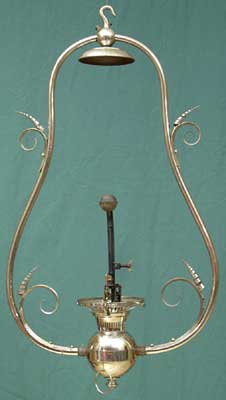 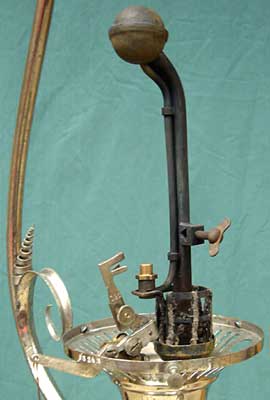 Aktiebolaget Lux, Stockholm, Sweden, made this Lux DHF hollow wire light, at least as early as 1908 based on catalogs in Christer Carlsson’s collection, who also owns this light. The hollow wire connected to the light at the angular fitting above left of the smoke bell. Fuel rose up the large tube to the ball on the burner (right) before returning to the base of the burner in the small tube as an air-fuel vapor. The light lacks the flame spreader and mantle that were held in place by the wing bolt to the right. 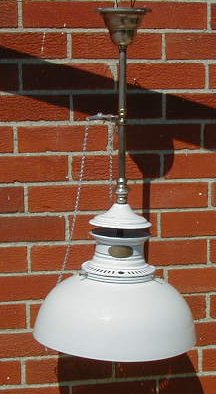 The Nagel Chase Manufacturing Co. of Chicago made this Model 130 lamp around 1912-1920. It is a dual mantle 400 cp model. This lamp is in Bob Frank’s collection.

This Wizard Lighting System hollow wire tank, made by the Nagel Chase Mfg. Co., is in Bruce Strauss’ collection. The cylinder is 24 1/2″ tall x 10″ in diameter making it an 8 gallon tank.

Nagel Chase also made kerosene fueled lights, Model 145 (left) and Model 147 (right), which appeared in 1913-1919 catalogs and were rated as 500cp then 300cp in later catalogs. The globes are Nagel Chase also. These lights are in Albert White’s collection and were found in Australia; they may have been partially constructed using parts by the Wizard Lighting Co., Sydney (see below).

This Model 175 Nagel Chase hollow wire light (left) sans shade is in Neil McRae’s collection. Neil dates this from 1912 to the mid ’20’s and notes that the same burner (right) was used for gasoline or kerosene but with the latter requiring a supplementary generator heater tube as seen here that curves around the air intake.

Fil Graff owns this No. 444 hollow wire light that was manufactured by National Stamping & Electric Works, Chicago, Illinois, circa 1911. This single mantle light was rated at 400 cp. The spherical 982 Alba globe is not present.

Dwayne Hanson ran his No. 200 hollow-wire light that was manufactured by National Stamping & Electric Works, Chicago. Catalog 69, circa 1911, refers to this model as the Nulite Special Residence, noting that the light output can be varied from 50 to 500 cp. The light came with Nulite’s Q.G. opal globe as seen here. 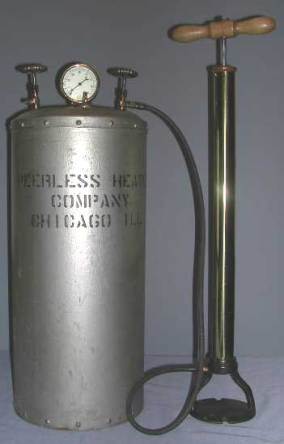 This Peerless tank held approximately 2.5 gallons of gasoline, half of the tank’s volume. This tank held enough gasoline to fuel a lighting system in a large home or small business for several days. The foot pump forced air into the tank and pressurized the gasoline which flowed out through the hollow wire to the ceiling lights. This part of the system was often kept in the basement or a utility area. The hollow wire would have been hooked up to the valve on the left. This tank is in Doug Dwyer’s collection.

The Pitner Gasoline Lighting Co., Chicago, Illinois, made this No. 3000 hollow wire lamp that is in Henry Plews’ collection. Preheating the mixing chamber involves inserting an alcohol torch into the slot in the burner housing (middle image) that is just below an observation hole. A screw on the left of the slot is missing and the globe is not original to the lamp.

This No. 7 hollow wire tank was made by The Pitner Gasoline Lighting Co., Chicago, Illinois. The tank, in Dwayne Hanson’s collection, has a 6 gallon capacity. The gauge registers up to 20 psi. The Pitner badged pump came with the tank.

Standard-Gillett Light Co., a Chicago company that sold hollow wire lighting also sold tanks with a very similar design and the Standard name. Standard-Gillett was purchased by Nat’l Stamping circa 1912, so we believe this National Stamping & Elec. Works tank dates to after that purchase. This 3 gallon tank is in Glenn Knapke’s collection.

A Reliable Lighting System arc light manufactured by the Rice-Knight Manufacturing Co. Ltd., Toronto, Canada. This hollow wire light, in Roland Chevalier’s collection, has a replacement heat deflector and globe. It is connected directly to the fuel line with a support wire. The badge (right image) is on the lower right arm of the light. 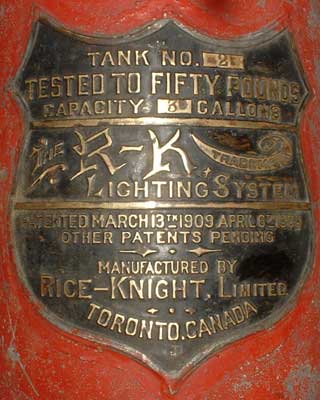 The Rice-Knight company made this No 2 hollow wire tank with a 3 gallon capacity, Larry Healey, whose collection this in in, has researched the company’s history and learned that the company was relatively short-lived, from 1909 to 1914, after which the principals, Harold A. Rice and Harry W. Knight, moved on to other manufacturing interests. So far as we know they only manufactured or sold hollow wire lighting systems. 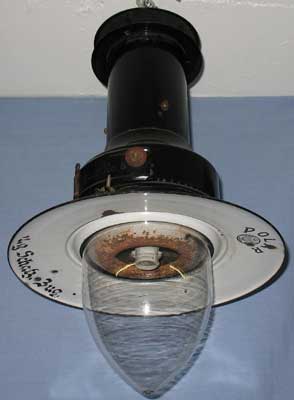 Eugen Schatz, Zug, Switzerland, made this Hasag Polar No 5 hollow wire light. The equivalent donut lamp produced 800-1000 cp. And probably could be fueled by either gasoline or kerosene. This light is in Ruedi Fischer’s collection. 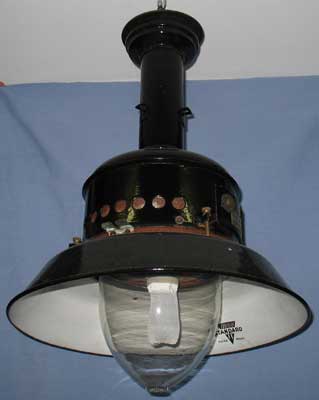 Eugen Schatz also made this Standard brand light, that was run on gasoline. This lamp, in Ruedi Fischer’s collection, has brackets on the metal column so that it could also have been made into a donut lamp model.

The Standard Gillett Light Co. existed in Chicago, Illinois, from 1906 to 1911. The address on this hollow wire tank, 930 N. Halsted, tells us that this tank was manufactured between 1906 and 1908. This 5 gallon capacity tank (1/2 gasoline & 1/2 pressurized air) is in Jon Schedler’s collection.

This is a salesman’s demonstration kit of a Tures Mfg. Co., Milwaukee, Wisconsin, hollow wire lighting system. The badge on the light also has a Patent Date of January 26, 1904. This kit is in Jerry Engbring’s collection.

Unic-Lumière, Paris, France, made this Model 5 hollow wire lamp. This gasoline lamp, in Henry Plews’ collection, was apparently a salesman’s sample (left image) as it came with spare parts and with a small tank. The lamp may have been rated at 800 cp as it has 4, rather than the usual 3, air intake tubes. The globe is a reproduction Petromax donut lamp glass and the ring that holds the glass is a functional replacement.

This hollow wire light is identified as Wizard Lighting Co., Sydney, Australia. This Australian light has an aluminum ventilator and may have been capable of producing 400 cp. It was made before 1923 and was available as a ceiling light, #57; wall light, #58; and as a hurricane lantern, #59. This light is in Albert White’s collection.