This Handi Kero-Pet lantern, Model-3 was made by the Handi Works Pty. Ltd. in Australia. It has a nickel plated brass fount and black porcelain enamel ventilator. Both the base rest and frame are steel while the burner assembly and air intake tube are brass. The curved glass globe, from Scotland, is marked “HANDI PYREX.” This lantern is in Shinzo Kono’s collection.

The Heinze company, Wuppertal, Germany, had this “Petromax style” 829B lantern manufactured in the Hipolito plant in Portugal. Jürgen Breidenstein, whose collection this is in, dates this new-old-stock Geniol brand lantern from the late 1970’s to early 1980’s. Jürgen believes it was later badged for the U.S. Army from the German Army’s stock. It has a matte finish and is marked Nur für Petroleum, or “Only for kerosene.” 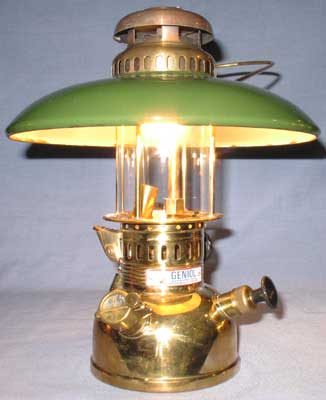 This Geniol 150cp lantern is finished in polished brass and includes the optional 2103 green enameled shade. Werner Löw, whose collection this is in, dates this lantern to the 1970’s -80’s. The lantern is kerosene fueled and has a rapid preheater.

Hipolito Models H-301 (left) unfired with the accessories and H-502 (right) were manufactured by Casa Hipolito SARL in Torres Vedras, Portugal. Model H-301, in Pablo Vega’s collection, is 350 cp and has an alcohol preheating cup; it is comparable to Petromax Model 826 (McRae). Model H-502 is 500 cp and has a rapid preheater; it is comparable to Petromax Model 829.

Casa Hipolito made this Model H 202 lantern which is also badged Force 10, P250K, and Made in Portugal. The construction appears to be the same as the Fama brand D-506 lantern above. This 250 cp kerosene fueled lantern with a rapid preheater is in Peter Wightman’s collection.

Casa Hipolito also made their 500 HK model for Nier-Feuerhand OHG, Hohenlockstedt, Germany. This one, in Jörg Wekenmann’s collection, is only stamped Feuerhand and Germany with the Feuerhand logo on the top of the ventilator. Others also had a collar label identifying it as Lanterne, D-506/500V Automatic, and stamped Feuerhand with the logo on the side of the fount. Jörg believes this model was made for a short time around 1979-80. 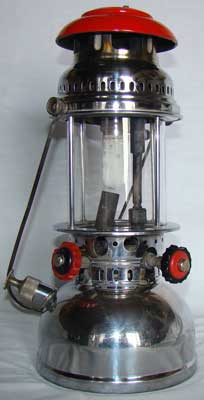 This version of the 250 cp Hipolito lantern features a control knob for the rapid preheater (left) as well as for the fuel line (right). The lantern, in Pablo Vega’s collection,
is only stamped with the Hipolito logo and 250. Other candlepower versions of this dual-valved lantern have been found.

This unmarked lantern, in George Burl’s collection, came with the instruction sheet that was printed in Szeged, Hungary. A similar lantern, in Neil McRae’s collection, is stamped HODA’CS SZEGED. Neil notes that his lantern is nearly identical to Ditmar Model 506. This lantern is kerosene fueled with an alcohol preheat cup and has aluminum ventilator parts.

Hovic Verk in Norway made this Primus Model 1082 under license and apparently did not sell these products outside of Norway, according to Neil McRae, the owner of this lantern. This model burns kerosene, is preheated with an alcohol cup, and is rated at 300cp. 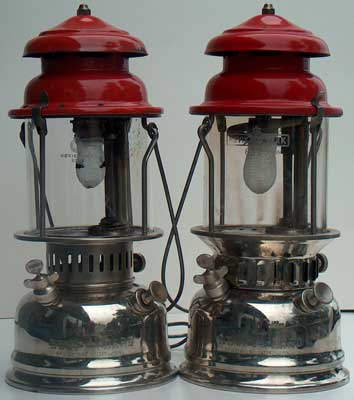 These are older (left) and newer (right) versions of Model 102 Standard lantern made by Hovic Verk in Norway. Note differences in the generators, frame base plates, and collars. While this model superficially resembles Primus models it has several unique features so it is not just rebadged. These lanterns are in Harald Hogseth’s collection.

These 350 cp (left) and 500 cp (right) kerosene fueled lanterns were made by the Kwong Ming Factory, Peoples Republic of China and sold under the Light Brand. The 350 cp lantern has the rapid start preheater while the 500 cp has the alcohol preheat only. These lanterns are in George Burl’s collection.

This unknown lantern model was made by the Lampart company, Budapest, Hungary, perhaps in the 1930’s. The Lampart logo, an embossed sun and three stars, appears on the pump handle. It has a straight generator and alcohol preheater cup. This lantern is in Ruedi Fischer’s collection.

The Lea Hin Co. (Pte) Ltd., Singapore, made this Butterfly brand lantern. This 500 cp lantern, in Hans-Werner Jehn’s collection, is kerosene fueled and is preheated with alcohol only.

We don’t know the Pakistani company that made this Master brand lantern (lower image). It is a “petromax” style lantern rated at 350 cp.  This kerosene model, in Neil McRae’s collection, includes an alcohol preheater cup. The bail and valve wheel on this lantern are replacements. Please contact me if you can identify the manufacturer.

This Nulite design lantern has been modified to project a beam of light and may have been sold as PeeBee, for Phare Besnard, by Maris et Besnard, Paris, France. The lantern has a badge inside the frame stamped Wunder. The interior of the lantern includes a curved reflector (lower image). This lantern, in Bo Ryman’s collection, is missing the glass lens.

Another Peebee lantern based on a Nulite design this match lighting lantern is stamped Peebee on the frame base plate and includes a separate pump attached to the side of the frame as on the preceding lantern. This lantern is in Herman Mulder’s collection.

Translation of the Chinese on the shade and fount of this lantern suggests that the lantern was made in the ’30’s by a Chinese Co. for Molese & Co. of Germany. Originally the brass lantern was covered with a protective? black material. The globe supports have rusted through and no longer connect to the globe base. Images by Neil McRae.

This lantern in the petromax style is stamped Eveready (brand) and A National Carbon Product. It is also stamped No. 575 and 300 cp. This lantern,in Pablo Vega’s collection, includes a rapid preheater.

The Nobel Trading Co. Ltd, Tokyo, Japan, Made this Model NA-100 lantern from 1953 until the 1970s (Kono). You can learn much more about this model on Shinzo Kono’s website. John Rugotzke, whose collection this is in, was able to have some missing parts made including a replacement cylindrical, rather than a tapered, globe as the original. Parts of the burner and frame resemble parts on a Coleman 200 and early 200A. The lantern is kerosene fueled and has a preheating cup.

Padros & Soler, Ltd, Badalona, Spain, made this Focus brand lantern, Model 08. This lantern, in Bo Ryman’s collection, includes a large handled, built-in pump and preheater that probably produces a small flame (note preheater tube through the lower half of the mica globe). The lantern also has an alcohol preheater cup.

Another Focus lantern, this is Model 0.1 which is in Juan Vallina’s collection. Juan believes this lantern model may be their first model. Both the globe and fount were marked by the company.

C.S. Pochee & Sons, an Indian company, possibly made this Model 213 lantern in the 1930’s based on the general style and parts (McRae). The pressure gauge is stamped Made in Germany; the valve wheel and filler cap are replacements. The lantern is a 300 or 500 cp kerosene model with an alcohol preheater. This lantern is in Erwin Schäefer’s collection.

C.S. Pochee & Sons, also made this Model 231 lantern. This model is stamped 300 cp on the fount, and appears in its working parts to be a very similar but a newer version of the lantern above. The manometer and top of the ventilator on this lantern, in Clive Appleton’s collection, are both stamped Pochee.

The Powerlight Co., Winnipeg, Canada, made this Match-O-Lite brand lantern circa 1920. The fount and, I believe, valve stem assembly were made for Powerlight by Nagel-Chase Mfg., Chicago. The burner (right image) was patented by Powerlight but is similar to burners on Pitner Gasoline lighting Co., Chicago, lamp and lantern models. The bail, steel frame base plate/collar, and ventilator were once chrome plated. This lantern is in Dylan Hayden’s collection.

The Indo International Division of Prabhat Udyog Limited, Mumbai, India manufactures several “petromax style” lantern models under the Prabhat Brand. This Prabhat lantern, in Doron Papo’s collection, is a 300 cp kerosene model and is also stamped 426. Other Prabhat lanterns are marked 426 and vary between 300, 350 and 500 candlepower. This lantern has a red plastic sleeve on the bail, a feature that is found on other lantern models from India.