This torch lighting, gasoline Reading Lamp appeared in a 1912 Acorn Brass Mfg. Co., Chicago, advertisement (McRae), and was also sold by the Home Mfg. Co., Des Moines, Iowa. This two-mantled lamp, in Doug Dwyer’s collection, is easily recognized by the angled-down valve stem and wheel.  The mixing chamber casting allows the burner tubes to be mounted in a “Y” configuration (right image), similar to the design in Coleman’s Model R Reading Lamp. If you have one of these unique lamps, please contact me.

The nameplate soldered on the bottom of this lamp says:
manufactured by Albert Lea Gas Light Co., Albert Lea, Minnesota,
however, the burner is the same as those on lighting
made by the Gloria Light Co., Chicago, Illinois.
This lamp is in Loren Abernathy’s collection;
he believes it predates the American Gas Machine Model P71. 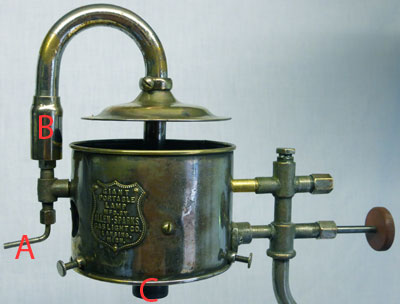 The Allen-Sparks Gas Light Co., Lansing, Michigan,
made this 30″ tall, torch lighting Giant Portable Lamp.
The generator is the upper horizontal tube in the lower image.
The tip cleaner lever, “A”, clears the orifice, inside “B”.
Air is pulled in at the bottom of tube “B”, mixes with fuel,
and is burned on the mantle which is tied on at “C”.
This lamp is in Conny Carlsson’s collection. 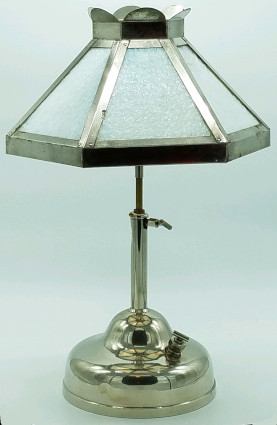 This Astley Parlor lamp Model 5 was also made by the Allen-Sparks Gas Light Co.
This torch lighting lamp was made later than the Giant Portable lamp above.
Model 5 designates the paneled shade on the lamp (left image) (McRae). The plated cup slides up the generator (right image) and is held by a bayonet mount (not seen) to preheat the generator. This lamp is in Doug Dwyer’s collection.

The Best Street Lamp Co. made this Model 94 Indoor Arc Light in the early 1900s. This 600 cp single mantle lamp is finished in oxidized copper. The generator is preheated by preheater pan (right image) that can be swung under the generator when the chimney is removed. This 8 lb. lamp is 30″ tall and has a 5 1/2 qt. fount. The lamp requires a separate pump that is attached at the filler plug (right image). The late Dick Sellers restored this lamp which was in his collection and is now in Greg Diehl’s collection.

The Best Light Co. also made this
Model 300 lamp, circa 1915.
While the finish had deteriorated, this 300 cp kerosene lamp
was in good running order as received by Neil McRae.

Model 237 bracket lamp by the Best Light Co.,
lacks feet to support the fount on a flat surface.
The shade is not original to the lamp.
This 300 cp gasoline lamp is in Neil McRae’s collection.

The Best Light Co. also made these Model 307 table lamps. The earlier version (left image) has an older style fount. The burner (center image) is on this lamp, which is in Greg Diehl’s collection. Note the loop in the generator to facilitate match lighting. Neil McRae believes the lamp on the right, in Craig Seabrook’s collection, is a later production 307 with a low profile fount from the early 1920s. This model was rated at 350 cp.

This Model 309 outdoor bracket lamp appears in a 1921 Best catalog,
and is a gasoline fueled 350 cp lamp, according to Neil McRae, who owns the lamp.
The burner (right image) includes a tip cleaner above the generator tube.
The tank has an oxidized copper finish.
The lamp requires a separate pump.

The Brilliant Gas Lamp Company, Chicago,
made this Triumph gasoline gravity lamp.
The lamp appeared in a 1913 advertisement (Conny Carlsson).
A heat deflector is missing from the top of the tube
that surrounds the tip cleaner rod (right image).
This lamp is in Dwayne Hanson’s collection.

An ad for this “Triumph Stand Lamp”
appeared in a 1911 Popular Mechanics magazine
and rated the mantle as producing 300 cp.
The badge identifies it as a Brilliant Gas Lamp Co., Chicago, product.
This torch lighting lamp has a period correct globe.
Conny Carlsson painstakingly restored this lamp that is in his collection.

The Brite Lite Company, which succeeded the Albert Lea Gas Light Company
circa 1914 and lasted until circa 1920
made this Model 65 lamp, in Neil McRae’s collection.
The company rated this model at 400 cp;
it is seen running here with a Coleman 355 lamp globe. 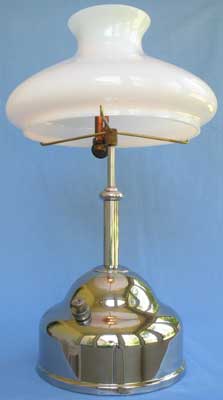 Brite Lite also made this Model 66 lamp
that appears in Catalog 5, circa 1916, of that company.
The lamp is a gas model rated at 400cp.
The glass shade on the lamp (right) is not original to this model.
The lamp on the left is in Casey Jennings collection,
while the lamp on the right is in James “smitty” Smith’s collection.

“The Canton” is an arc lamp that was made by the
Canton Inc. Light Co., Canton, Ohio.
The hanger leaning against the right side of the fount
appears to be an original part of the lamp.
This lamp is in Verne Sullivan’s collection.

I believe the burner on this lamp (right) (right burner cap is missing)
was made by or for the Daniels Gasoline Lighting Co., Paris, Illinois,
after comparing it to hollow wire lighting by this company.
The burner is mounted on a pre-1924 CQ Coleman fount.
Two of these lamps were found not far from Paris, Illinois, by Jerry Lane;
the running lamp (left) is in Glenn Knapke’s collection.
Please contact me if you find one of these lamps.

The brass badge on this lamp identifies it as the Diamond Reading Lamp
made by the Diamond Light Co., Kansas City, Missouri.
The company was in business from 1909 – 1913
based on our examination of the city directories of that period.
This torch lighting lamp is in Jon Schedler’s collection.

The Doud Lighting Co., Chicago, Illinois,
manufactured these lamps.
The two mantle torch lighting Model 1 (left) ran well for Neil McRae,
whose collection these are in.
The one mantle match lighting generator lamp (right)
is an unknown model that has the manufacturer’s stamp.

Unlike others of this model, this Model No. 22 lamp
is stamped Economy Lamp Co. Kansas City (Missouri) on the heat deflector.
The shade appears to be original to the lamp
based on an advertisement for this model dated Nov. 1, 1919.
This lamp, in Doug Dwyer’s collection, is a torch lit gasoline model
with a vertically mounted tip cleaner and horizontal air intake.

The Economy Lamp Co. also used the burner
as on the Model 22 lamp above
on this unknown model.
The tip cleaner wheel and shade holder are missing from this lamp
that has a large and distinctively shaped fount.
This lamp is in Doug Dwyer’s collection.

This lamp is an unknown model by Economy Lamp Co.
As the Economy models below, it will take a Coleman generator,
in this case an R55. This lamp is in Doug Dwyer’s collection.
Like the Economy lamp above, it has an horizontal air tube,
but like the lamp below right, it has the same shade holder and
flat steel eye bolt to hold the shade hanger.

The Economy Lamp Company also made Model 401 (left), which has a nickel plated brass fount, and Models 415 (center) and 417 (right), which have mahogany & green painted brass founts respectively. The generators on these models are compatible with Coleman.
The lamp on the right has a hanging rod, only the bottom of which can be seen in the image, and a flat steel eye bolt to hold the shade hanger. The lamps on the left and right are in Doug Dwyer’s collection; the lamp in the center is in Neil McRae’s collection.

The Foote Mfg. Co., Dayton, Ohio, made this unmarked lamp
during their short period of existence (1908-17).
This kerosene lamp is in Doug Dwyer’s collection.
The lamp has a solid air screw and also requires an air pump
with a flexible hose and threaded tip.

This Model D Foote lamp is so identified
on an original paper label glued to the bottom of the fount.
The lamp, in Doug Dwyer’s collection,
has an “L” shaped valve mounted in the fount (lower image)
to shut off and control the flow of kerosene or white gas to the burner.
Unlike the lamp above, the filler cap on this lamp does have an air screw.

This unmarked lamp, in Jerry Engbring’s collection, appears to also be a Foote Mfg. Co. product. The general features are similar to Model D above
but there are specific differences in some of the parts,
and the burner is more similar to those on Thomas Mfg. Co., also of Dayton, Ohio.
If anyone has catalogs or other documentation of this company,
please contact me.