The Gloria Light Co., Chicago, Illinois, advertised this Oxo-Gas table lamp No. 2 with the art glass shade for $14.00 in a catalog that dates to around 1916. The shade is missing the glass bead fringe. This 300 cp gasoline lamp and shade are in Dwayne Hanson’s collection. Image by Darcy Vantiger.

This Gloria Light Co. lamp has the same burner as the Gloria lamps above and below. The filler plug and Gloria Light badge are under the bell-shaped cover. We have not seen this model in any Gloria literature so Neil McRae has designated it as Model “C”. This fount has two halves seamed around the middle, not seamed between the sides and bottom as on most turban-shaped founts. This lamp is in Tim Haulman’s collection.

This small torch lighting, twin mantle table lamp was made by the Gloria Light Co., Chicago, IL, and sold by the Best Light Co., Canton, OH. It was probably made between 1910-1925. The steel base of the fount of this lamp has rusted through. This lamp is in Neil McRae’s collection. 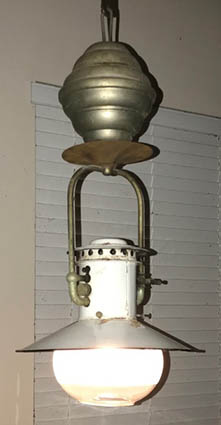 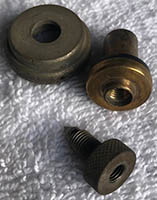 This No. 90 Outside Portable Lamp appears in a 1916 Gloria catalog. The lamp has a single mantle that the maker rated at 500 cp. While the lamp appears to be a gasoline gravity appliance, it has a filler plug with air screw (bottom image) to pressurize the fount. The torch-lighting generator (middle image) was used on a number of Gloria models including the lamps above and below this one. This lamp is in Bill Ivey’s collection.

The Gloria Light Co. included this No. 81 hollow wire lamp in their 1915 and 1916 catalogs. This 500 cp model was advertised to run on either gasoline or kerosene with the appropriate generator. The generator is as on Model 90 above. The lamp came with either a 10″ opal dome shade or 10″ art shade as on the No. 2 lamp at the top of this page. This lamp is in Ron Becker’s collection.

The Gloria Light Co. also made this lamp. This unidentified model in Craig Seabrook’s collection is not marked; Neil McRae has designated it Model “B” based on the burner, until such time as more catalogs appear to give it a more definitive identification. Neil suspects that the turban fount on this lamp and the Knight Light lamp below were made by Coleman.

This torch-lit lamp was probably made by the Gloria Light Co. It was sold by Incandescent Light & Supply as their Model 80 and by Knight Light Co as Model KK.
There are no markings on the lamp. Neil McRae was successful in running this kerosene lamp (right). 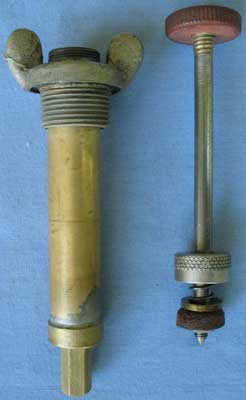 Another torch-lit lamp that was probably made by the Gloria Light Co., likely dates to around 1915 based on its design and parts. The lamp, in Doug Dwyer’s collection, is unusual in having a built-in pump (right), a feature that was not regularly incorporated into lamps until a decade or so later. The lamp is missing the tip cleaner rod and wheel that entered the bottom of the generator.

Imperial Brass Co. of Chicago made this table lamp around 1915-1920. Designed as a kerosene burner, Neil McRae has it running here on white gas (left). The lamp has a generator heater (right) to assure that fuel reaching the mantle is vaporized well enough to burn properly.

Kero Gas Lamp No 2109 (lower image) was made by The Incandescent Light & Stove Co. (ILSCO), Cincinnati, Ohio. The badge on the bottom of the lamp includes the guarantee for the lamp. The burner has slotted burner caps (upper right image) The burner parts resemble those found on Gloria Light Co lamps but are not the same. The filler plug (upper left image) has two air release holes opposite one another.  This lamp is in Conny Carlsson’s collection.

The fount and filler cap on this unidentified lamp are nearly identical to the Incandescent Light & Stove Co. lamp above. The unique burner is missing the generator, shade holder, and valve stem. This lamp is in Jon Schedler’s collection. Please contact me if you have a similar lamp.

We also believe this lamp was made by ILSCO based on similarities to the mixing chamber and other burner parts on this possible ILSCO lantern (McRae). The lamp is fitted with a No. 77 Coleman generator, however the hole for the generator in the mixing chamber is larger. This lamp is in Roland Chevalier’s collection. Please contact me if you have a similar lamp. 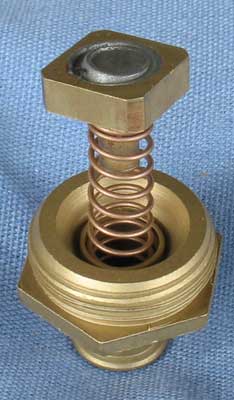 Justrite Mfg. Co. of Chicago made two table lamp models, without a built-in pump, left – in Neil McRae’s collection, and with a built-in pump (center), in Doug Dwyer’s collection. The air chamber may have been added to hide the valve assembly. This model has a unique check valve gasket in the built-in pump that is lead, rather than cork or rubber (right).

This Kaufman Model 404 – Louis XIV Senior lamp was made earlier with a more rounded fount than the ones above. Glenn Knapke, whose collection this is in, found traces of the original Tiffany Verde Green paint on the cast metal handle.

Kaufman made the 404 Louis XV Senior lamp later than the Louis XIV lamp above. This lamp has a painted fount and handle. The Kaufman shade was described in their brochure as a 14″ Hexagon Dome with Sunset panels but was illustrated on a Model 605 lamp (see below). This lamp is in Dean Dorholt’s collection.

The 335cp kerosene “Junior” model lamps are Kaufman’s 604 (left) & 605B (right) Greek or Roman Torch. They are 4″ shorter than the lamps above with a smaller, 1 pint fount  (Neil McRae). Kenny Connolly repainted the steel fount on his lamp on the left which has an ornate slip-on cast iron base ring. The original Verde green finish is on the fount and handle of the lamp on the right, which is in Craig Seabrook’s collection.

The A. G. Kaufman Manufacturing Co. also made this bracket lamp. The model number is unknown but the burner was used on at least a couple of table lamp models, according to Neil McRae, whose collection this is in. This lamp is missing the generator; the air intake is a square, horizontal tube.

This torch lighting Reading Lamp, in Conny Carlsson’s collection, was made by the Knight Light Co, Chicago. It appeared in several ads on November 18, 1910 in Chicago/Cook County and nearby Kentland, Indiana (McRae). This Reading Lamp has a unique burner (lower, composite image). The opal dome globe (upper image) is as the original for the lamp. 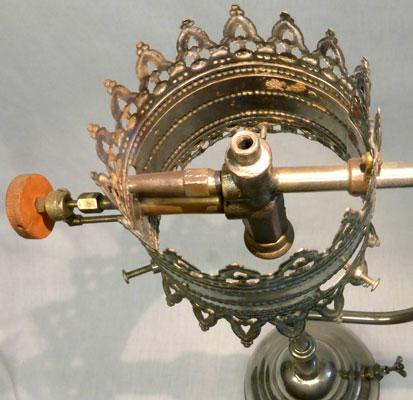 The Knight Light Co., Chicago, made this Model 321 Sunray lamp that they rated at 300 cp. The burner and generator (right image) appear to have been made by the Gloria Light Co., another Chicago company. This lamp, with the original shade, is in Dwayne Hanson’s collection. An advertisement dated 1922 features this lamp. 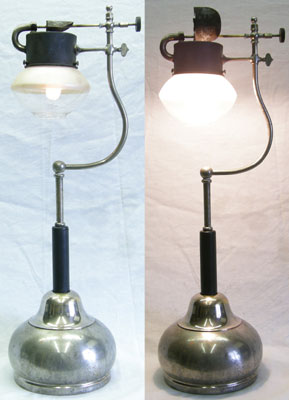 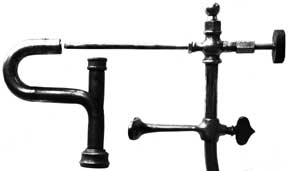 This lamp is badged Knight Light Co. but is also stamped with a patent date that was awarded to Robert Doran, President of the Gloria Light Co., Chicago. Neil McRae, whose collection this is in, has designated it as Model “B” as the Gloria lamp above only the generator on this one is a later design. Neil dates these lamps to 1914-20. Neil fitted the lamp with a Humphrey’s globe. The lower grayscale image shows that the burner has a upward diversion with a “mantle cap” to continuously heat the generator. 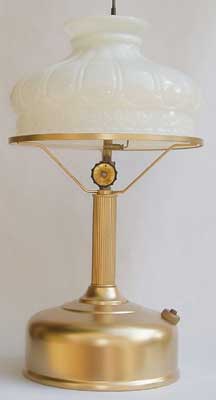 Leacock Coleman, Ronks, Pennsylvania, made the Model 100 (left), and 107ss (right) table lamps that are based on the 1920’s Coleman Quick Lite CQ model (Neil McRae). Model 100 has a steel fount, handle, and shade holder that the late Dan Leeds repainted as the original gold paint. Model 107ss features a stainless steel fount and handle and is dated Aug. 2000. These table lamps have reproduction Coleman 329 shades. They require a separate pump and are match lighting. Leacock Coleman is an Amish company. 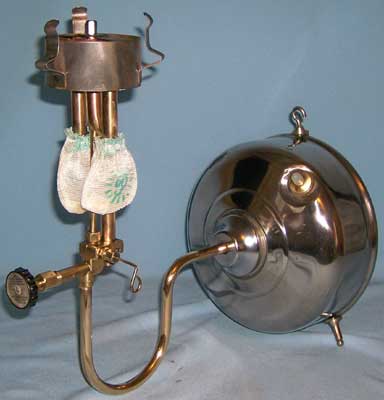 Leacock Coleman (see above) made the fount and handle for this kerosene lamp, dated March 2004, that another nearby Amish company, Lancaster Lanterns, made the burner assembly for. The bracket on the back of the lower air tube, making it Lancaster Model 400B, will support a large Coleman 660 size globe to protect the mantles but allow the lamp to illuminate a large room. The connector on the top of the lamp will accept a threaded rod to hang the lamp from a ceiling. This lamp is in Marty Edwards’ collection. 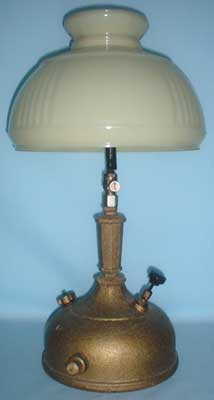 A.J. Lindemann & Hoverson Co., Milwaukee, WI, made these Lind-O-Lite Model table lamps, Model 333A (upper left), and 330A (upper center & lower). The upper right image of the lamp burner is in Neil McRae’s collection There is a carburetor valve in the fount of the 330A, an AGM creation that was also used by Prentiss Wabers and occasionally Coleman. Model 333A (left image) is in the Nancy & George Remkus collection, while the Model 330A lamp, with two Lind-O-Lite shades, is in Jon Schedler’s collection.

Lindemann & Hoverson also made this Model 330A lamp for Montgomery Ward where it was sold as number 2703 in their 1931-32 catalog (McRae). This is a carburetor valved gasoline lamp. The lamp fount and handle are finished in silver paint. This lamp is in Mike Foster’s collection. 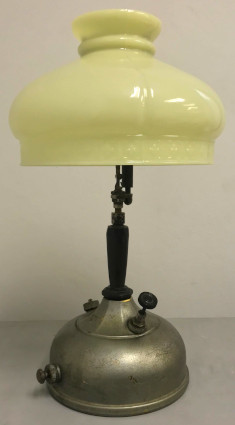 Lindemann & Hoverson also made appliances for resellers. This unmarked lamp appears in a 1931 Montgomery Ward catalog with this Gill Brothers shade (Vantiger). Montgomery Ward’s catalog number for the lamp was 450B2703; we don’t know what number it had at the Lindemann & Hoverson Co. The lamp was described as having a fancy handle and crackled bronze fount finish. This lamp (left image) is in Linus Tremaine’s collection while the lamp’s burner in the right image is in Dean Dorholt’s collection. If you have one of these lamps please contact me.

This Lind-O-Lite lamp is unusual because it is a one mantle model. Neil McRae believes the model number is in the 31_ series as it is like Model 316 but with a different finish. It appears to be earlier than the above model but is instant-lighting, I believe. The fount is steel with a black crackle finish; the generator is a Coleman Q77. This lamp, in Jerry Engbring’s collection, is missing the shade holder.