This Model 4 lantern was manufactured by Nagel-Chase, another Chicago company. This 300 cp model and the one below are unique in having a wooden base rest, in addition to the “stovepipe” ventilator. Nagel-Chase began offering these models circa 1914 (McRae). This Model 4, which is kerosene fueled, is in Henry Plews’ collection. The ventilator on this lantern is not enameled.

These Model 5 lanterns and detached burner from the lantern on the left are the gasoline fueled version of Model 4 above. Neil McRae painted his lantern, left and center, in its original colors including the originally nickel plated globe cage with a matte chrome finish. The lantern on the right, in Doug Dwyer’s collection, has a repainted fount and is unique among these lanterns in having a built-in pump.

Nagel-Chase made this later version of Model 4 circa 1925-30 (McRae). The model no longer had the “stovepipe” ventilator as above but retained the wooden baserest.
This 300cp kerosene-fueled, single-mantle lantern is in John Anderson’s collection.

Another Nagel-Chase lantern, Model 14, was called the Wizard Gasoline & Kerosene Lantern, according to the label in the base of the globe cage. It is in Craig Seabrook’s collection. 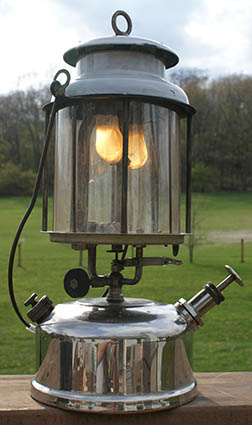 Another Model 14, this lantern has an integral pump. It’s details are otherwise the same as the Model 14 above, including having an air screw to pressurize with a separate pump. Note the tip cleaner lever below the frame and across from the fuel valve. This lantern is in John Rugotzke’s collection. 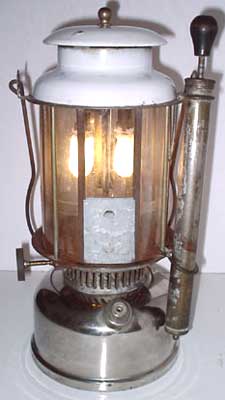 This Nagel-Chase Model 17, in Herman Mulder’s collection, came from the Zwolle, Netherlands fire department, or Zwolle Kazerne in Dutch. The lantern is marked on the base with a shield and the letters Z K. The separate pump on this lantern is held by a lower ring and an upper chain when not in use. This model also came with a built-in pump.

This version of the above Model 17 was made for Montgomery Ward and advertised by them in 1930 and ’31. It was sold as their number 486F2288 without a built-in pump, as seen here, and 486F2290 with a built-in pump (McRae). The ventilator on this version is not enameled. This lantern is in Doug Dwyer’s collection.

National Stamping & Electric Works, Chicago, also made their No. 39 Arc Lantern for the Sunshine Safety Lamp Co., Kansas City, Missouri. The Sunshine Safety stamping is under the base rest (lower image – Drew Bolton’s collection). National Stamping described the lantern as 19″ tall with a weight of 10 pounds and a fuel capacity of 3 pints. They rated the lantern at 125 – 700 cp. Craig Seabrook, whose collection this is in, had the steel ventilator re-nickel plated but not the brass sided fount. This is a torch lighting model with a tip cleaner above the generator.

National Stamping & Elec. Works made this version of their Storm King Model for International Light Nov. & Spec., Co., lower image) also of Chicago. This torch lighting lantern, circa 1915, is a single mantle model. Note the early bail attachment formed with loops in the opposite frame uprights.

Nat’l Stamping & Elec. Works also made appliances for international companies. Archibald Hoey found this Nulite Storm King, a one mantle, torch-lighting model rated at 200 cp, with “all the bits” at a car boot fair in the UK. The paperwork reveals that it was sold by Firma Joseph Rute, Soerabaia, now Surabaya, the capital of East Java province, Indonesia. This lantern is in Neil McRae’s collection.

Another Storm King lantern by Nulite, This one includes a factory made reflector that clips onto opposite frame uprights just outside the mica globe. We have not found this accessory in any Nulite literature. This single mantle lantern, in George Remkus’ collection, was rated at 350 cp in Nulite literature printed in the US.

This Nulite lantern made by National Stamping & Electric Works of Chicago is stamped Sunshine Safety Lamp Co. Kansas City, Missouri (lower image). As Nulite it is Model 2; a two mantle torch lighting model with a tip cleaner (upper right image). I don’t know the name or model that Sunshine Safety gave this lantern. This lantern, in Dwayne Hanson’s collection, has a nickel plated brass fount that has stress cracks and cannot be run.

The Nulite Model 18 model was apparently made in four different versions – 1 quart (above) and 2 quart (below) founts as well as with and without (above) an integral pump. This 300 cp model is torch lighting. The mica globe is unusual with a brass frame. This lantern is in John Stendahl’s collection.

This Nulite lantern is their Giant, the larger of two Model 18’s, with the two quart fount. It was possibly sold by Piepgras. Piepgras advertised this model as a poultry lantern approved in a test conducted by Poultry Tribune Magazine. This lantern is in the collection of Ed Franklin. 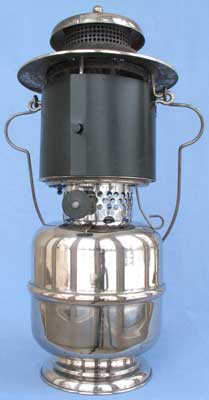 This Model 18 Nulite Giant includes a metal attachment that wraps around the globe to convert the lantern to a heater. In this way the lantern could be used to keep a poultry house (or other room) warm overnight. The lantern, in John Rugotzke’s collection, was advertised to run for 24 hrs and heat an 18′ x 18′ poultry house about 20 degrees  warmer. 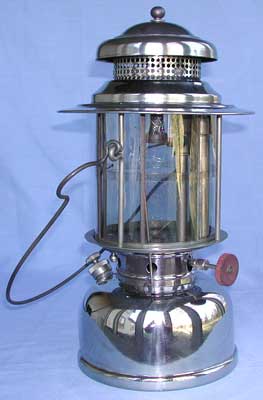 Although this lantern has many of the same parts as the Nulite Models above, it is stamped Acorn Brass Manufacturing Co., Chicago, Illinois, on the bottom of the fount.
Acorn Brass sold this torch lighting Uni-Lite Model 350 circa 1915. This 300cp model has a tip cleaner lever as on the Model 18 above. This lantern is in Doug Dwyer’s collection. 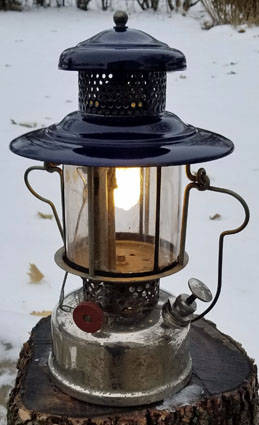 This Nulite lantern is similar to Model 18 above but has two unique features: The ventilator is blue enameled above and white enameled below and the integral pump and filler plug are mounted in the fount at approximately right angles to each other rather than directly across from each other as on other Nulite models (right image). This lantern is in Tim Helmer’s collection. Please contact me if you have a Nulite lantern with a blue enameled ventilator and similarly placed pump and filler plug. 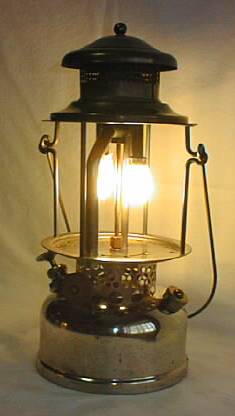 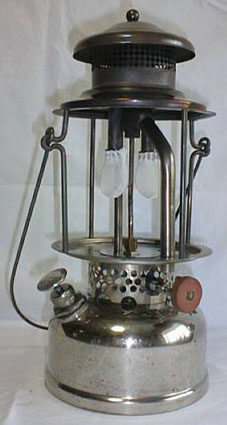 National Stamping & Electric Works, Chicago, Illinois, often didn’t put any identifying name or numbers on their appliances. This Model 5MW Nulite lantern, in Shinzo Kono’s collection, is match lighting and has an integral pump. Model 5MW was also sold without an integral pump. Neil McRae dates this version to 1919-1923.

Neil McRae believes this is a variation of Nulite Model 2M (for match lighting) that dates to around 1923. This lantern, in Mike Bullis’s collection, has ceramic burner caps, which are unusual on US lighting products, and a 110 burner. The air tube is behind the frame support; the mica globe was removed for this image.

Nulite Model 3MW is also match lighting, gasoline fueled, and has the 110 burner as Model 2 above but includes an integral pump. The burner uprights are stamped for Nulite and National Stamping & Electric Works, Chicago. This lantern is in James Sizemore’s collection.

Neil McRae believes Nulite identified this lantern as Model 2M but with the horizontal air tube and frame base plate as Model 2M/16 below. It is different from Model 2M/16 below in having a different frame to support the vent and lacking the word Nulite stamped on the lower vent. The frame uprights on this lantern are stamped with the company name and Nulite. This lantern, in George Remkus collection, appears in a Nulite brochure, circa 1931, (Vantiger) but without a model number. 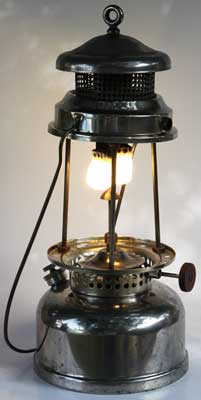 The design for this Model 2M/16 match lighting lantern (McRae) was patented on May 9, 1922 (1,415,180). The patent includes an horizontal air tube (right image) that projects through the side of the ventilator and a conical frame base piece that deflects heat. The only place this lantern is identified as Model 16 is stamped in a reseller’s brochure, not in any Nulite literature. This lantern is in Dwayne Hanson’s collection.

This unknown model by National Stamping & Elec. Works is instant lighting. Note that the generator superficially resembles a torch lighting generator but has a nut at the base of the tube for easy removal. Nulite’s instant lighting models are unique in having the tip cleaner below the generator tube. The late Bob Meyer restored this lantern that was in his collection and is now in Dean Dorholt’s collection. Please contact me if you have a two mantle Nulite lantern with the tip cleaner below the generator tube.

This is Model 8, the one mantle Nulite instant lighting version of the above lantern. The burner, generator, and air tube are different from the two mantle version above. It has a tip cleaner mounted below the generator tube, indicative of the presence of a pricker rod that passes through the generator tube. When the valve is opened (counterclockwise) the stem moves into the valve body, an indicator that it is instant lighting (Bob Meyer). The lantern and globe labeled Storm King (left) are in Roger Haynal’s collection. Roger repainted the steel fount that had lost its chrome plating.