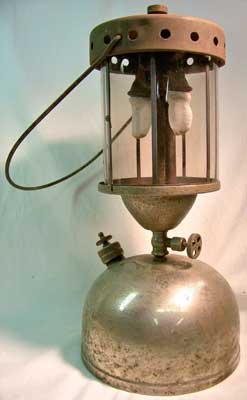 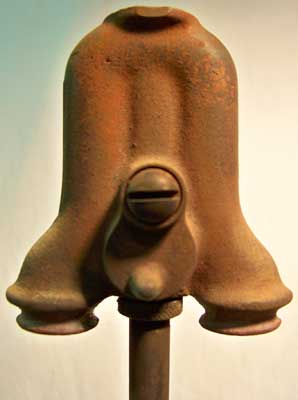 This unmarked lantern was probably made by the Pitner Gasoline Lighting Co., Chicago, IL, based on the burner caps, orifice and filler cap,
that are all the same as on that company’s Model 2001 lamp.
The cast iron burner (right) has a door to clean the tip on this torch lighting lantern,
which is in John Eggert’s collection. 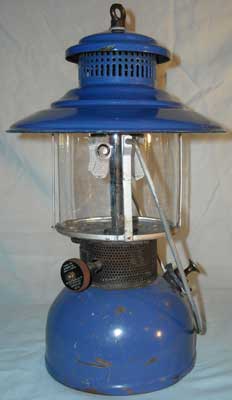 Prentiss Wabers Products Co. in Wisconsin Rapids, Wisconsin, made these Model L13 lanterns in 1933 (both blue and green versions; Pagan) and 1934 (green version only; catalog). This early model has the pump combined with the filler cap, as on Model L14 (below left). In their later models these two parts were separated in the fount. The lantern on the left is in John Shook’s collection. while the lantern on the right, that came with a factory wrench, is in John Rugotzke’s collection.

Prentiss Wabers’ (Preway) Model L14 was a single mantle gasoline model with a combined pump-filler plug opening. Presumably the narrow-brimmed ventilator lanterns preceded the wider brimmed ventilator lantern. As with Model L13 above, these lanterns were made in both blue, in John Rugotzke’s collection, and green finished versions, in Bruce Strauss’ collection, in 1933 (Pagan).
The globe on the L14 on the left is a Preway mica globe with a grommeted lighting hole.

Model L14A (left image) differed from Model L14 above in having separate openings for the filler cap and the pump. The mica globe has a grommeted lighting hole. This model appears in their 1935 catalog. This lantern, in John Rugotzke’s collection, is badged for Montgomery Ward & Co. Model L44S (right image), badged for Sears Roebuck & Co., has the same burner as the Model L14’s and is in the 1936 Preway catalog. 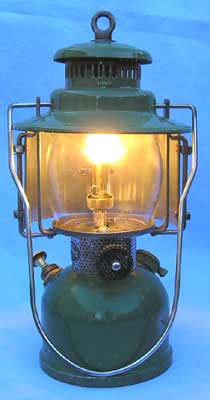 Another Junior model, L47PA uses gasoline or kerosene.
This lantern, in Joe Pagan’s collection,
has an original Macbeth globe that was made with a hole for lighting.
The lantern also has a well-made two piece reflector
that can also be swung open to broadcast the light.

Preway Model 742-43 with a green painted fount (upper left), 742-431 (upper right) and 742 43-9 with a nickel plated fount (lower); all made for Sears. These double mantle lanterns have the original mica globes with a windowed door or lighting hole in the mica globe for lighting. Sears listed these models in their Spring 1936 – Fall, 1941 catalogs (McRae). The lantern in the upper right is in Lem Ervin’s collection
while the lower lantern is in Joe Pagan’s collection. 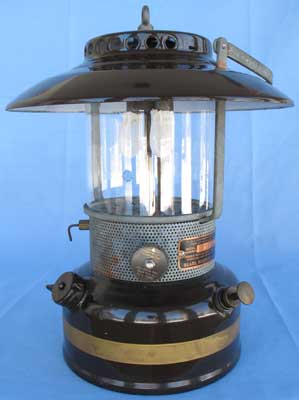 An unusual lantern design from Prentiss-Wabers Co.,
this Preway Model L46S was also made for Sears and sold as Model 742-461.
The globe on this model has a hole drilled in it for lighting the mantles.
This lantern is very heavy,
weighing about 7 pounds. 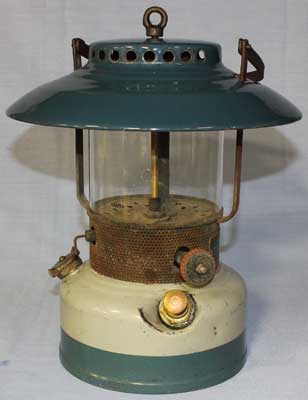 These two Preway models are also stamped L46S as is the lantern above
but are finished in colors
as on Turner Brass Works lanterns with Brooklure labels.
These two lanterns are in Rich Wiersum’s collection.

The Radiolite Mfg. Co., Milwaukee, Wisconsin,
probably began making this 300 cp kerosene Model 15 lantern circa 1915.
The patented mixing chamber with the mantle surrounding the central generator
seems to have been unique at that time (middle image).
The fuel valve is on the left; the tip cleaner valve is on the right.
This lantern, in Tom Weaver’s collection, has a replacement mica globe
and wing nut to fasten the spun steel ventilator.