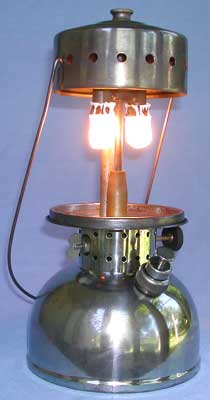 The bottoms of these lanterns are stamped: San Diego Lamp and Mfg. Co., San Diego, California, Patented 1924. A horizontal cut in the brass stem just above the valve on the left (center image) allows air to mix with the gas for preheating. The lantern on the left is in Fil Graff’s collection; while the lantern center and right is in Doug Dwyer’s collection. The mica globe (not shown – right image) pushes up under the ventilator for lighting.

State Machine Products, Dry Ridge, Kentucky, held contracts to build the mil-spec lantern in most years from 1979 to 1991. This lantern, in Dick Sellers collection, is date stamped 1980 and has a sticker on the bottom (lower image) identifying it as property of the US Forest Service “for fire protection purposes only.”

Sunflame Appliances Ltd., Ridgefield, New Jersey, made this Model 105 gasoline fueled lantern that is rated at 500 cp. Lighting directions are in English and Spanish. The lantern is comparable to an AGM Model 3470 (McRae). This lantern is in Rich Wiersum’s collection.

SF Appliances Ltd., Ridgefield, New Jersey, made this Model 106 kerosene fueled lantern, that has lighting directions in English and Spanish. We believe SunFlame models were intended for export. This lantern is in Bo Keller’s collection. Another Model 106, Made in England, can be seen here. 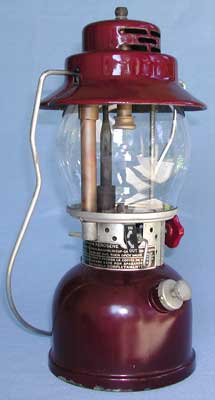 The SF company also made this Model 107 lantern in the 1950’s. It burns either kerosene or gasoline; a narrow preheater is fitted around the base of the generator. This lantern has characteristics of both Akron Lamp and American Gas Machine Companies products
reflecting the merger of those companies in that time period. This lantern is in Dan MacPherson’s collection.

SF Appliances Ltd. also made this Model 109 which is similar to the 107 above. This model has a nickel plated fount and the burner is a more substantial casting. Joe Pagan, whose collection this is in, found this lantern in Bolivia. Someone made a replacement globe from glass strips and aluminum can strips for the globe frame. The pump appears to be a replacement from another appliance.

SF Model 110 is a kerosene only model with a preheater alcohol cup. This lantern, in Bo Keller’s collection, includes the original globe. It is marked Heat Resisting and Made in the U.S.A.

SF Model 112 is a 500cp kerosene fueled lantern that is very similar to the earlier AGM 3470 and SF Model 106 above. This lantern has a chrome plated brass fount and original bulge globe as shown in the instruction and parts sheet that came with it. The paperwork is dated March, 1955. This lantern also came with the  original wrench and alcohol bottle.

These Thomas Kerosafe lanterns, Model M1004,  were made by the Thomas Mfg. Co.,  Dayton, Ohio, and run on kerosene as the brand name implies. The running lantern, in Neil McRae’s collection, is missing the mica globe while the lantern on the right, in John Rugotzke’s collection, includes the mica globe which has two reinforced holes to allow passage of the horizontal air intake tubes. Caps on the ends of the air tubes help prevent insects from entering.

This two mantle “The Milwaukee Lamp” was made by the Tures Mfg. Co., Milwaukee, Wisconsin, in the 1910’s. This lantern, in Don Ostby’s collection, lacks the original mica globe. The vertical rod (right) raises the tip cleaner in the generator. Another version of this lantern lacks this complicated generator. The lantern is also unusual in having a wire guard for the globe.

This is a Model 711 lantern made by the Turner Brass Works, Inc., Sycamore, IL. This lantern has the Turner decal on the fount. Note the hole in the mica globe to light the mantle. This 150 cp model was made in the ’30’s until perhaps the mid 40’s. Neil McRae restored this lantern including repainting. 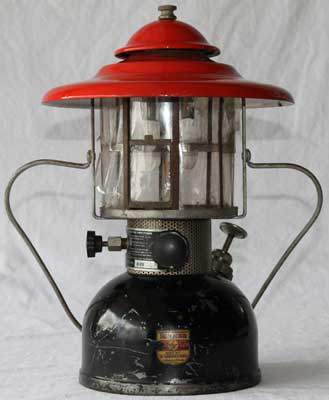 This Turner Model 511 lantern, in Dwayne Hanson’s collection, was apparently the first of the series in this style. The tip cleaner was built into the main valve (right image)
and involved an eccentric section in the stem (below the letter A) that communicated through an oval yoke with the eccentric rod (to the left of the letter A) and then to the generator. The yoke is often broken from the tip cleaner rod on these lanterns. 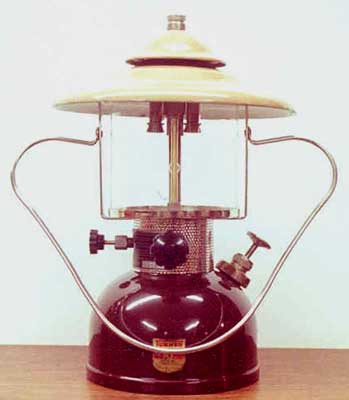 Model X-159 (top), Model 1511 (bottom left), and Model 1512 (bottom right), were also manufactured by Turner Brass. They can be recognized as Turner by their distinctive two valve system. These lanterns are in Craig Seabrook’s collection. 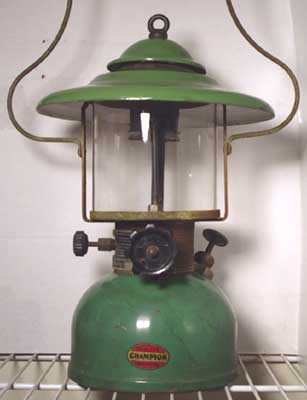 Turner also made Champion appliances, an economy line. These Model 1501 Champion lanterns have some differences: the one on the left, in Doug Dwyer’s collection, has partial frame uprights to attach the bail, mica globe (not in the image), and lacks the Champion decal, while the one on the right, in Thom Kivler’s collection, has a complete frame, glass globe with a lighting hole, the Champion decal and a collar tag.

The tag on this Turner lantern identifies it as Model L501 but Joe Pagan, whose collection this is in, identifies it as Turner Model 1501 (see above). The model number difference is presumably due to its being made for another company, The Lenk Mfg. Co., Newton, Massachusetts, identified on the decal. Joe had a reproduction decal made as the original was well worn.

Turner Brass Works made this 911 Model lantern as an economical alternative to the  1511 Model above. In a product sheet dated March, 1936 they noted that it had the same fount and “fool proof mechanism” as the more expensive model. The ventilator on this lantern is steel with parts chrome plated, not enameled. This lantern is in Doug Dwyer’s collection. 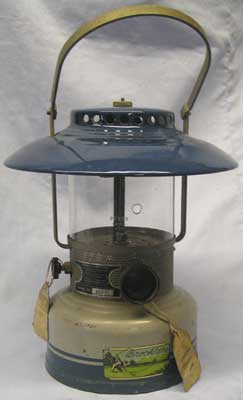 After looking at the preceding images, you can see that these lanterns have elements of both Prentiss-Wabers and Turner models, but were probably made by Turner based on the burner and fuel line parts. They are branded Brooklure on the fount decal and Model 5035 on the globe rest label (lower image); Brooklure was a brand name of Spiegels, a department store chain. The lantern on the left is in Jeff Vandermillen’s collection. The hang tags on the lantern on the right, in Joe Pagan’s collection, are dated December 14, 1939; the globes have holes for lighting.

The above lantern that has been in this space has been identified as made by the Lawrence Mfg. Co., Chicago and can be found on this page.